Please ensure Javascript is enabled for purposes of website accessibility
Log In Help Join The Motley Fool
Free Article Join Over 1 Million Premium Members And Get More In-Depth Stock Guidance and Research
By Adam Levy - Updated Apr 22, 2019 at 11:53AM

A the end of 2017, Netflix made plans to release 80 films the next year. It ended up releasing closer to 100 feature films, documentaries, and shorts over the year.

Netflix also increased its marketing budget for 2018, up about 65% year over year. The increased marketing spend went toward promoting individual content titles, including pushing its series at the Emmys and its films at the Oscars.

The efforts paid off. Netflix garnered 15 Oscar nominations, including a Best Picture nomination for Roma. In total, Roma racked up 10 total nominations, the Coen Brothers' The Ballad of Buster Scruggs received three nominations, and short subject documentaries End Game and Period. End of Sentence. each received nominations for that category. 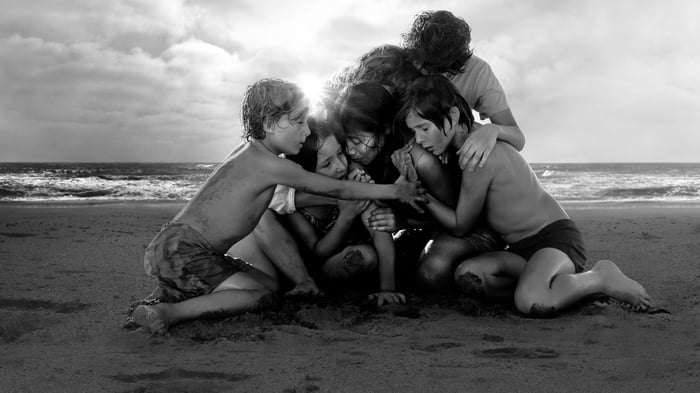 Can you put a price on winning best picture?

Netflix has made a significant investment in Roma. The film cost only $15 million to produce, but Netflix may have spent as much as $25 million pushing it to win the Oscar nomination for Best Picture. That's massive compared with any of the other nominees either this year or historically.

For Netflix, $25 million is a drop in the bucket, though. Its marketing budget climbed to $2.4 billion in 2018. Other studios don't have that kind of money to push for Oscar votes. They spend all their marketing money trying to sell box-office tickets. An Oscar doesn't do much to move the needle at the box office.

But Netflix isn't worried about box office sales. It wants subscribers. And it doesn't care if a subscriber joins its service the day a new original gets released or a year later. As such, the attention an Oscar brings to a film is worth a lot more for Netflix than traditional studios.

The relative lack of competition in marketing made Netflix's blitz for Roma that much more effective. Netflix now finds itself among a list of nominees without a standout favorite to win, giving it a very good chance of taking home the trophy next month.

But why does Netflix care about awards so much?

A big win at the Oscars could do two things for Netflix.

First, it could draw more attention to its films from consumers. Netflix is best known for its original series, and the last six years of telling long-form serial stories have produced excellent results for Netflix.

But about one-third of all Netflix viewing is films. Netflix can increase engagement and draw in more viewers if it becomes known for its original films on top of its series. And that's what will enable it to continue raising its prices.

Second, and perhaps more importantly, a Best Picture win will show writers, directors, actors, and other film talent that Netflix can win them an Oscar. Netflix has been slowly building up a roster of top Hollywood talent, and an Academy Award would cement its pitch.

That creates a virtuous cycle for Netflix in which it attracts attention from awards, which attracts new subscribers and talent, which generates more Oscar and Emmy buzz. Bigger-budget and more critically acclaimed films can help Netflix differentiate its service, especially as it starts competing more directly with other film studios in the direct-to-consumer streaming space later this year.

Spending $25 million, or whatever it cost to get Roma on the minds of Academy voters, was an investment for the long-term future of the company, not just one award.