Stocks managed significant gains for the third straight week last week, with both the S&P 500 and the Dow Jones Industrial Average gaining more than 1%. That added to a volatile, but overall strong start to 2019 for major U.S. indexes, which are up 6% to date. 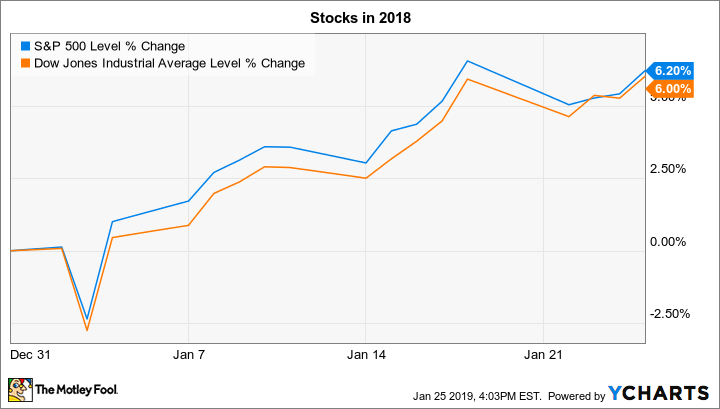 Hundreds of companies will post fourth-quarter earnings results over the next few days. That includes tech giants that have stumbled in recent months. Below, we'll take a look at the metrics that could send shares of Apple (AAPL 0.19%), Facebook (META 1.98%), and eBay (EBAY -0.62%) moving in the trading week ahead.

Apple stock has been hit hard in recent weeks following a rare guidance downgrade issued by the consumer tech giant in early January. CEO Tim Cook and his team warned investors that sales would only land at around $84 billion for the key holiday quarter -- below the forecast they issued in early November calling for revenue between $89 billion and $93 billion. Instead of rising slightly when fiscal first-quarter results are posted on Tuesday, sales are now on pace to decline, year over year.

Executives offered detailed explanations for the drivers of the shortfall, mainly blaming slowing economic growth in China. Apple has bigger problems, though, including a reticence on the part of consumers around the world to trade up to newer iPhones. The company believes innovative product releases will see it through this challenge over the long term, with more immediate help coming from reduced prices and a new phone trade-in program.

Apple has some formidable assets it can apply to the challenge, including over $130 billion of cash on the books and one of the world's most valuable brands. The question is whether these advantages will be enough to quickly return the company to sales growth.

Facebook will announce its results on Wednesday, and investors are bracing for some bad news out of the social media titan. According to CEO Mark Zuckerberg and his team, revenue growth is expected to decelerate for the second straight quarter, down to about a 26% increase from 33% last quarter and 42% in the fiscal second quarter.

Facebook's bigger problem is the steady drumbeat of negative press that appears to be taking a toll on user engagement. The intense media focus on its data sharing and privacy practices continued to rile users this past quarter.

It's likely that the company's response to these issues will require extra spending, which should further compress its profitability. Operating margin dropped to 42% of sales from 50% last quarter, in fact .

The larger issue is whether Facebook can convince users who have scaled back their time on the platform to return to sharing just as freely as before, without worrying about their data being misused. Look for Zuckerberg to spend some time explaining how the company aims to improve the service for these consumers.

eBay's online marketplace business is going through a painful transition that's likely to impact its fourth-quarter results that are set to be published on Tuesday. The company's recent marketing investments failed to deliver the desired boost in sales volume, and that miss prompted management to lower its full-year growth target to about 6% from the 7% to 9% increase it had initially predicted.

There are still many reasons to like this business, including a cash-rich operating model that's only getting more efficient as the company scales back on low-return marketing spending. Executives are targeting big boosts to operating income this year, after all. The company has a few significant growth avenues available, too, including its new payment processing niche and its third-party advertising offerings.

These emerging businesses should add around $3 billion of annual revenue to the company's sales footprint. We'll find out on Tuesday whether management thinks that will be enough to return eBay to an accelerating growth pace in fiscal 2019.