The e-commerce giant's plan to inundate the market with convenience stores is a potentially lucrative play.

Amazon.com's (AMZN 3.15%) cashierless Amazon Go convenience stores don't just replicate productivity rates typically achieved by elite retailers like Apple. When the full complement of 3,000 stores that the e-commerce giant is planning to flood the market with are up and running, they could be generating returns 50% greater than the typical convenience store.

Data from RBC Capital Markets suggests the average Amazon Go location can generate $1.5 million in sales annually versus convenience stores of a similar size, whch generate sales of about $1 million a year, according to the National Association of Convenience Stores. Extrapolate those figures to 2021, when all the Amazon Go stores are planned to be operational, and the company could be pulling in $4.5 billion a year in sales. 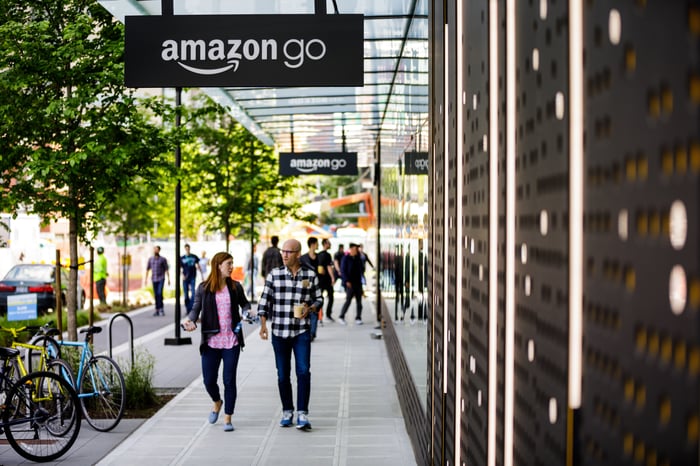 The sales won't come cheap, as the technology behind the original store was estimated to cost $1 million, which would bring the total tab to $3 billion if Amazon builds them all and costs stay flat. But they would be sunk costs for Amazon, and presumably they should decline over time from efficiencies realized from building out so many locations. In any case, Amazon has a huge opportunity on its hands.

RBC Capital Markets based its estimates on actual visits its analysts made to Amazon Go stores. They figured that based on the 400 to 700 customers a day they counted, who bought approximately $10 worth of goods per visit, the typical Amazon Go store would make between $1.1 million to $1.95 million per store per year. If Amazon builds all 3,000 stores as planned, that's some $4.5 billion a year at the midpoint of that range.

There are some caveats. Amazon hasn't decided on what the actual format of the stores will be. It's currently trying several different size stores ranging from 1,200 square feet to around twice that size. The eight stores in operation now also carry different items. Tech site Recode says some only offer sandwiches and salads while others sell beer and other packaged grocery items.

The ability to build 3,000 stores may also be thwarted by Luddite politicians who demand all stores accept cash. Massachusetts passed a law several years ago requiring stores in the state to accept cash, while the New Jersey Legislature recently introduced a bill requiring the same. The legislation does carve out some exceptions, including stores in airports -- some of the places Amazon is considering. That would suggest those locations would be dramatically smaller than the existing Go stores and would carry an even more limited inventory.

Also, Amazon's plan for 3,000 stores in two years is highly ambitious -- it would have to open around 1,500 stores a year, or four stores a day, every day.

There is also competition coming that could affect Amazon Go stores. 7-Eleven, for example, one of Amazon's primary targets, is testing a new mobile checkout process in 14 Dallas area stores. Called Scan & Pay, it lets customers scan an item's QR code with their smartphones and pay for it using the 7-Eleven rewards mobile app. It's not as effortless as Amazon Go, but it is another workable, less costly system that could be applied by other convenience store chains.

Amazon actually hitting $4.5 billion in annual sales from Amazon Go may simply be a case of analysts drawing a straight line far into the future. But it's also clear that the e-commerce giant has identified a problem in the retail experience -- the choke point of actually paying for goods -- and once again is at the forefront of changing how we think about shopping.

By removing this bottleneck and making the entire shopping experience less painful, Amazon.com is likely to be richly rewarded for its efforts no matter how many stores it actually builds.