An oversupply of graphics cards following the bursting of the cryptocurrency bubble led Advanced Micro Devices (NASDAQ:AMD) to provide not-so-great guidance for the fourth quarter. The company expects to grow revenue by just 8% year over year adjusted for a new accounting standard, despite rising sales of its CPU products.

AMD underestimated how badly its graphics business would be hurt by vanishing crypto-related demand in the third quarter. With rival NVIDIA (NASDAQ:NVDA) slashing its guidance on Monday, partly due to weak demand for its gaming GPUs, AMD's fourth-quarter results could miss the mark when the company reports after the market closes on Tuesday. 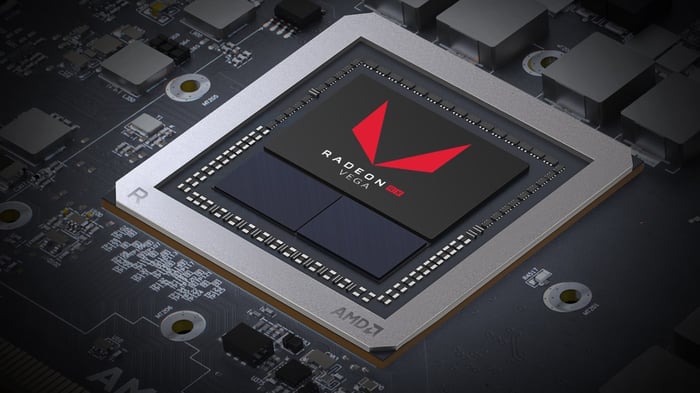 AMD's revenue growth slowed way down in the third quarter as demand for graphics cards fell off a cliff. Earnings grew at a much stronger rate, buoyed by a rising gross margin.

Sales of graphics cards that AMD attributes to cryptocurrency were negligible in the third quarter, down from a high single-digit percentage of revenue in the prior-year period. This led to lower graphics revenue overall. Strong sales of Ryzen PC CPUs offset that decline and allowed the company to post a small increase in total revenue.

Despite growth from AMD's EPYC server CPUs, sales in the enterprise, embedded, and semi-custom segment slumped 5% year over year. AMD provides semi-custom chips that power the PlayStation 4 and Xbox One game consoles, both of which are toward the tail end of their life cycles. Server chip growth was unable to fully offset slumping semi-custom sales.

AMD's earnings growth was powered by a rising gross margin. Non-GAAP gross margin jumped 4 percentage points year over year to 40%, driven by a shift toward new products like Ryzen and EPYC.

The average analyst estimate for AMD's fourth-quarter revenue is in-line with the company's guidance. This represents year-over-year growth if the prior-year numbers are adjusted for the ASC 606 revenue accounting standard, but a decline on a reported basis.

With NVIDIA warning about slumping demand for gaming graphics cards, AMD's graphics business may do even worse than the company is expecting. AMD is also banking on sales of data center GPUs to drive some of its fourth-quarter growth, but NVIDIA's guidance cut throws some cold water on those plans as well. NVIDIA cited a slowdown in data center demand driven by an uncertain economic environment as one reason for its tumbling sales, and that slowdown could hit AMD as well.

Weak data center demand could also hurt AMD's efforts to grow its server chip business. The company's market share is still small compared to market leader Intel, but that doesn't mean it's immune. Intel expects its data-centric revenue to decline in the first quarter, and AMD may have similar trouble.

AMD's fourth quarter ended about a month earlier than NVIDIA's, so its results may not be hit quite as hard by weak gaming demand and the data center slowdown. But the company's guidance for the first quarter has the potential to be downright awful. The average analyst estimate right now calls for a 10% year-over-year revenue decline in the first quarter. For a stock that has a lot of optimism priced in, that's bad news.