Falling iPhone sales seem to indicate that prices have risen too far. Will Netflix learn from Apple's lesson or fall into the same trap?

For the past several years, Apple (AAPL -2.63%) seemed invincible. Sure, there were ongoing concerns about slowing iPhone sales, but the company's revenue continued to grow, spurred on by a seemingly endless string of price increases for its flagship device.

That all came crashing down recently. A combination of increasing smartphone penetration, slowing growth in China, and lackluster adoption of the latest model caused Apple to warn that its revenue results for the important holiday quarter would fall well below its previous guidance.

There are some interesting parallels with Netflix (NFLX -1.53%) as it begins to more aggressively raise prices. Is the streaming giant rushing headlong into a similar fate? 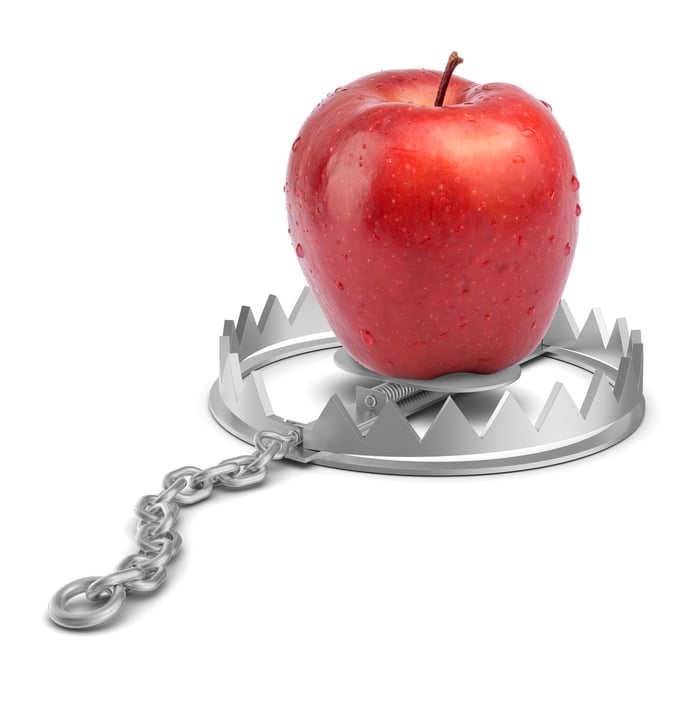 Over the years, Apple has often suggested that as it continued to add high-end features to its iPhone, consumers would be willing to pay a premium for the device. Here's what Apple CEO Tim Cook had to say on the subject on the third-quarter 2018 conference call last June:

If you look at iPhone X in particular, it's the most innovative smartphone on the market. We priced it at a level that represented the value of it. And we could not be happier that it has been the top-selling iPhone since the launch.

Netflix had been much more reluctant to raise prices since the ill-fated splitting of its DVD and streaming services back in 2011. Where customers were previously charged $10 for both services, the price jumped to $8 each or $16 for both. Customers revolted at the 60% price increase and Netflix lost 800,000 members that quarter, or 3% of its subscriber base. That led to a long period of stable pricing.

Over the past couple of years, however, Netflix has been much more willing to institute price increases. Consider this recent quote from Netflix's chief product officer, Greg Peters, on the company's fourth-quarter conference call, referring to the recent price increase:

"Our job is to effectively invest the money that our subscribers give us every month so that we can give them incredible content and a better and better product experience. And if we do that well, we create more value for our subscribers and then occasionally, we'll come to them and we'll ask for a little bit more money."

That sounds an awful lot like Apple's justification for higher prices.

While both companies have a history of recent increases, the results over time have been vastly different.

Since 2014, Netflix has raised the cost of its standard plan -- which includes high-definition streaming and concurrent streaming on two devices -- from $7.99 to $12.99, a 63% increase.

While that might seem ambitious, the path of price increases for the iPhone has been far more aggressive. In 2014, a low-end iPhone 6 cost about $199. Today, the cheapest iPhone XS comes in at $999 -- a fivefold increase.

Not Apples to apples

It's important to note that other factors are at play, so this is obviously not a perfect comparison. Smartphones have experienced much greater penetration worldwide than streaming has. In addition, the ongoing trade war and slowing economic growth in China probably took the greatest toll on Apple's results, so growth may rebound somewhat once Washington, D.C., and Beijing strike an accord.

While this isn't strictly an apples-to-apples comparison, it does illustrate the potential downside that comes from raising prices too far, too quickly. Even though Apple has gone to great lengths to defend its premium iPhone pricing, my colleague Evan Niu argues that "Apple is coping with slowing upgrades while also trying to maintain margins." The company's unending price increases might soon begin to cause even the Apple faithful to at least consider other options, or to hold on to their old phones for longer.

Customers haven't revolted against Netflix's cost increases -- at least not yet. It would be best if the company learns from Apple's mistakes and maintains the slower pace of its price increases, before it faces a backlash from its subscribers.