Please ensure Javascript is enabled for purposes of website accessibility
Log In Help Join The Motley Fool
Free Article Join Over 1 Million Premium Members And Get More In-Depth Stock Guidance and Research
By Jason Hall - Updated Apr 24, 2019 at 12:02AM

Nucor has never sold more steel or made more money. While the cycle can change quickly, management continues to focus on building a business for the long term.

By just about every measure, 2018 was a banner year for Nucor Corporation (NUE -1.73%). America's biggest steelmaker released its fourth-quarter and full-year financial and operating results on Jan. 29, reporting record shipments of steel, record revenue, and best-ever earnings, both measured by net income, and earnings per share. And it wasn't just a slightly better year than the prior record of $5.98 per share back in 2008; Nucor delivered a big 24% increase to $7.40.

Does that mean investors should be fearful that the steel market is approaching another peak? While there's no reliable way to predict whether economic demand for steel will continue to climb over the near term, Nucor's management fully expects 2019 to be another great year. 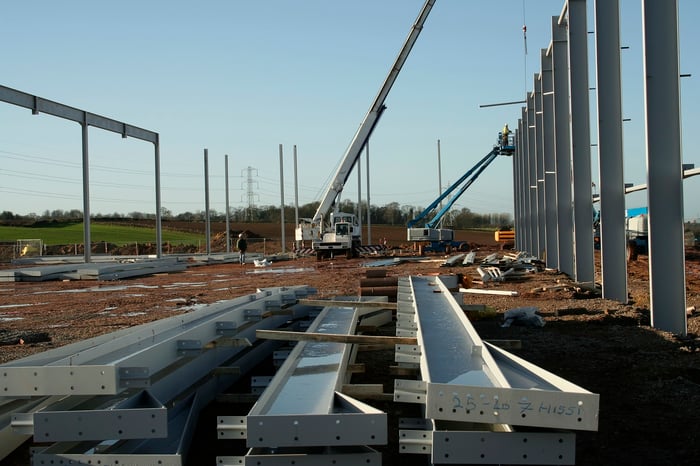 Whether that turns out to be the case or not, no steelmaker has proven a better investment through every part of the steel cycle. Let's take a closer look at Nucor's results, what management had to say, and some key takeaways for investors.

Nucor's big profit surge was the result of selling 5.3% more steel at 21% higher average selling prices. The higher steel volume improved Nucor's operating rate -- which measures what percentage of capacity its steel mills operate at -- to 91%. This combination of higher prices and increased operating leverage resulted in a 79% surge in profits year over year.

2017 was a relatively weak year for steel prices in the U.S., mainly due to a huge influx of imports, many of which the U.S. steel industry -- and the Trump administration -- view as being illegally subsidized by their country of origin. Early in 2018, the U.S. government implemented broad tariffs on a huge swath of steel imports, driving imported steel volume lower while also sending prices higher. Furthermore, despite concerns that tariffs would weaken demand because of higher prices, demand remained relatively strong throughout the year.

No steel company was better set to profit from the confluence of higher prices and volume than Nucor, generating a record $2.4 billion in operating cash flow, more than double the $1.1 billion in 2017.

Optimistic for a strong 2019

While management didn't offer specifics, the general expectation is that "2019 will be another strong year as we expect the earnings performance to be one of the best in Nucor's history." The guidance statement went on to say "...we have a positive outlook on end-use demand and general economic conditions."

The first quarter is expected to generate "much stronger" earnings than the first quarter of 2018, with results similar to the just-ended fourth quarter of last year. Some segments should generate better results, while lower sheet steel and iron prices reduce profits from others.

On the earnings call, management end-user demand for steel remains strong -- strong enough that the company was confident enough to recently raise prices on many products. If demand does remain strong in 2019, it could prove another banner year.

Management not making decisions based on 2019 alone

Much of Nucor's strong profits are the result of management's steady, disciplined hand at capital allocation. Over the past decade, the company has spent some $9 billion in a combination of internal growth projects and external acquisitions. Acquisitions during the steel industry's downturn over the past eight years have fueled a substantial amount of the company's growth. Management took advantage of Nucor's industry-leading financial solidity to acquire businesses that strengthened the company's competitive position at fire-sale prices.

Yet since the steel market has improved, those discounted deals aren't as readily available. Furthermore, many of the assets available for sale are inferior to Nucor's current operations and wouldn't improve the company. This has management shifting away from acquisitions and prioritizing internal expansion, where it can generate higher rates of return.

Nucor has significantly raised the stake on expansion projects. Late last year, the company was on track to spend about $2 billion on internal growth projects, but that number has increased to $3.5 billion by 2022 after it announced plans to build a $1.35 billion steel plate mill. The plant will be located in the Midwest, positioning Nucor in the center of the biggest plate steel-consuming geographic region in the country. As with many of its other investments, building or acquiring facilities located close to end customers creates two competitive advantages over competitors sited farther away: faster fulfillment and lower delivery costs.

Combined, the company's $3.5 billion in internal growth projects are expected to be fully operational by 2022 and to generate $600 million per year in incremental EBITDA (earnings before interest, taxes, depreciation and amortization).

Forging ahead with a proven strategy

2019 could turn out to be yet another record-breaking year for Nucor; end-user demand and economic strength seem to indicate that's a very real possibility. But as investors should understand fully, economic conditions can change quickly. There are certainly signs that global economic growth is slowing, and the ongoing trade dispute between the U.S. and China could cause growth to slow to a trickle or even bring it to a halt. If that happens, 2018 will end up being another "top" for Nucor and the steel cycle.

But Nucor's management continues to operate based on a disciplined approach to maximizing the company's profits while demand is high and prioritizing a strong balance sheet and capital management to build a stronger company for the long term. The steel market will go through its swings up and down, and it's likely that Nucor's management will continue to make sure the company is built for both good markets and bad.