Eagle Materials (EXP 1.97%) faced several headwinds in its fiscal third quarter, which negatively impacted results. Not only was it going up against a tough comparable period, as last year's fiscal third quarter benefited from the enactment of the Tax Cut and Jobs Act, but the diversified materials company faced weather issues and timing shifts in the most recent period. However, the company doesn't anticipate that those problems will persist, which is why it remains positive about what lies ahead over the coming year. 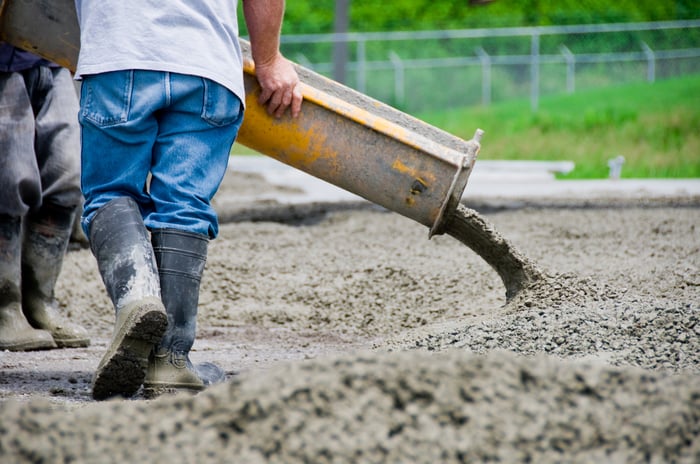 CEO Dave Powers commented on the company's results by saying:

Adjusting for the effects of unusual weather trends during calendar 2018 and a shift in the timing of wallboard price increases and related buying activity, we estimate that the overall market demand for our building materials, notably cement and wallboard, remained in positive territory in calendar 2018, with growth rates in the low single digits. Specific to this quarter's results, our wallboard business continued to perform very well with operating margins improving 440 bps (basis points). Cement prices and volume were up, but margins were affected by higher costs resulting primarily from maintenance outages at two facilities.

Eagle Materials encountered several issues during the quarter that impacted results. Heavy rain made it difficult for the company to move concrete and aggregates to customers, maintenance activities increased costs and reduced cement production, and customers didn't prebuy wallboard late in the year to lock in lower prices as they did in December of 2017. These issues clouded some notable positives, including the improvement in the profitability of the company's wallboard business as well as higher cement volumes and prices.

Powers noted that "the outlook for calendar 2019 continues to be positive as the basic underlying fundamentals of low unemployment, low interest rates, and higher wages remain favorable." Those factors should drive positive future results in the company's heavy and light materials businesses. However, Eagle's oil and gas proppants business will likely remain under pressure due to the steep drop in oil prices at the end of last year, which will likely impact drilling activity levels in the U.S., putting downward pressure on frack sand volumes and pricing.