The hot 812 Superfast continues to drive margin gains for the Prancing Horse.

Italian supercar maker Ferrari N.V. (RACE 0.07%) said on Jan. 31 that its adjusted earnings before interest, tax, depreciation, and amortization (adjusted EBITDA) rose 7.5% in 2018, to 1.11 billion euros ($1.28 billion), on a 10% increase in sales and a strong result for its most profitable models.

The result was in line with analysts' expectations.

For the fourth quarter of 2018, Ferrari's adjusted EBITDA was 274 million euros, up 6% from the year-ago period. 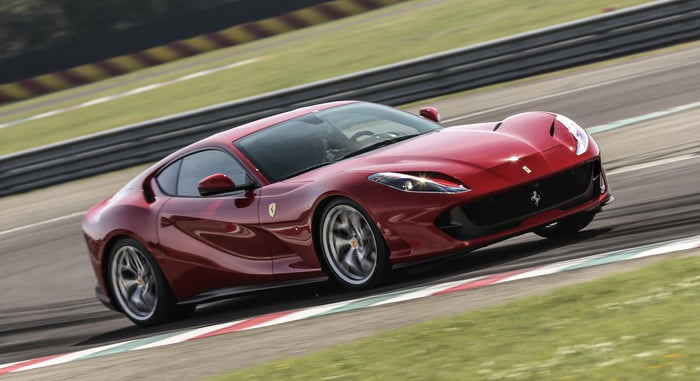 The thing to remember is that 12-cylinder Ferraris are higher-priced and more profitable than their 8-cylinder counterparts.

The story in 2018 is that sales were strong around the world, and the mix of sales shifted somewhat toward 12-cylinder models. Overall shipments were up 10.2%; 12-cylinder sales rose 19.6%, while 8-cylinder sales rose 7.3%. Demand for Ferrari's 12-cylinder 812 Superfast continued to be very strong, and early sales of the new V8-powered Portofino convertible, introduced in the first quarter of 2018, were robust.

In addition to sales of its road cars, Ferrari also generates revenue from the sale of engines to its former sister brand, Maserati, as well as from payments by sponsors of its Formula 1 racing team. Overall results were mixed: The gains in revenue from improved road-car sales, and from higher payments by race-team sponsors, were nearly offset by a significant decline in sales of engines to Maserati, and by unfavorable exchange-rate effects. 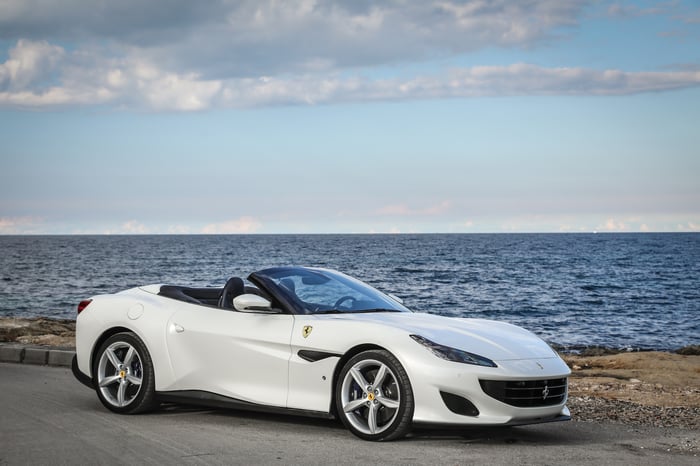 The V8-powered Portfolio was designed to attract new customers to Ferrari. It has done well since its introduction in the spring of 2018. Image source: Ferrari N.V.

In addition to the 2019 guidance, CEO Louis Camilleri confirmed the three "mid-term" goals for Ferrari's finances that he outlined at the company's Capital Markets Day last September. By 2022, Ferrari still expects adjusted EBITDA of 2 billion euros and industrial free cash flow of 1.2 billion euros by 2022, and that its net industrial debt will hit zero no later than 2021.