Stocks mostly advanced Thursday as the market digested earnings reports. The Dow Jones Industrial Average (DJINDICES:^DJI) was essentially flat while the S&P 500 (SNPINDEX:^GSPC) had a stronger showing, with the biggest gains made by the communication services sector. Utilities also rose on a drop in long-term interest rates.

As for individual stocks, Facebook (NASDAQ:FB) made a big move up when fears of a slowing user growth rate were dispelled, and Tesla (NASDAQ:TSLA) reported a profit. 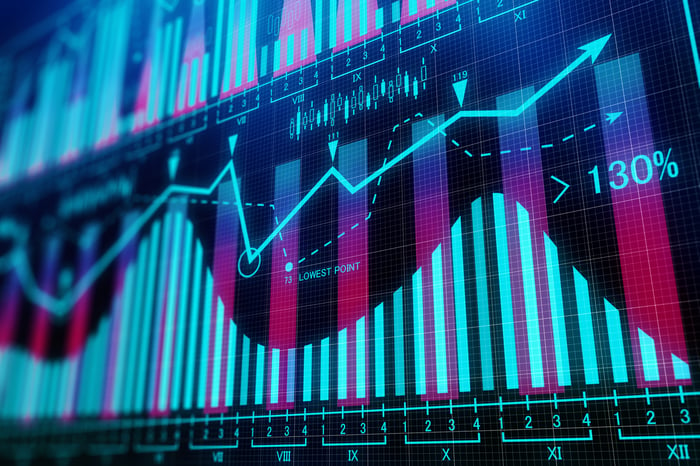 Coming into Facebook's fourth-quarter report, investors were worried that the social media giant was losing users due to a variety of scandals and privacy concerns, but the company reported strong user growth and beat expectations for both the top and bottom lines. Shares soared 10.8%.

Daily active users (DAUs) grew 9% to 1.52 billion in December and monthly active users also jumped 9% to 2.32 billion, or 31% of the world's population. Facebook also reported the first increase in DAUs in the U.S. and Canada in three quarters, to a record 186 million.

Facebook has been investing heavily in addressing social issues and improving privacy, growing expenses by 62% and head count by 42%. CEO Mark Zuckerberg said in the conference call that the company will continue these efforts as its first priority, but this year also will be allocating more energy to "building new and inspiring ways to help people connect and build community."

Tesla beat revenue expectations for its fourth quarter but missed profit estimates, and shares slipped 0.6%. Revenue grew 120% to $7.23 billion, topping the analyst consensus of $7.07 billion. The company reported a profit for the second straight quarter, earning $0.78 per share, compared to the $2.19 Wall Street was expecting. Tesla generated $910 million in free cash flow in Q4, up from $881 million in Q3.

Looking forward, the company expects to produce Model 3s at a rate of 7,000 units per week by the end of the year and annualized output "in excess of 500,000 units sometime between Q4 of 2019 and Q2 of 2020." This year will also mark the start of tooling for the Model Y, with volume production by the end of 2020.