The homebuilder's shift to entry-level housing appears to be paying off in a sizable way.

If your only source of information was a stock price chart, it would be easy to assume that 2018 was a bad year for homebuilder Meritage Homes (MTH -2.68%), with its stock price finishing the year down 28% and spending most of the year headed south.

In a sad stock market irony, this is about as far from the truth as it gets: 2018 was a banner year for Meritage in just about every aspect. It sold 11% more homes than the year before (and at higher margins), grew earnings per share by 64%, substantially increased cash flow, improved its balance sheet, and repurchased several million shares of its stock.

All while shifting its business strategy to the segment of the housing market where most of the demand will be in the coming decade. 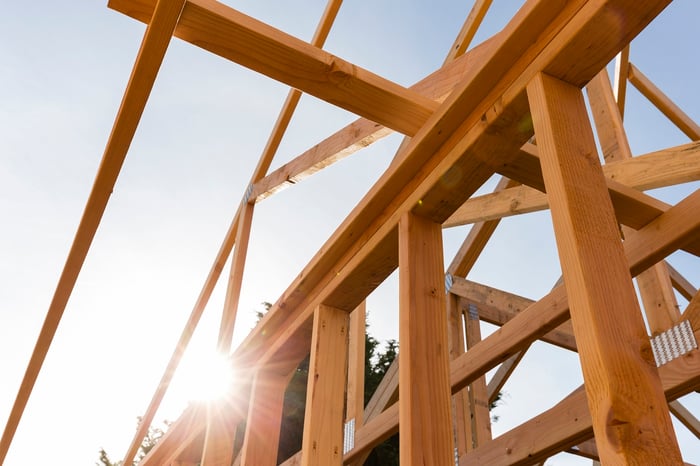 The move to entry level is paying off

To sum up 2018 and the fourth quarter for Meritage Homes, the shift to build more starter homes is really paying off.

Home-closing revenue increased 8% in the quarter and 9% for the year, while the company closed on 11% more units in both the quarter and the year than the year-before periods.

Here's where it gets really interesting: Despite commanding lower prices -- Meritage reported a 3% decline in the average price of a home it closed on in the quarter and a 1% drop for the year -- those homes were more profitable. Home-closing gross margin was 19% in the fourth quarter, up from 18.2% the year before and the highest mark since 2015. For the year, gross margin was 18.2%, up from 17.6% in 2017.

The combination of more units and higher margins resulted in a nice bump in profitability. For the full year, gross profit on homes increased 12% -- significantly better than the 9% revenue growth -- while pre-tax earnings increased 14%.

A note on the big surge in earnings

On the bottom line, GAAP net income surged 112% in the quarter and 59% for the year, but it's worth noting that this was partly due to some changes that won't recur. When the federal government enacted the tax bill in late 2017 that dropped corporate tax rates, a lot of companies were forced to take a paper loss on the revaluation of deferred tax assets. In Meritage's case, this resulted in a $19.7 million charge against its earnings in the year-ago quarter.

A couple of things to remember: First, because this was a one-off adjustment, and the long-term benefit of a lower tax rate will more than offset it, Meritage's pre-tax profits offer a little better picture of its earnings growth over the year and the quarter.

Second, there's no doubt the lower tax rate will continue to benefit the company; Meritage's provision for income tax fell by 46%, more than $48 million for the full year. For context, that's enough money to cover more than an entire quarter of the company's general & administrative expenses.

Looking ahead: Keep expectations in check

To be fair, there is indeed some concern with the housing market. Meritage's home orders declined by 15% in the fourth quarter, and the backlog ended 2018 with 15% fewer homes on order. This was partly due to a very strong surge in orders at the end of 2017 after hurricanes affected demand for housing in Florida and Houston. But there was also the very real impact of some customers canceling orders in some markets this year due to caution about interest rates and economic conditions.

However, some of the reduction in home orders is also a product of the shift to entry-level homes. The company said 41% of home orders for the year were entry level, a 25% increase, and 56% of its closings in the fourth quarter were speculative sales versus orders from prior periods. One of the realities of shifting to more entry-level homes is that more of these are sold on spec, which could hurt the order backlog. Since these homes aren't custom-built, there's simply less demand to order before construction starts.

CEO Steven Hilton said that the company would not give guidance for the full year until the end of the first quarter, "... after we assess market conditions with the benefit of the spring selling season." But the company did cite expectations of 1,500 to 1,625 new home closings in the first quarter, or 9.4% fewer than it closed in the first quarter of 2018. This is largely due to the 15% reduction in the beginning backlog as discussed above, but also because home sales have slowed over the past couple of quarters. Furthermore, gross margin is expected to fall between 50 and 75 basis points, as the company plans to increase sales incentives to attract more customers.

Put it all together, and Meritage Homes may not have quite as productive a year in 2019 as it did last year. But improvements in the profitability of the homes it builds, along with another year of lower tax rates, should keep it solidly profitable. No matter how 2019 plays out, management has positioned the company in the sweet spot of housing demand for the next decade or more.