Please ensure Javascript is enabled for purposes of website accessibility
Log In Help Join The Motley Fool
Free Article Join Over 1 Million Premium Members And Get More In-Depth Stock Guidance and Research
By Natalie Walters - Updated Apr 10, 2019 at 8:46AM

Apple's iPhone business is slowing down.

Just a few years ago, Apple's (AAPL 2.45%) iPhone launch events were so popular that people were sleeping outside the stores to ensure they got their hands on one of the new models the day they came out. If you didn't, you might have to wait a month until they were restocked.

But the era of camping outside Apple stores may be over. This year, Apple's three new iPhone models launched without much fanfare and to lackluster demand.

For the past quarter, iPhone revenue fell 15% year over year. While the iPhone business used to be central to Apple's revenue growth, this year it weighed on the company. Apple said its total quarterly revenue declined 5% year over year to $84.3 billion. 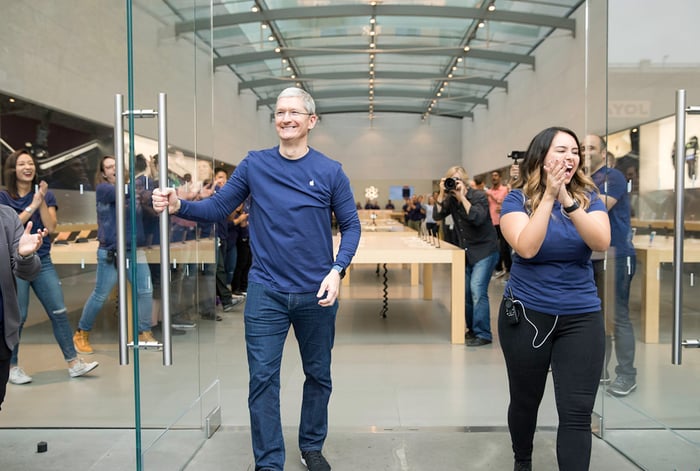 Reminiscing on the golden years of the iPhone launches

Apple's iPhone became a lucrative overnight phenomenon the day the original model launched on June 29, 2007. The company even had to make a rule limiting customers to two devices per person.

On that first day of sales, the atmosphere at the crowded Apple store in New York City's SoHo neighborhood was like a rock concert, CNN reported. In fact, the intersection around that store had to be shut down due to the number of people trying to get a peek at the first-generation iPhone.

The hype around iPhone launches kept this same level of enthusiasm into 2014, when Apple announced that it sold over 4 million iPhone 6 and iPhone 6 Plus phones within the first 24 hours after pre-orders began. Apple had to warn customers that demand for the new iPhone models had already exceeded its initial pre-order supply.

You might have noticed that it has become a lot easier to get your hands on new iPhone models the day they launch. While Apple still had a few loyal customers line up outside its stores this past September, the lines were noticeably shorter compared to past years.

In fact, last quarter, Apple overestimated how many customers would be interested in upgrading to one of its three new iPhone models. Hence, the downward revision in its revenue guidance in early January and the drop in iPhone and overall revenue for the quarter.

If you were watching closely, there were signs of iPhone sales weakness even a year ago when Apple sold nearly a million fewer iPhones than it had in the same period a year earlier. The company tried to brush over this fact by reminding investors that it had still hit a new record for quarterly iPhone revenue thanks to the higher average selling price (ASP) of its newer models.

If you need more proof that the golden age of iPhone sales might be over, consider the fact that Apple isn't reporting iPhone unit sales anymore. If a company were proud of its sales results and thought they would excite investors, wouldn't it be eager to report them?

Why are iPhones not a hot item anymore?

It's not necessarily Apple's fault that iPhone launches have lost some of their excitement. The overall smartphone market has matured. For 10 years, the company was able to offer big enough changes in the new models to warrant a considerable upgrade cycle. But that couldn't last forever.

Since the launch of the iPhone 7 Plus in late 2016 with portrait mode capabilities, you'd have to be a techie to notice any big differences in the new models. But you don't have to be a techie to notice the big difference in prices. In two years, the latest iPhone model's starting price jumped from $649 for the iPhone 7 in 2016 to $749 for the iPhone XR in 2018. And if you wanted the new iPhone Xs Max, you'd have to pay a minimum of $1,099.

The phones are simply not good enough to warrant an expensive upgrade for most people. And it's no longer exciting or special to have the latest model when it's basically the same phone that's been out for the past few years.

If you want to look on the bright side, this past quarter Apple reached 1.4 billion active devices worldwide. That's a lot of loyal iPhone, Mac, iPad, and Apple Watch customers. In other words, people still love their iPhones; they simply don't need to upgrade them every one to two years anymore. And that's why Apple is eager to find other ways to boost its revenue.