The industrial automation company sounded a mostly optimistic note about its 2019 prospects, but if its customers hit a rough patch, its sales will too.

Given the disappointing outlooks issued recently by industrial companies such as Stanley Black & Decker (SWK 0.51%) and Caterpillar (CAT 1.76%), it's understandable that the market was a bit nervous about the prospects for Rockwell Automation (ROK 2.97%) in 2019. After all, the company's revenue is tied directly to its customers' capital spending -- and that's something businesses are sure to cut back on during an economic downturn.

No matter, Rockwell delivered a good set of first-quarter earnings, and maintained its full-year guidance. But will that be enough to push the stock higher? Let's take a closer look.

What the market is afraid of

You can see the cyclical nature of Rockwell's sales in the chart below. The company got hit hard by a downturn in U.S. industrial production in 2015 and 2016, but growth bounced back nicely in 2017. With this in mind, when a company like Stanley Black & Decker starts talking about a slowdown in spending in interest rate-sensitive sectors such as housing and automotive, and Caterpillar talks down growth prospects in China, it's natural that investors would start to become concerned about Rockwell Automation.

Then factor in the cautious views Emerson Electric (EMR 2.81%) CEO David Farr expressed in November about growth in both China and Europe.  (Emerson is a peer, and tried to take over Rockwell in 2017.)

On the other hand, Rockwell CEO Blake Moret gave a relatively positive outlook for 2019 during his investor day presentation in mid-November -- which suggests that a certain amount of optimism was baked into the company's 2019 guidance for organic sales growth in the 3.7% to 6.7% range.

Whenever a CEO gives an outlook which is relatively more positive than what's its rivals and peers are saying, it raises concerns that the internal assumptions used to create guidance are overly optimistic and management may need to take them down in the future. 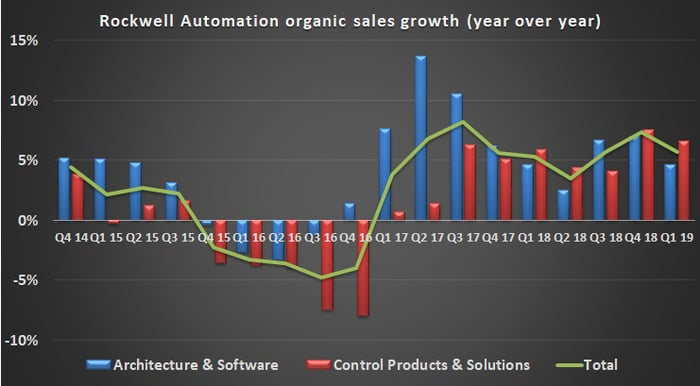 Fast-forward to the first-quarter earnings report and presentations. As you can see in the chart above, the company reported organic sales growth of 5.7%, which encouraged Moret to maintain full-year guidance for:

To put this guidance into context, it means Rockwell trades on a forward P/E ratio of 18.9 -- which looks a good value for a company with strong long-term secular growth prospects from the internet of things.

All of this leads to the question of what exactly was baked into Rockwell's guidance for 2019. Indeed, analysts spent most of their time on the earnings call inquiring into the matter.

Puts and takes from the guidance

In a nutshell, Moret acknowledged the ongoing "uncertainty due to trade tensions and geopolitical risks. However," he said, "forecasts continue to call for industrial production growth. We had a good first quarter and project quoting activity was strong."

He maintained that Rockwell's Q1 results put it on track to hit its existing earnings guidance. As you can see below, strong performance in North America -- by far Rockwell's most important end market -- helped offset weaknesses in Europe, and in China's automotive sector.

Moret acknowledged that the company was no longer predicting that its sales to the automotive industry would hold steady in 2019. The new forecast is for a decline in the mid-single digit percentages. However, he expects that decline will be offset by gains elsewhere. "So versus our ... November guidance, Automotive [is] now expected to be down mid-single digits for the full year. Heavy industry, a little bit better, and then also strong consumer, particularly life sciences, and after that, food and beverage," Moret said.

In China, Moret foresees mid-single-digit percentage revenue growth for Rockwell in 2019, and he reminded investors that Rockwell has exposure to the life sciences, oil and gas, and food and beverage industries, all of which he expects growth from in 2019.

It was a respectable quarterly report under the circumstances, and Rockwell's stock still appears to be a good value. However, that assessment will change if there's a protracted slowdown in the economy, and particularly if the commodities sector takes a hit. If capital spending on oil and gas projects and mining operations slows, it could hurt Rockwell just as similar conditions did in 2016.

That said, the U.S. economy continues to grow, and the company's guidance doesn't look overly optimistic. On balance, investors should give Rockwell the benefit of the doubt regarding its guidance, and on that basis -- and despite the share price's double-digit percentage gain already this year -- there is still value left in the stock.