Exchange operator and market services provider Nasdaq (NASDAQ:NDAQ) reported results for the final quarter of 2018 on Jan. 30. Alongside earnings, NASDAQ also announced its intention to compete with rival Euronext NV for Nordic stock exchange Oslo Børs VPS. Below, let's review key points from the quarter and examine Nasdaq's bid for Norway's only independent exchange. (Note that in the discussion that follows, all comparable numbers refer to the prior-year quarter, the fourth quarter of 2017.)

Data source: Nasdaq. N/A = Not applicable; difference too great to be meaningful. 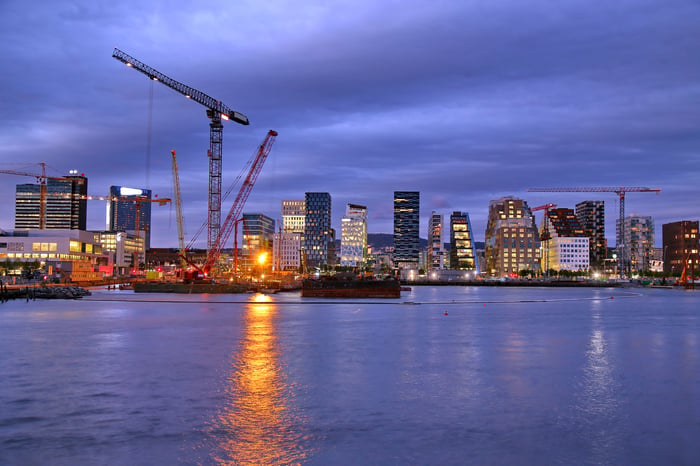 Nasdaq continues to view acquired growth as a critical component of its earnings expansion strategy. Last month, the company completed its $190 million purchase of Cinnober, a Swedish provider of financial technology to brokers and exchanges. In December, Nasdaq acquired alternative data specialist Quandl for an undisclosed amount.

On Jan. 30, alongside its earnings release, Nasdaq announced a bid to acquire Norway's primary stock exchange, Oslo Børs VPS, following an offer from rival Euronext NV to acquire the exchange. Nasdaq's formal offer, published Feb. 4, is priced at 152 Norwegian kroner per share, which represents a premium of roughly 5% over Euronext's 145 kroner offer.

As of this writing, Euronext has already stated its intention to sweeten its initial offer. While acquiring the primary bourse in the richest country in the Nordic region would benefit either company, Nasdaq clearly has a higher strategic imperative, as it already dominates the Nordic trading landscape and owns the exchanges in Iceland, Denmark, Sweden, and Finland.

Nasdaq's annual earnings guidance typically consists simply of a range of expected non-GAAP (generally accepted accounting principles) expenses for the year. For 2019, management projects that non-GAAP expenses will land between $1.325 and $1.375 billion, inclusive of the Cinnober and Quandl acquisitions. Of course, if the company succeeds in wresting the Oslo Børs transaction from the hands of Euronext, this range will be subject to revision in the first or second quarter.