Please ensure Javascript is enabled for purposes of website accessibility
Log In Help Join The Motley Fool
Free Article Join Over 1 Million Premium Members And Get More In-Depth Stock Guidance and Research
By Keith Speights – Updated Apr 18, 2019 at 11:17AM

But does beating the iPhone giant on one front actually make Aurora a smarter pick for investors right now?

Aurora Cannabis (ACB -2.40%) is something of a giant among marijuana stocks. It ranks among the top three largest marijuana stocks by market cap. Aurora claims the largest production capacity in the cannabis industry. The company's global reach is greater than that of most of its rivals.

Compared to Apple (AAPL -3.00%), though, Aurora Cannabis is more like a flea than a giant. Apple's market cap is more than 100 times greater than Aurora's. The technology leader made enough in profit last quarter to buy two companies the size of Aurora Cannabis and still have nearly $5 billion left over. 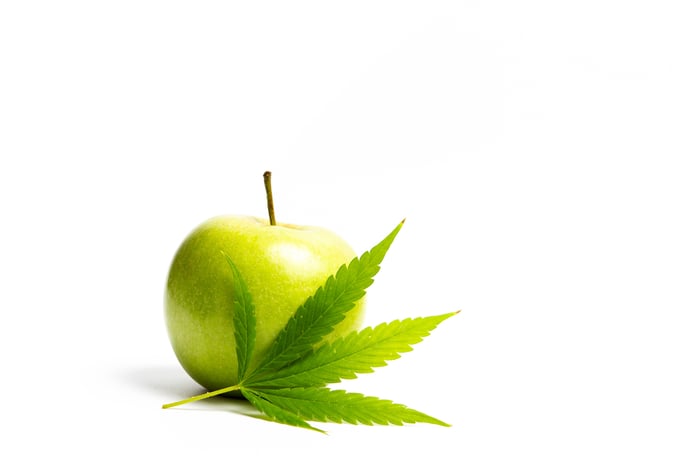 Robinhood came out of nowhere in 2013 to become one of the most heavily used online trading platforms. The differentiator for Robinhood is that it doesn't charge commissions on stock trades. Robinhood's free trading has especially appealed to millennial investors.

Markets Insider has been closely tracking the data from trading on the Robinhood app. Until Nov. 8, 2018, one stock stood above all others in popularity among the young investors that used Robinhood. That stock was Apple.

But Apple no longer holds the top spot on Robinhood. It's now in second place in terms of ownership. Which stock is No. 1? You guessed it -- Aurora Cannabis.

It's not shocking that Apple was dethroned. But for a Canadian marijuana stock to soar to No. 1 among Robinhood users is pretty surprising. Why do millennial investors appear to like Aurora Cannabis so much?

One factor to consider is that millennials support marijuana legalization more than any other age demographic. Americans support the legalization of pot more than ever before, with Gallup finding that 66% of all U.S. adults surveyed were in favor of legalizing marijuana. But the level of support jumped to 78% among respondents between the ages of 18 and 34.

Of course, greater support for marijuana legalization wouldn't automatically translate to millennials pouring their money into Aurora Cannabis. However, investors of any age like tremendous growth prospects -- and the cannabis industry certainly appears to have such prospects.

But why did Aurora Cannabis and not one of a long list of other hot marijuana stocks beat out Apple? Aurora benefited from a couple of developments in the last few months of 2018 that increased its exposure among investors likely to use Robinhood.

One was the rumor that circulated in September that Coca-Cola could be interested in making a deal with Aurora Cannabis. No such deal materialized, but the stories generated a lot of interest in Aurora. Another development was that Aurora began trading on the New York Stock Exchange in October 2018, making the stock more readily available to U.S. investors.

There's also the possibility that Aurora's lack of a partnership with a big company outside of the cannabis industry could be working in its favor. Millennial investors could think that a deal is bound to happen sooner or later and will provide a big boost for Aurora's share price.

In addition, Robinhood users could want to invest in the marijuana boom and simply chose Aurora through a process of elimination. Among the top four Canadian marijuana producers, Canopy Growth already claims a huge market cap. Tilray faces the possibility that insiders could flood the market by selling their shares at some point in the not-too-distant future. Aphria faces short-seller allegations that it drastically overpaid for Latin American acquisitions in a deal that lined the pockets of top executives. That leaves Aurora.

With more investors on Robinhood placing their bets on Aurora Cannabis than on Apple, does that mean the marijuana grower is a better stock than the iPhone giant? Not really.

Apple still checks off a lot of the boxes for investors that Aurora doesn't. It's highly profitable. Apple's cash stockpile is massive. The company pays a dividend. And there's that minor little detail that Apple's products are already legal throughout the world.

However, Aurora Cannabis has one major thing going for it that Apple probably doesn't. The global legal marijuana market could easily increase by tenfold or more over the next 15 years. Apple's market isn't likely to expand nearly that much.

Millennial investors on Robinhood appear to be looking to a future in which marijuana is a much bigger industry than it is today. It's certainly debatable whether Aurora Cannabis is the best stock to buy to profit from the cannabis industry's growth. But Apple definitely isn't the best stock for that objective.