Think the U.S. dominates the artificial intelligence sector? Baidu, Alibaba, and Tencent want to change that.

Artificial intelligence is on the cusp of transforming everything from transportation to healthcare, and by 2030, it will add an estimated $15.7 trillion to the global GDP. Lots of U.S. tech companies are riding the AI wave, and a few of them, including Alphabet, Amazon, and Microsoft, are top AI investments.

But it's not just U.S.-based companies investors should be looking at. China aims to be the premier country for AI research and services by 2030, and plenty of tech companies in the country are already on par with their AI rivals in the U.S. -- and in some cases, outpacing them. 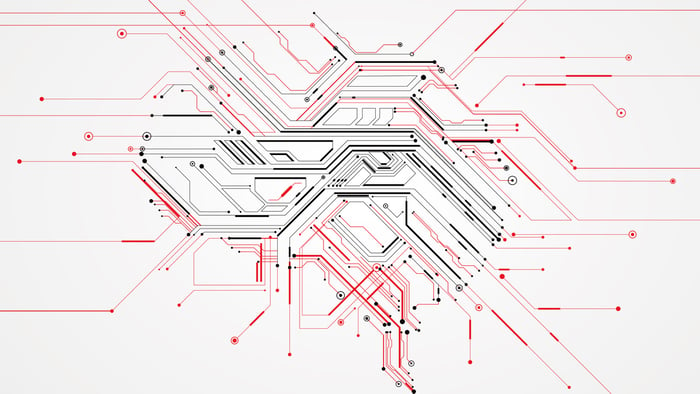 Baidu is driving the future of AI

There's likely no bigger way to play China's AI boom than by investing in Baidu. The company made a big move into the sector in 2014 when it hired away one of Google's top AI engineers at the time, Andrew Ng, who started the Google Brain project. Fast-forward to today and Baidu has more than 2,000 employees working on AI, and has rapidly expanded its AI pursuits.

Baidu uses AI in plenty of its services, including online search, but one of its most significant opportunities comes from its open-source driverless car project, called Apollo. The company wants Apollo to become the go-to platform for autonomous vehicles. The company aims to bring autonomous vehicles to market in China beginning in 2021, and has done extensive vehicle tests in both the U.S and China for years.

In the most recent quarter, Baidu's sales rose nearly 27% to RMB 28.2 billion ($4.18 billion), and non-GAAP net income jumped 47% annually to RMB 6.7 billion ($993 million). Like many tech stocks, Baidu's shares have taken a hit recently, and are down about 10% over the past three months. But with China being the largest automotive market and the Chinese driverless car market expected to reach $500 billion by 2030, investors shouldn't ignore the future upside of this leading Chinese AI player.

One of the essential elements of artificial intelligence is data. Without it, the best software and algorithms would be virtually useless. In the U.S., Google is the king of data, as it gathers tons of information about its users through its free services. In China, Tencent rules the data collection game.

Tencent's biggest service is its WeChat app, which has more than 1 billion active users, most of whom are in China. You could call it a social media app, but really it's a gateway for millions of users to the internet; it's a place where Chinese users pay their bills, share social media posts, summon ride-sharing services, play video games, and much more.

One of the most significant ways the company is using all of this data for AI is furthering its healthcare ambitions. The company launched an AI-based platform called Miying back in 2017 that allows healthcare institutions to use AI to diagnose cancer. Tencent's AI also enables hospitals to analyze and manage health records. With more than 38,000 medical institutions in China already using the WeChat app, the company is using its treasure trove of data to transform the medical industry in the country.

In the most recent quarter, Tencent's sales jumped nearly 24% to RMB 80.6 billion ($11.95 billion), and earnings per share popped 29% to 2.44 yuan. The company's shares are up about 19% over the past three months, and as AI expands in China, companies will be flocking to Tencent for its data.

Alibaba is best known for its dominance in the e-commerce market in China, but the company is increasingly becoming a big player in the artificial intelligence space as well. Just a few months ago it announced that it's developing its own AI chip, which will be available later this year.

The chip will be used in smart cities and autonomous vehicles, and will add to the company's current smart city management projects. Alibaba also has its own AI-powered robot for the hospitality industry, and has developed an AI customer service agent for its logistics company, Cainiao. This laundry-list of AI pursuits means that Alibaba has a huge opportunity to benefit from China's growing AI market in the coming years.

In the most recent quarter, Alibaba's revenue increased 41% from the year-ago quarter to RMB 117.28 billion ($17.4 billion), and sales from the company's core e-commerce business jumped 40% to RMB 102.84 billion ($15.25 billion). These quarterly results, released at the end of January, have helped push the company's stock price up about 15% over the past three months.

Investors need to remember that this company is already a dominant tech player in China, and it's in the early stages of becoming an AI powerhouse. As China's government continues to focus its attention on making artificial intelligence a key part of its future, expect Alibaba's AI ambitions to grow along with it.

Like any stock investment, these Chinese stocks come with their own set of risks. There's a lot of trade war talk between the U.S. and China right now, which could spook some investors from buying stocks of China-based companies. Additionally, some Chinese tech companies, most recently Huawei, have been accused by the U.S. government of stealing trade secrets. So thoroughly research any potential investment. Finally, know that, as these companies grow in AI dominance, they could experience some volatility.

Nasdaq Bear Market: 3 Phenomenal Bargains That Can Double Your Money by 2027
410%