Don't get overwhelmed by all of the AI investment opportunities. Investors looking for exposure to this burgeoning technology can get all they need from these four companies.

Artificial intelligence is an extremely broad and deep field -- the applications are so numerous, and the tools so varied, that it can be tough to wrap one’s arms around, let alone figure out which companies will benefit the most from it. And the average retail investor may not have the time or inclination to dive into the minutia of algorithms, machine learning, deep learning, computer vision, and inference. Yet the rapidly growing AI market will create an estimated $3.9 trillion in business value by 2022, so it's not a space that smart tech investors can ignore.

The good news is that many of the technology companies doing big things in AI are already household names, and you don't need a computer science degree to grasp the basics of how they're using artificial intelligence to improve their businesses. 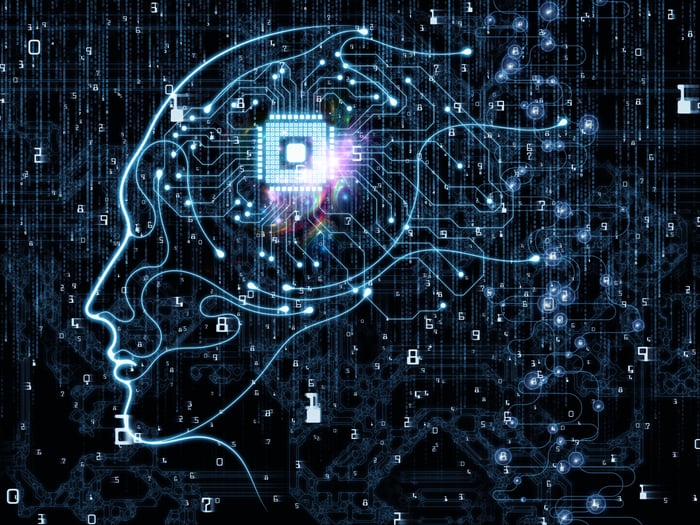 This chipmaker is powering AI servers

One of the most significant opportunities in AI is to use the technology to  speed up the rate at which servers process different kinds of information and solve complex problems. For example, graphics processing units (GPUs) -- similar to the chips used to handle video game displays -- can also help AI servers process visual information more efficiently. That's useful across an enormous range of computing tasks -- from allowing an autonomous car to "see" what's happening around it to scanning the image of your family that you just uploaded to Facebook, and suggesting names of people whom you might want to tag in it.

To help handle that second problem, the social media giant uses graphics chips made by NVIDIA -- and for various reasons, so do most other major tech companies, including Amazon, Microsoft and Alphabet. NVIDIA's graphics processors are in a league of their own when it comes to processing visual information, which gives it an edge over its rivals in the AI space. And the demand for such GPUs is growing rapidly: In the data center server market alone, the company's management thinks its total addressable market will hit is $50 billion by 2023.

NVIDIA's chips sit at the heart of many other types of AI systems as well, including (as mentioned above) in autonomous vehicles. Already, 370 companies are using its AI driverless car platform, called Drive PX Pegasus, and the company believes its autonomous driving market opportunity will be $60 billion by 2035. In short, if you're looking for an AI investment in the chip space, NVIDIA may be one of the best bets you can make.

Microsoft CEO Satya Nadella once called AI the "defining technology of our times," and his company has made a number of serious moves in its effort to be among those helping to define it.

For instance, Microsoft established its own Artificial Intelligence Research Group in 2016; it now has 8,000 engineers and computer scientists working on AI projects for its Office products, its Cortana virtual assistant, and its Azure cloud computing platform, among others. And earlier this year, Nadella restructured Microsoft to focus more attention on artificial intelligence.

The overall cloud computing market will be worth an estimated $302 billion by 2022, and Microsoft's opportunities within it are massive. In the first quarter of its fiscal 2019, Azure revenue jumped 76%. As demand for AI services grows, Microsoft should be able take further advantage.

Driving the future of AI

Alphabet uses AI widely -- in its Google Cloud Services, its Google Translate app, its Search tool, and even its advertising business.

But one of its most ambitious artificial-intelligence powered efforts is its self-driving vehicle subsidiary, Waymo. What started as a "moonshot" side project has now become full-fledged company that's about to launch its own commercial autonomous ride-hailing service.

Waymo vehicles use high-powered AI computers to process image information as they drive. The brains of these computers not only process what's happening around them in real time, but they also learn from their experiences to become better drivers, and share that data across the fleet. Waymo's vehicles have logged 10 million miles on real roads, as well as more than 7 billion virtual miles in computer simulations, en route to creating one of the most advanced autonomous vehicle systems in the world.

Driverless cars aren't just a fun project for Alphabet; the company is dead serious about making money from Waymo. An Early Rider program underway in Phoenix, Arizona, allows members of the public to use its service for free, but Waymo says it will be launching a commercial version by the end of this year.

Analysts at Morgan Stanley think Waymo could be worth $70 billion by 2030, and suggest it could eventually be worth $175 billion if you add up its opportunities from the ridesharing service, an autonomous logistics business, and from licensing its technology to automakers.

Using AI for nearly every aspect of its business

Last, but certainly not least, Amazon has several major opportunities to benefit from AI, and its already using the technology to improve many of its businesses. For example, AI helps it recommend products you might like, impacts how offerings are ranked in search results, what deals it offers, and helps the company reduce fraud.

AI -- and in particular, a sub-field of AI called machine learning -- are so important to Amazon that CEO Jeff Bezos highlighted them in his 2017 shareholder letter, noting:

One key way that Amazon is already benefiting from AI is through the Alexa virtual assistant in its Echo speakers. Echo owners can use the devices to play music, get answers to a broad range of questions, play games, or find out about the weather, but most importantly for the company, they can easily buy products from Amazon with just a few voice commands.

That might not seem like a big deal, but people who own Echo devices spend $400 more annually on the e-commerce site than the average Amazon Prime member, and buy eight more products each year than the average Amazon customer. The company could tack an additional $10 billion onto its top line annually by 2020 thanks to the devices, according to some estimates, and it's just a few years into its AI push.

If you need any more evidence of how central artificial intelligence has  become in the tech universe, consider that a 2017 report from PwC forecast that AI could add nearly $15.7 trillion to the global GDP by 2030.

The companies above are already integrating AI into their businesses, and some are already reaping benefits on the top line. Investors looking for easy ways to tap into the growth potential of this technology -- without being overexposed -- should consider what NVIDIA, Microsoft, Alphabet, and Amazon are doing. And after the dip the overall tech sector took during the past several weeks, these AI stocks look more attractive than ever.