On Tuesday afternoon, Spirit Airlines (SAVE -1.29%) reported excellent results for the fourth quarter of 2018, as a multiyear turnaround effort finally paid off in a big way. Adjusted earnings per share soared 89% to $1.38. This matched the average analyst EPS estimate -- but was nearly twice what analysts had been expecting three months ago.

Spirit Airlines stock has already rallied about 45% in the past six months as the carrier has returned to strong unit revenue growth. Yet Spirit's optimistic first-quarter forecast suggests that the stock has plenty of upside remaining. 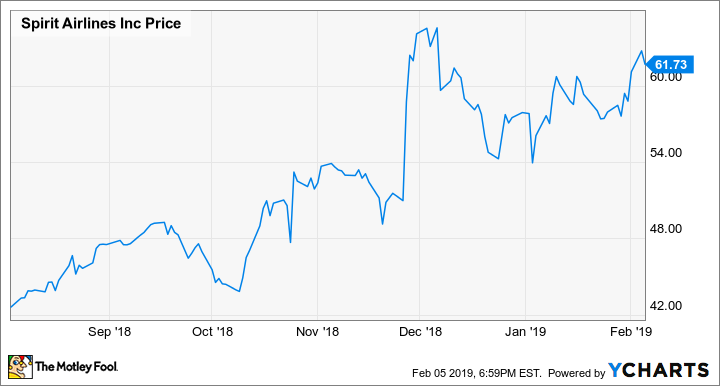 The key highlight of the fourth quarter for Spirit Airlines was that revenue per available seat mile (RASM) soared 11.4%. That result was roughly in line with a guidance update issued in late November (which called for an 11% increase), but it far outpaced management's initial forecast of 6% RASM growth. It also represented a massive acceleration in Spirit's revenue momentum relative to its 5.5% Q3 RASM gain and the 4.6% decline it experienced in the first half of 2018.

This huge jump in RASM more than offset a 7.6% uptick in unit costs, which was driven primarily by higher fuel prices and rising labor costs. As a result, Spirit's adjusted pre-tax margin rose to 14.4% from 11.8% a year earlier.

The Q1 outlook is strong

Looking ahead to the first quarter, Spirit Airlines expects RASM to rise approximately 5%. Based on Spirit's plan to increase capacity 16.5% this quarter, that would boost revenue 22% year over year to around $861 million, nearly $15 million ahead of the current analyst consensus.

Meanwhile, Spirit Airlines will face less cost pressure in Q1 than it did last quarter. In fact, management expects Spirit's average fuel price to decline to $2.06 per gallon this quarter from $2.15 per gallon in the prior-year period. That will offset most of the carrier's projected 2% to 3% increase in adjusted nonfuel unit costs.

Taking all aspects of the forecast together, Spirit's guidance implies adjusted EPS of roughly $0.85 to $0.95 this quarter. (That said, it's still too early in the quarter to be sure that EPS will reach this range.) This projection is roughly in line with analysts' estimates, but would be approximately double the $0.44 Spirit Airlines earned in the first quarter of 2018.

The rest of the year should be even better

While Spirit is on track to have a very solid first quarter, the outlook for the rest of 2019 is even stronger.

First, the timing of Easter and Passover will weigh on the carrier's RASM growth this quarter. JetBlue Airways -- which has the most similar route network to Spirit Airlines among the major airlines -- expects the calendar shift to reduce its unit revenue growth by about 2 percentage points in the first quarter. This implies that Spirit's underlying RASM growth rate is closer to 7% right now. The Easter shift will have a corresponding RASM benefit in Q2.

Third, Spirit expects nonfuel unit cost growth to be slower in the last three quarters of 2019 than in the current quarter. Similarly, fuel cost declines could be greater, as Spirit Airlines' average fuel price in Q1 2018 was $0.13 lower than its full-year average fuel price. Between fewer unit revenue headwinds and better cost trends after Q1, Spirit Airlines' margin expansion could accelerate in the last three quarters of 2019.

In after-hours trading on Tuesday, Spirit Airlines stock sagged. Presumably that's because Spirit's fourth-quarter results and earnings outlook only met expectations, and investors were hoping for a beat in light of the stock's massive rally over the past six months.

However, Spirit Airlines stock trades for less than 10 times analysts' 2019 earnings estimates. Furthermore, those estimates may be too low, given that Spirit is well positioned for even faster earnings growth beginning in the second quarter. The company also ended 2018 with $1.1 billion of cash and equivalents, giving it ample firepower to implement a substantial share buyback program this year.

Between its strong profitability and earnings momentum, massive growth prospects, and rock-bottom valuation, Spirit Airlines looks like a steal. Any short-term pullback in the stock would be a great time for long-term investors to jump in.