Shares of Vail Resorts (NYSE:MTN) took a spill last month after the ski resort operator reduced its guidance and reported a disappointing start to the ski season with weak pre-holiday resort visits. According to data from S&P Global Market Intelligence, the stock finished January down 11% on the news.

As you can see from the chart below, that slide owes entirely to the Jan. 11 update, which pushed the stock down by double digits. 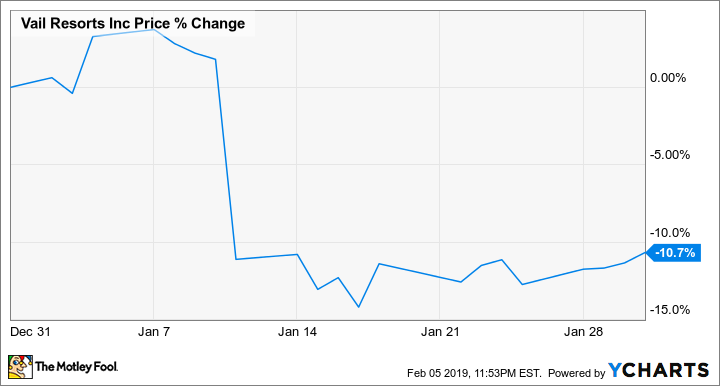 In the update, management said its ski business was strong, but resort visits had underwhelmed. Through Jan. 6, management said lift ticket sales were up 12.2%, dining revenue was up 14.8%, and total skier visits increased 16.9%. 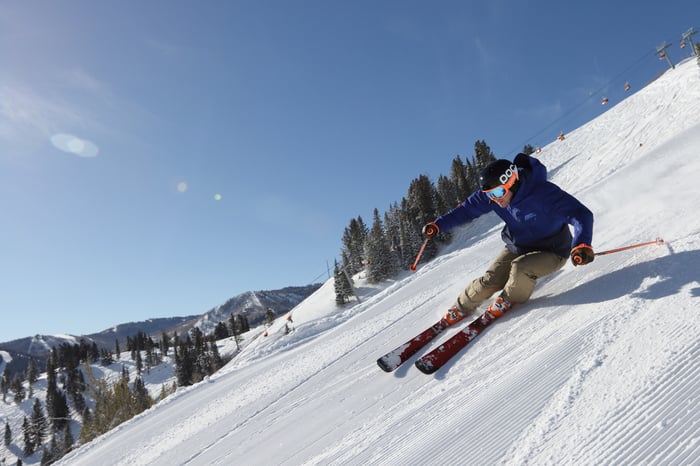 However, CEO Rob Katz said, "Despite the good conditions, our destination guest visitation was much lower than anticipated in the pre-holiday period, particularly December 1st through December 21st." Katz pegged concerns due to poor conditions over the past two seasons for driving resort visitors away, but noted that snow coverage had been much stronger this year.

As a result, Katz said the company now expects full-year resort EBITDA to come in slightly below the low end of its guidance of $718 million-$750 million. The resort segment, which combines its mountain and lodging segments, is essentially the company's entire business.

Given the earnings guidance cut, it's not surprising to see the stock dive. It's unclear if past year conditions were the real reason for weak resort visits, however. The new Ikon Pass as well as the similar Mountain Collective, which aim to match Vail's Epic Pass by granting access to a similar collection of ski resorts with one pass, may have taken a bite out of sales, and some have even speculated that the market crash in December and the fourth quarter cooled off visits as potential skiers chose to tighten their wallets instead of hitting the slopes.

We won't get a full report until March when the company announces second-quarter earnings results. The stock has recovered some of January's losses as shares are up 6.6% through the first three sessions of February on no apparent news. Despite the weak pre-holiday sales, investors can take some solace in the improved snow conditions.