Sangamo Therapeutics' (SGMO -4.36%) zinc-finger nuclease approach to gene editing has been heralded as a potential solution for millions of people with genetic disorders; but the company still hasn't produced a commercial-stage therapy even after more than 20 years of research. Unfortunately, the company's track record got more disappointing on Thursday when management reported lackluster results from an early-stage trial evaluating gene-editing therapy SB-318 in people with mucopolysaccharidosis type I (MPS I).

Individuals with MPS I, or Hurler syndrome, face a poor prognosis. The lysosomal storage disorder, caused by genetic mutations that impede the production of the alpha-L-iduronidase (IDUA) enzyme, occurs in 1 in 115,000 births. 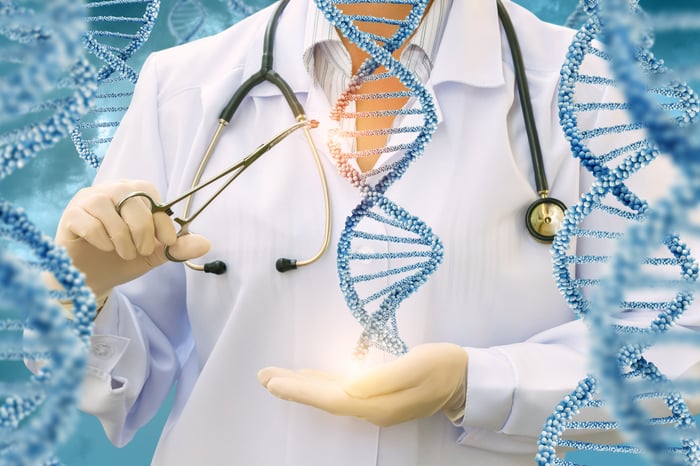 IDUA is critical to breaking down glycosaminoglycans (GAGs) dermatan sulfate and heparan sulfate. Because people with MPS I can't metabolize these complex carbohydrates normally, they experience life-shortening organ damage as the substances build up.

People with the severe form of the disease usually pass away in childhood, and people with the milder form typically don't live long past their 30s. BioMarin's (BMRN -0.57%) enzyme replacement therapy (ERT) Aldurazyme is the only treatment currently available, but life expectancy remains short despite the existence of a therapy.

The approach uses zinc-finger DNA-binding proteins to guide Fok1, a cutting enzyme, to a precise target in a person's DNA. To make an edit, two ZFNs are built with each containing one half of the Fok1 cutting enzyme. The ZFN pair binds to each side of the targeted DNA, and when Fok1's two halves combine, a cut is made, allowing for the new code to be inserted.

In the case of MPS I, Sangamo's SB-318 inserts a functioning copy of the IDUA-producing gene in the liver so the individual can produce IDUA in his or her body, eliminating the need for ERT infusions, essentially curing the patient.

The notion that SB-318 can restore IDUA production may be off-target given the data unveiled by Sangamo this week. In people receiving the treatment, there wasn't any evidence of a significant enough increase in IDUA activity to suggest this is an effective treatment.

Sangamo Therapeutics is going to analyze liver biopsy tissue to see if there's some evidence of successful gene editing, and it plans to continue evaluating patients, including by withdrawing them from ERT treatment, to further evaluate efficacy.

Sangamo's latest trial update isn't encouraging, especially in light of the fact that the company reported data last year showing little benefit from SB-913 in MPS II, or Hunter syndrome. People with MPS II can't produce the iduronate-2-sulfatase enzyme necessary for breaking down GAGs. Similar to the SB-318 study, SB-913 attempts to insert a functioning gene in the liver to restore enzyme production.

It's hard to rally around Sangamo Therapeutics' zinc-finger nuclease approach. The company's dustbin is littered with trial failures over the past two decades; that does little to inspire investor confidence. There's still a chance that this company can prove its gene-editing approach works, but if this doesn't happen soon, it could find itself losing the lead in gene editing to other approaches, including CRISPR/Cas9. Ultimately, there are over 6,000 genetic disorders and many have no treatment options; hopefully, that will change. Whether Sangamo's approach is the solution, however, remains in doubt.