Please ensure Javascript is enabled for purposes of website accessibility
Log In Help Join The Motley Fool
Free Article Join Over 1 Million Premium Members And Get More In-Depth Stock Guidance and Research
By John Bromels – Updated Apr 26, 2019 at 10:36AM

Through thick and thin, this top oil industry bigwig keeps rewarding its shareholders.

When you're thinking about your retirement, you should be thinking in terms of decades, not years. As lifespans continue to increase, your retirement portfolio needs to contain stocks that will continue to outperform during both the up years and the down years. Kind of like a marriage, except there's no wedding cake.

So, a dream stock should be one that has a proven track record of outperformance during both good times and lean times. One that I think fits the bill perfectly is oil major Royal Dutch Shell (RDS.A) (RDS.B). Here's why this could be the perfect stock for your retirement portfolio. 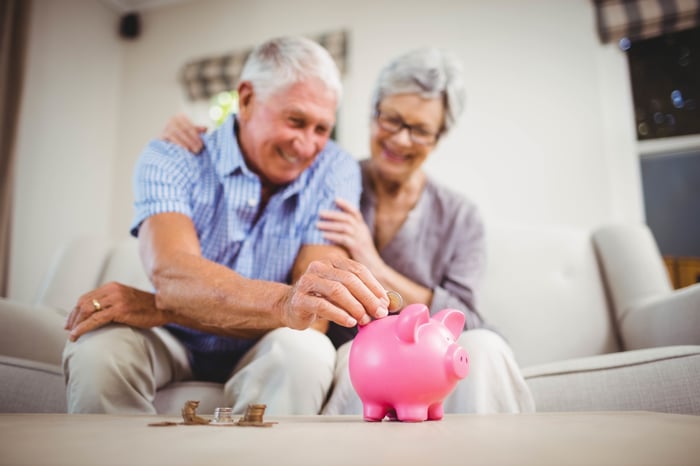 The good times were really rolling for Shell in Q3 2018. Oil prices were relatively high -- Brent Crude was trading at more than $70 per barrel for almost the entire quarter -- and Shell capitalized on the boom. During the quarter, the company churned out buckets of cash: more operating cash flow than it had generated in a single quarter for over a decade.

Shell put that cash to use in ways that benefited its shareholders. Of course, it fully paid its generous dividend -- currently yielding about 6% -- in cash. It also bought back $2 billion worth of shares and authorized further repurchases of $2.5 billion. Eventually, Shell plans to buy back $25 billion in shares. Shareholder-friendly moves like these make Shell an attractive investment.

But oil prices didn't stay that high for long! As luck would have it, oil prices began to fall on October 1, right at the start of Q4 2018. They dropped by more than 40% over the course of the quarter. Surely that would put a huge dent in Shell's performance.

Except it didn't. Shell's revenue and operating cash flow were even higher in Q4 2018 than they had been in Q3, and net earnings were only down by 4.3% sequentially -- and up by 46.7% over the year-ago quarter. This was due largely to higher natural gas prices, which allowed earnings from Shell's integrated gas segment to soar.

However, it's also thanks to Shell's status as an integrated oil company, meaning it doesn't just drill for oil; it also refines and sells gasoline and other refined products. Falling oil prices tend to hit independent drillers harder than refiners and marketers. By having an "all of the above" strategy, Shell is better able to protect investors' capital.

The "bad times" of the last quarter weren't really all that bad for Shell, but what about when things are absolutely terrible? Like during the prolonged oil price slump of 2014-2017, for instance? A lot of oil and gas companies were just in survival mode. Cost-cutting was rampant, as was dividend slashing.

Shell certainly did its fair share of cost-cutting during the slump, and that cost-cutting is paying off today in the form of higher margins. While it didn't cut its dividend, it did start a scrip dividend program, giving investors the option to receive dividends in shares rather than cash. The company has discontinued the program now that it's flush with cash. But Shell CEO Ben Van Beurden made a very savvy management decision, too: his purchase of British gas giant BG Group, which gave Shell exposure to the LNG market.

It might seem silly to make such a major acquisition -- the largest in the company's history -- in the midst of a downturn, but Van Beurden realized that not only was the LNG market growing much faster than the oil market, but because of the downturn, he could snap up the company at a bargain-basement price.

That move paid off. Since the 2015 acquisition, Shell's LNG sales have increased by 75%, and LNG demand is rapidly expanding, by more than 4% per year. Clearly, the BG acquisition was a winning move. Small wonder that Shell's return on capital employed -- a measure of how effectively management utilizes its cash -- is currently the highest of the oil majors.

Royal Dutch Shell is an excellent choice for a healthy portfolio. Its record of outperformance means you can feel comfortable buying it and holding it for the long term. Its shareholder-friendly track record -- even in times of market turmoil -- means it will continue to pay dividends in lean years. And at just 11.4 times earnings, its price is right.

Now is an excellent time to make an investment in this "dream stock."

Shell Plans to Cut Thousands of Jobs Amid Shift to Carbon Neutrality: What Investors Need to Know
356%