Please ensure Javascript is enabled for purposes of website accessibility
Log In Help Join The Motley Fool
Free Article Join Over 1 Million Premium Members And Get More In-Depth Stock Guidance and Research
By Adam Levy – Updated Apr 17, 2019 at 10:58AM

The telecom giant wants to be a service hub for a la carte streaming, not just a source for traditional pay TV.

T-Mobile (TMUS -0.10%) has been looking to get into video distribution since its Layer3 TV acquisition in December 2017. The company initially planned to launch a pay-TV service by the end of 2018, but it's pushed back those plans to the first half of 2019.

On the company's fourth-quarter earnings call, President and COO Mike Sievert said he saw an opportunity beyond just offering an alternative to traditional linear cable or satellite television. He sees T-Mobile becoming an integral part of the go-to market strategies for streaming video services. That would put T-Mobile more in competition with Amazon (AMZN 1.74%) Prime Channels or Roku (ROKU -1.72%) than Comcast (CMCSA -3.11%). 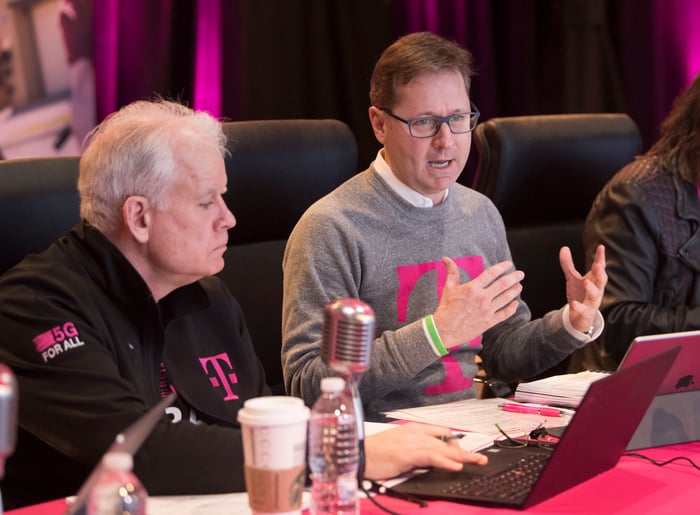 One bill to rule them all

With a growing number of consumers cutting the cord and a growing number of over-the-top (OTT) media services, T-Mobile thinks it's well positioned to help customers discover and pay for the subscriptions they want. On the other side of the market, T-Mobile thinks it can provide streaming services with better reach while taking care of the billing so that the streaming services can focus on producing great content.

"It's subscription-palooza out there. Every single media brand either has or is developing an OTT solution," Sievert told analysts. "We think we can play a role in ... helping you choose the subscriptions that make sense, billing for those things, search and discovery of content -- we think there's a big role for our brand to play in helping you."

T-Mobile already partners with Netflix (NFLX -0.87%). Subscribers on T-Mobile's unlimited family plan receive a "free" Netflix subscription. T-Mobile is, of course, paying Netflix for those subscribers and accounting for it in its family plan pricing. The carrier could offer add-on digital subscriptions for subscription video on demand (SVOD) services and integrate them all into a single bill.

Not the only show in town

T-Mobile isn't the first to consider the idea of being an a la carte video distributor.

Amazon Prime Channels has become a considerable source of revenue, generating an estimated $1.7 billion in high-margin sales for Amazon in 2018, according to analysts at BMO Capital Markets. They expect that number to climb to $3.6 billion next year. For reference, T-Mobile generated $32 billion in 2018.

Even Comcast sees the potential of offering distribution to OTT services through its Xfinity X1 platform. The company partnered with Netflix and has since made moves to integrate other streaming services into the on-demand platform. Like Amazon and Roku, Comcast also takes care of the billing for the streaming services its subscribers buy.

Roku has 23.8 million active accounts as of the end of the third quarter. Comcast has nearly as many cable subscribers, although X1 customers are only a percentage of those customers. Amazon Prime reaches over 100 million people in the U.S. T-Mobile has nearly 80 million customers total.

T-Mobile's advantage is its reach, but it's not well associated with video like other players in the field. T-Mobile may be able to leverage its existing partnership with Netflix as a way to onboard more customers to other streaming services. The rollout of its linear TV service later this year might be another platform for it to sell OTT subscriptions as well.

There's certainly a lot of money to be made as more and more streaming services come on board. That's especially true in comparison to T-Mobile's top and bottom lines. It's no wonder there's a growing number of competitors looking to get into a la carte streaming distribution as well.