Aurora Cannabis is one of Canada's biggest marijuana companies. An aggressive acquisition strategy has industry watchers thinking its annual marijuana production could climb to about 700,000 kilograms from 100,000 kilograms today. It will be awhile before investors see the full benefit of the company's expansion plans, but Aurora Cannabis is already seeing sales grow because of its investments. 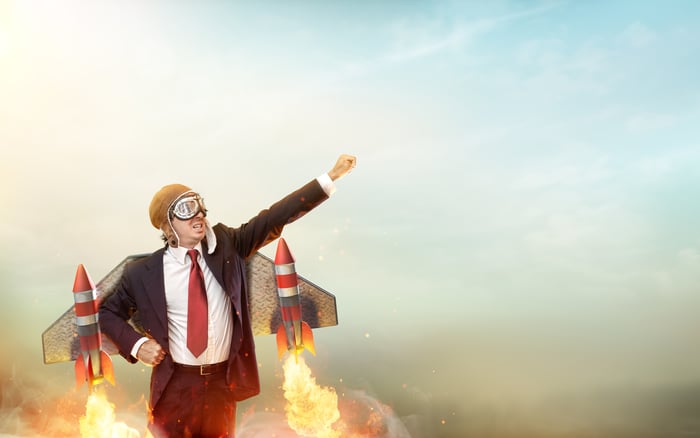 The company revealed unaudited results for the calendar quarter ending Dec. 31 in early January. The quarterly results include the first sales from Canada's recreational market, which opened for business in mid-October.

Management said sales for last quarter will be between 50 million and 55 million Canadian dollars, up from just CA$11.7 million last year. Including acquisitions, Aurora Cannabis' pro forma revenue was CA$35 million in the previous quarter (its fiscal Q1), so the adult-use market added as much as CA$15 million to sales during its first six weeks of operation.

Aurora Cannabis also told investors its annualized production capacity has reached 100,000 kilograms, up from 70,000 kilograms in October, and that it's on track to increase production to an annual pace of 150,000 kilograms before this quarter ends. This doubling of production over the past six months puts it in a perfect position to pocket additional revenue growth as Canada's recreational market matures.

Aurora Cannabis is reporting its finalized quarterly results tonight (Feb. 11) after the closing bell. Its CEO, Terry Booth, plans to host an earnings conference call with investors at 6 p.m. EST. During the call, investors will want to pay particular attention to what he says about the company's production costs, because reducing per-gram expenses is key to its turning an operating profit. Booth may also offer financial guidance and additional insight into how quickly Aurora can reach its current funded production target of 570,000 kilograms per year.

Canadians spend about CA$6 billion annually on marijuana, according to Statistics Canada, so Aurora Cannabis' sales could climb much higher from here as revenue shifts from the black market to Canada's regulated markets. The global market opportunity could be even more important to Aurora Cannabis' future, though. Worldwide, spending on marijuana totals $150 billion per year, according to the United Nations, so last quarter's results could be just the tip of the iceberg.