Please ensure Javascript is enabled for purposes of website accessibility
Log In Help Join The Motley Fool
Free Article Join Over 1 Million Premium Members And Get More In-Depth Stock Guidance and Research
By Jeremy Bowman – Updated Apr 17, 2019 at 11:55AM

Shares of the department store slipped on an underwhelming holiday sales report.

While much of the market was surging last month, Macy's (M -2.16%) shares were sliding after the department store chain reported disappointing holiday sales. As a result, the stock finished January down 12%, according to data from S&P Global Market Intelligence.

As you can see from the chart below, the stock plunged 18% on Jan. 10 after its holiday sales report came out. 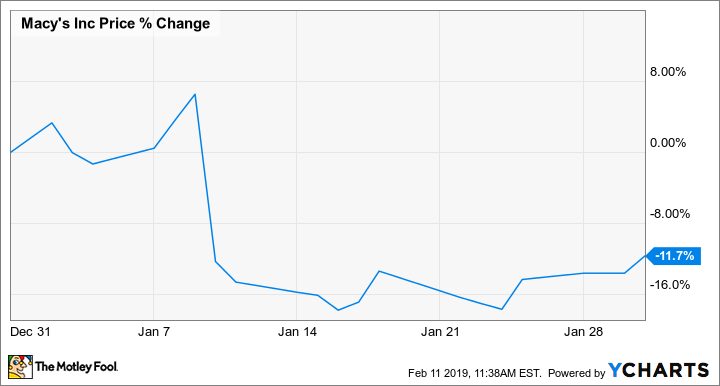 Macy's stock had actually gained coming into its holiday sales report as broader data had shown that retailers saw strong growth during the peak shopping season. A report by Mastercard SpendingPulse said that retail sales increased 5.1%, and apparel sales -- Macy's core business -- were up 7.9%. But in its holiday report, Macy's said that comparable-store sales in November and December increased just 0.7% on an owned basis, or 1.1% on an owned-plus-licensed basis, representing a slowdown from earlier in the year. The company also lowered its full-year adjusted EPS guidance from the $4.10-to-$4.30 range to anywhere from $3.95 to $4.

CEO Jeff Gennette said, "The holiday season began strong -- particularly during Black Friday and the following Cyber Week -- but weakened in the mid-December period and did not return to expected patterns until the week of Christmas." It wasn't clear why Macy's sales slowed in mid-December.

Macy's peers, including J.C. Penney, Kohl's, and Nordstrom, also reported underwhelming sales, so the weakness may simply have come from shoppers continuing to turn away from department stores in favor of e-commerce sites, off-price chains, and other options. Gennette said that a number of Macy's initiatives -- including Backstage, Loyalty, Store Pickup, and Vendor Direct, which allows suppliers to fill customer orders directly -- delivered growth, and drove a double-digit increase in online sales.

Still, given the guidance cut and the slower-than-expected growth, it's not surprising to see the stock tumble last month. We'll learn more when Macy's presents its full earnings report, which is expected at the end of the month. Analysts see earnings per share falling from $2.82 to $2.54 and revenue falling 2.3% to $8.47 billion.