The answer depends on whether you look at the company's short-term or long-term prospects.

There was a time when it looked as if NVIDIA (NVDA -2.81%) could do no wrong. Terrific growth in the gaming and data center businesses made the graphics card specialist a hot stock market favorite before things started changing drastically in October last year.

As it stands, NVIDIA stock has lost nearly half its value in the space of just over four months thanks to the fallout from the cryptocurrency bust. The chipmaker gave investors another shock when it gave its guidance a big haircut at the end of January, and it could be the bearer of more bad news when it releases its fourth-quarter results on Feb. 14. 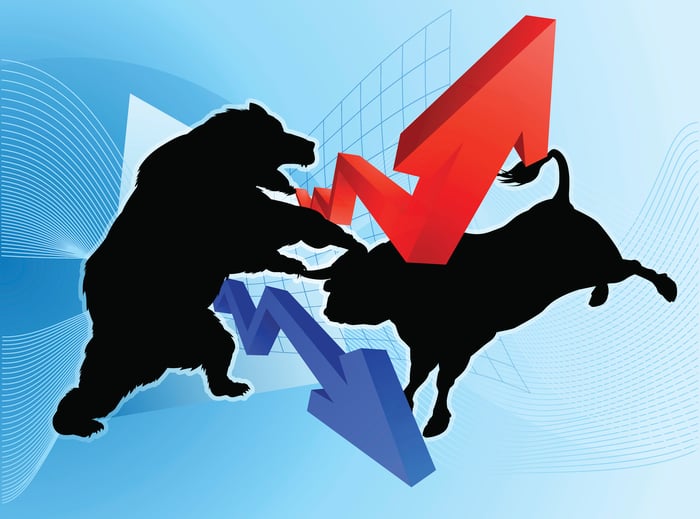 However, savvy investors might be looking at NVIDIA's crash as an opportunity. It now trades at less than 20 times earnings as compared to a price-to-earnings (P/E) ratio of more than 50 a year ago and is sitting on some impressive catalysts that could boost long-term growth. 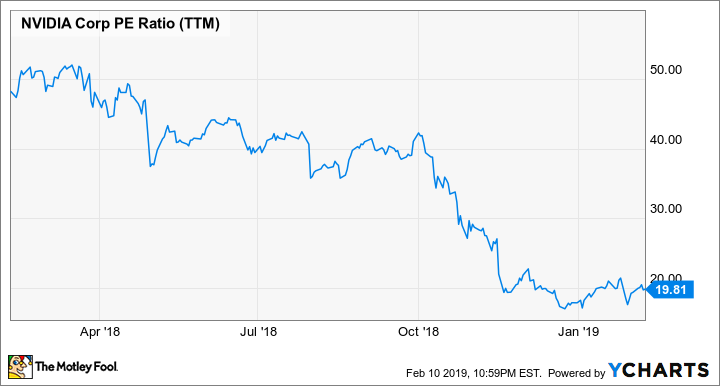 But at the same time, the rising threat from rival Advanced Micro Devices (AMD -2.51%) and other chipmakers could pose a serious challenge to the long-term story. So which of the two arguments should investors buy into?

A resurgent AMD poses the biggest threat to NVIDIA. AMD's latest results indicate that it could beat the broad market weakness in 2019 and end up delivering high-single-digit revenue growth. But the highlight of AMD's recent report was that the company seems to be making strong progress in the data center space, which is ideally NVIDIA's stronghold.

AMD's graphics card revenue was up on a sequential basis last quarter thanks to strong data center sales. The company expects its data center momentum to continue on account of the new 7-nanometer (nm) GPUs (graphics processing units) that were recently launched to compete against NVIDIA's 12nm Tesla GPUs.

AMD's technological advantage of making GPUs based on a smaller node seems to be shifting the momentum in its favor, while NVIDIA recently conceded that it closed fewer data center deals last quarter. However, that's not the only problem for NVIDIA.

The high prices of the company's latest GPUs are hurting NVIDIA's sales. The company conceded in its press release that "customers may have delayed their purchase while waiting for lower price points and further demonstrations of RTX technology in actual games." This is where AMD could step in with its latest Radeon VII GPU, which promises solid performance at a lower price when compared to the RTX 2080 Founder's edition and the RTX 2080 Ti.

Of course, NVIDIA is packing more technology into its latest graphics cards, but ray tracing isn't widely available on a lot of games just yet. This could shift the momentum in AMD's favor thanks to its strategy of delivering performance on a budget.

So AMD's rise can directly impact NVIDIA's performance in the gaming and data center end-markets that collectively account for 80% of total revenue.

However, there's a good chance that NVIDIA's troubles might be short term in nature. After all, the company dominates the graphics card market by a handsome margin and is taking concrete steps to increase its lead in critical areas such as data centers.

For instance, NVIDIA has been talking a lot about its ray-tracing technology and why it could be a big deal. Of course, there aren't many games on the market that support this technology just yet, and AMD is reportedly developing its own ray-tracing tech, but it cannot be ignored that NVIDIA is the only one that packs this feature as of now.

Moreover, the company is expected to come out with its own 7nm GPUs in 2020, which would put NVIDIA and AMD on an equal footing. AMD has been the first to market with a 7nm GPU, as NVIDIA remains stuck to the 12nm platform, but the former's advantage won't last for long. As such, it's unlikely that AMD will be able to eat a lot into NVIDIA's dominant GPU market share, which stood at 74% in the third quarter of 2018, according to Jon Peddie Research.

Meanwhile, NVIDIA is pushing the envelope in the data center space with a new GPU that's capable of artificial intelligence (AI) inferencing. Graphics cards are mainly used to train AI models, but NVIDIA's Tesla T4 is specifically directed at inferencing. That's a smart move, as NVIDIA believes that inferencing could be a $20 billion opportunity over the next five years.

At the same time, investors shouldn't miss the fact that NVIDIA is making solid progress in the self-driving-car space. So there is no dearth of long-term opportunity for the company, which is why it looks like a value play at its current valuation.

NVIDIA's P/E ratio of 19.8 is significantly lower than its five-year average multiple of 34.5, which means that there has never been a better time to buy the stock. But optimists should keep in mind that the company faces strong near-term headwinds that could weigh on its financial performance and the stock price.

NVIDIA needs to ensure that it gains an upper hand on AMD as soon as possible, else it might find it difficult to turn its fortunes around and look more like a falling knife instead of a value play.