Please ensure Javascript is enabled for purposes of website accessibility
Log In Help Join The Motley Fool
Free Article Join Over 1 Million Premium Members And Get More In-Depth Stock Guidance and Research
By Keith Speights - Updated Apr 14, 2019 at 9:26AM

J&J's latest acquisition might appear to threaten its partnership with Alphabet to develop robotic surgical systems. But another player could be affected even more.

If you had any doubts as to whether or not Johnson & Johnson (JNJ -0.09%) is serious about robotic surgery, you now have your answer. The healthcare giant announced on Wednesday that it plans to acquire privately held robotic surgery company Auris Health for $3.4 billion.

There's one interesting wrinkle to this story, though. Johnson & Johnson already partners with Alphabet (GOOG 2.32%) (GOOGL 1.88%) subsidiary Verily on developing robotic surgery technology through a joint venture, Verb Surgical. Does the Auris acquisition amount to J&J spitting in Alphabet's face? 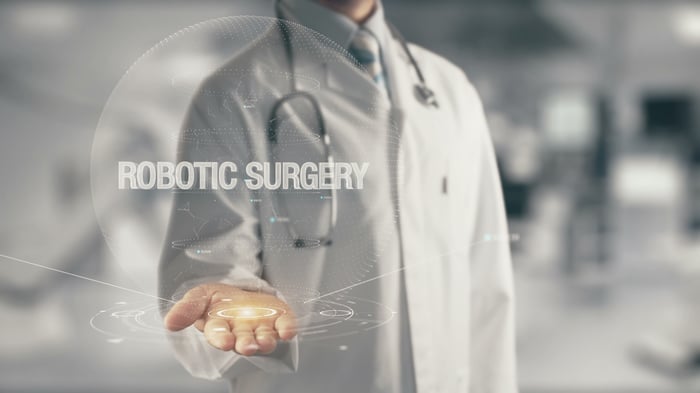 Johnson & Johnson's Ethicon medical-device subsidiary began working with Auris Health back in May 2018. At the time, the two companies said that they planned to develop robotically assisted systems for removing potentially cancerous nodules from the lungs.

Auris had secured FDA approval for its first commercial product just a few months earlier, in March 2018. The company's Monarch system is used to diagnose and treat small, hard-to-reach nodules in the lungs of patients with lung cancer.

The acquisition by J&J is obviously a big coup for Auris Health, which had raised at least $500 million previously in several rounds of private equity financing deals. Not only does Auris receive $3.4 billion in cash upfront, it's eligible for another $2.35 billion in potential milestone payments.

However, the deal also boosts J&J's presence in the fast-growing field of robotic surgery. Buying Auris Health gives Johnson & Johnson a ready-to-sell system for the lung cancer market, an area where J&J already has a big focus with its Lung Cancer Initiative. It also positions the company to expand into other areas of minimally invasive robotic surgery.

What about Verily and Verb?

All of that sounds great, but what does J&J's acquisition of Auris Health mean for its Verb Surgical joint venture with Verily? If you believe J&J, not much.

Ashley McEvoy, Johnson & Johnson's executive vice president and worldwide chairman for its medical devices business, said that J&J remains "very committed to our partnership with Verily on the development of the Verb Surgical Platform." McEvoy added that the combination of the Verb and Auris technologies and J&J's medical implants and solutions "create the foundation of a comprehensive digital ecosystem to help support the surgeon and patient before, during, after surgery."

So, no spitting in the face of Alphabet after all, right? Probably not. The same day that Ethicon announced its partnership with Auris Health last year, J&J prominently included its efforts with Verb Surgical in a business review of its medical device operations.

There hasn't been a lot of news from Verb. But J&J stated in May 2018 that the joint venture with Verily had "multiple working prototypes" of a robotic surgical system and was "conducting pre-submission meetings with global regulatory agencies." The company reiterated previous projections that a commercial launch of Verb's first system was expected in 2020.

It isn't likely that Alphabet is concerned in the least about J&J's acquisition of Auris Health. But it could be a different story for the current leader in robotic surgery, Intuitive Surgical (ISRG 0.32%).

J&J's purchase of Auris brings one of the most renowned pioneers in robotic surgery to the company's management team. Dr. Fred Moll, founder and CEO of Auris Health, will join Ethicon. Prior to his launch of Auris, Moll founded another then-small robotic surgery company. That company was Intuitive Surgical.

Intuitive hasn't had the robotic surgery market all to itself. There have been smaller players launch products, including TransEnterix and Mazor Robotics, which was recently acquired by Medtronic. None of these products, however, have directly competed against Intuitive's da Vinci robotic surgical system.

But Johnson & Johnson could be a formidable new challenger with Moll helping to guide its strategy. Also, Intuitive is waiting for FDA approval of its new ION system that's designed for minimally invasive lung biopsy. ION could compete directly against the Monarch system developed by Auris Health that will soon be in J&J's product lineup.

Shares of Intuitive Surgical fell slightly after J&J's announcement that it was acquiring Auris Health. Should Intuitive's shareholders be worried? Probably not -- at least not too much. The market should be big enough to support multiple players over the long run. And even with a giant like J&J more firmly than ever in the thick of the robotic surgical systems arena, Intuitive Surgical still retains some significant competitive advantages.

Make no mistake, though: Johnson & Johnson is serious about becoming a contender in robotic surgical systems. With its $3.4 billion investment in Auris Health and ongoing partnership with Alphabet's Verily subsidiary, J&J will be just that.