The Danish jewelry maker got a welcome reprieve after new management unveiled its comprehensive diagnosis.

Pandora A/S (NASDAQOTH: PANDY) has been in the doldrums for the better part of two and a half years. After peaking at over 1,000 Danish kroner in 2016, the stock hit an unsightly 254 kroner per share just recently -- a stunning 75% decline for the world's most recognized jewelry brand. (The exchange rate on Feb. 13 is $1 = 6.60 Danish kroner.)

The company's recently reported fourth-quarter results reflected the deterioration. While revenue grew 3%, that was entirely due to store expansion and the acquisition of franchisees. Like-for-like sales fell an unsightly 7%, and Q4 EBITDA margins shrank from 40.1% to 35.7% last quarter. 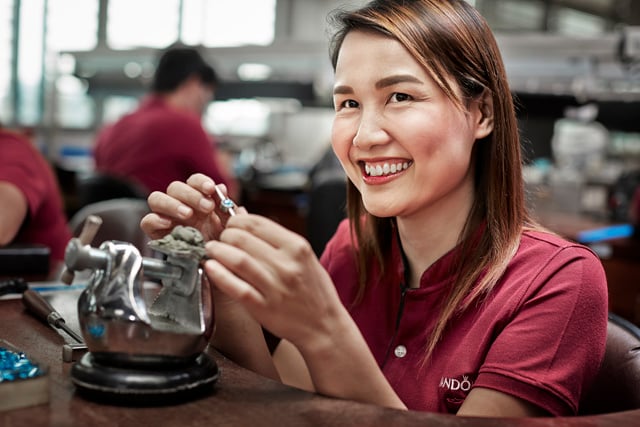 These pillars aim to correct the errors of previous management, which overemphasized aggressive growth at all costs. The new plan calls for pulling back on store openings to focus on stabilizing the brand and reigniting same-store sales.

Investors can think of the "commercial reset" pillar as ripping off a proverbial Band-Aid, correcting for two sins of prior management: overly aggressive sell-ins to franchisees and too many promotions.

Over the past couple of years, Pandora aggressively sold inventory into franchise stores, a move that would bump up revenue in the short term. However, Pandora is now paying the price, having to take back significant unsold inventory, which led to ugly numbers this year.

The current team believes it can reduce sell-in packages to franchisees from eight weeks to four weeks of inventory. While the program should help reduce the amount of slow-moving items in franchise stores, the initiative will have a near-term negative 1% impact on 2019 sales.

Perhaps more importantly, Pandora will reduce aggressive promotions. While the company will still have promotions around major holidays and limited editions, reduced promotions between major events should lower revenue by between 2% and 4% in 2019. However, Schwartz and Boyers believe the reduced promotions are the right thing to do to preserve Pandora's long-term brand value.

In conjunction with lower discounts, the company also hopes to reinvigorate Pandora's brand promise. This is perhaps the most important feature of management's new program, as brand marketing is the most relevant element to reigniting sales growth. Investors will have to wait, however, as management is planning to launch most new marketing initiatives in Q4 2019, the holiday quarter.

The plan features a new type of marketing communications strategy, which will be paired with a "digital-first Rewards system of the future," to encourage regular charm purchases and collecting. This seems smart, as Pandora's charms -- which make up over half of its sales -- lend themselves particularly well to a sticky rewards program.

In fact, it's surprising the company has been so slow-moving to implement such a program. Not only would a rewards program spur recurring charm purchases, but it would also give the company better customer data to help with new charm designs and targeted marketing.

The new management team is also taking a hard look at costs. Despite many cost-cutting efforts already completed over the past year, Boyers and Schwartz believe there's still a sizable cost-reduction opportunity of 1.2 billion Danish kroner, or 5% of sales. These cuts won't come predominantly from any one category, but rather comprise several smaller savings wrung out across costs of goods, IT, and administrative expenses.

Finally, Boyers and Schwartz unveiled how the company will function differently, especially from a personnel standpoint. Chief Creative Officer Stephen Fairchild will now also be responsible for Pandora's global brand expression. The intention behind the combined role is to better unify the company's product design with external branding and product launches. The company is also looking to hire a chief merchandising officer, to better coordinate product, manufacturing, and finance.

In addition, Pandora will be changing both employee and franchisee incentive agreements to better align them with shareholder value creation.

Sometimes companies need to insert new management to make the hard choices prior leadership was unwilling to make. Pandora's efforts to reinvigorate its brand, while correcting the short-termism, of prior management is absolutely the right thing to do. Whether the company finds success will depend on execution, though at a price of just seven times earnings, the bar for the stock is set fairly low.