Shares of Avon Products (NYSE:AVP) took a dive once again today after the cosmetics company posted another disappointing quarterly report: Revenue fell, and the multilevel marketer saw a decline in active representatives. As of 2:47 p.m. EST, the stock was down 10% on the news.

Avon said fourth-quarter revenue fell 11% in the quarter to $1.4 billion, though most of the decline was owed to currency exchange, as comparable revenue was down just 1%. Still, that result missed analyst estimates of $1.43 billion. 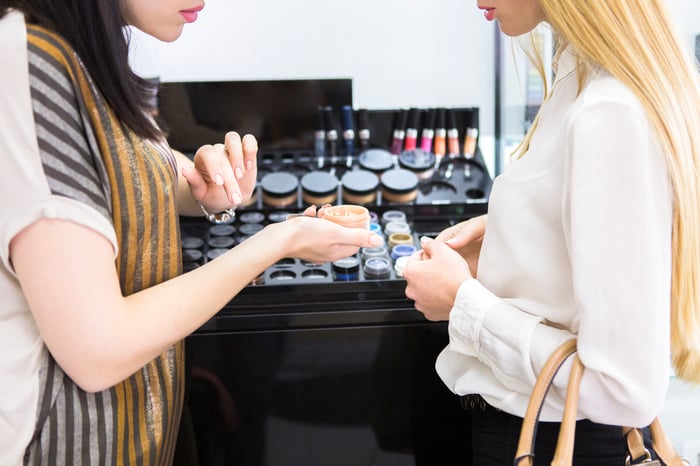 Adjusted gross margin fell 140 basis points to 59.7%, in part due to currency exchange, and active representatives declined by 6%, falling in most of the regions in which the company operates. Adjusted operating margin also declined by 420 basis points to 5.7%, due to currency exchange and to the company's investments in turnaround initiatives. Adjusted earnings per share came in at $0.07, down from $0.12 a year ago, which matched estimates.

We are in the initial stages of our turn-around plan with fourth-quarter results showing sequential improvement in revenue trends in 4 of our top 5 markets, as well as some early signs of progress against our core strategies. As we look over the course of 2018, we are seeing tangible signs of increased productivity by our Representatives, with sequential increases in Average Representative Sales, Net Price Per Unit and e-commerce.

Avon's stock has essentially been in free fall for the last five years, down 82% during that period, as the company's multilevel marketing model is looking outdated and it's undergone a series of leadership changes.

Avon continues to take steps to cut costs, including cutting its workforce by 10% after an 8% reduction last year, and selling its China manufacturing facility. Management did not provide guidance, but analysts see revenue continuing to decline in 2019.

At this point the stock has fallen so far that it may hold some appeal for risk-seeking investors, but there's no clear sign of a turnaround so far.