Find out how earnings helped these companies.

Thursday was a volatile day on Wall Street, as major stock indexes lost a lot of ground early in the day but then rebounded to finished mixed. Gains for the Nasdaq Composite came even as Dow Jones Industrial Average fell modestly, and although investors spent much of the session trying to parse through the implications of the latest economic report on retail sales, earnings played a key role in moving many well-known stocks. Marathon Oil (MRO -0.61%), AstraZeneca (AZN 0.46%), and Bloomin' Brands (BLMN 0.36%) were among the top performers. Here's why they did so well.

Shares of Marathon Oil picked up 9% after the energy company reported its fourth-quarter financial results. Marathon said that production levels and earnings both came in slightly stronger than expected, with the company benefiting particularly from its domestic assets in key areas like the Eagle Ford and Bakken. The company also said that it expects to continue using its successful strategy in 2019, with controlled spending on capital investment geared toward Marathon's highest-potential projects. That's a good way to hedge against the possibility of continued weakness in crude oil prices, but the company also has plenty of upside if energy markets recover this year. 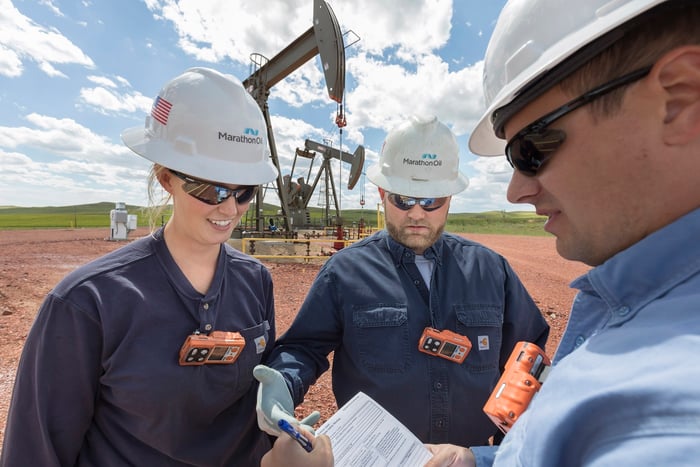 AstraZeneca's stock gained 9% following the release of the drugmaker's fourth-quarter financial report. Total revenue for the quarter was 11% higher than in the year-earlier period, and core earnings per share showed an even more impressive 22% gain. CEO Pascal Soriot highlighted the new medications that contributed to AstraZeneca's recent success, but the company also has a long way to go in its efforts to develop a long-term strategic vision that will help it become what Soriot referred to as "more agile, collaborative, and focused as we enter a period of sustained growth." Some investors are still worried about potential price controls, but AstraZeneca is taking steps to insulate itself from any negative effects from such political moves.

Finally, shares of Bloomin' Brands jumped 9%. The operator of restaurant chains including Outback Steakhouse, Carrabba's Italian Grill, and Bonefish Grill said that comparable-sales performance domestically was solid, climbing 1.6% on particular strength at Outback. Earnings soared by two-thirds from year-ago levels, and the company believes that it can accelerate its comps growth in 2019. Bloomin' still has some challenges to overcome, including cost pressures that could restrain bottom-line growth in the coming year to single-digit-percentage gains. Nevertheless, many shareholders hope that this could finally mark the end of a tough environment for restaurant stocks generally and Bloomin' Brands in particular.

These Canadian Oil Stocks Are Up Big Today