The company is supplementing its acquired revenue haul with expansion throughout its existing franchise system.

Global hotel franchisor Wyndham Hotels and Resorts ( WH -1.94% ) attempted a dramatic transformation last year when it completed both the acquisition of La Quinta Holdings and a spinoff from parent Wyndham Destinations on successive days (May 31 and June 1, respectively).

So far, the transformation appears to be a success, as La Quinta's roughly 900 franchised mid-scale hotels have helped lift Wyndham's average daily rates (ADR), while Wyndham continues to increase the scale and revenue potential of its original franchised brands.

Below, we'll review fourth-quarter 2018 results, released on Wednesday, for perspective on Wyndham's first few months as a significantly altered organization. (Note that in the discussion that follows, all comparable numbers refer to the prior-year quarter, the fourth quarter of 2017.) 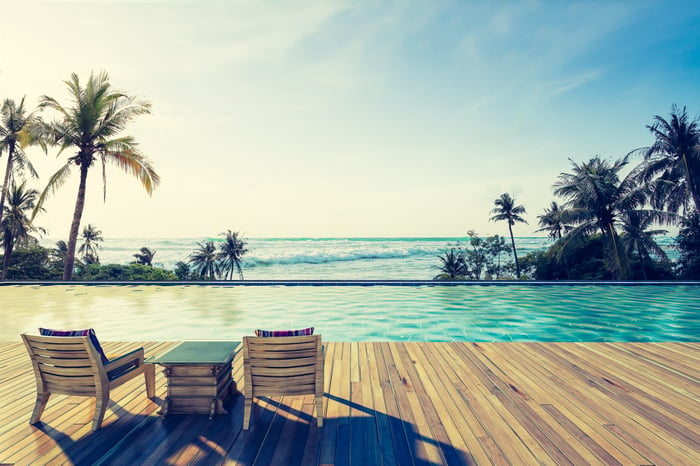 In Wyndham's earnings conference call, CEO Geoff Ballotti discussed, among other topics, the company's aim to expand in the economy and mid-tier segments of the hotel industry. As it successfully integrates La Quinta, management sees other opportunities to lift its systemwide ADR and build supply in these active areas of the broader hotel market:

Another significant objective of ours is to continue elevating the economy and mid-scale experience, including new prototypes for many of our brands. For our largest U.S. economy brand, we are working with our franchise advisory council to initiate a refresh of Days Inn by Wyndham, requiring our franchisees to invest in the quality of the sleep experience in the overall standards of the economy brand, which focuses on the little things that surprise and delight, and a brand that has moved up to third place from sixth place in the J.D. Power economy guest satisfaction rankings over the past three years. We know from our experience with Super 8's new Innovate brand standard that a thoughtful, cost-effective refresh program could have a very meaningful impact on guest experience, while driving favorable market share and operating margin improvements.

Wyndham provided its outlook for 2019 alongside earnings. Management expects RevPAR growth of 1% to 3%, and room growth of 2% to 4% in 2019. Revenue is expected to land between $2.11 billion and $2.16 billion, which at the midpoint will represent an increase of 14.3%, benefiting comparatively from the La Quinta acquisition.

Adjusted EBITDA is anticipated to improve by 19% to 22%, from $605 million to $620 million. Finally, adjusted diluted earnings per share are pegged at a band of between $3.05 and $3.17, versus $2.71 in 2018. Again, for the most part, these increases will come courtesy of La Quinta's contribution, yet Wyndham is managing to increase the value of its core business alongside this acquired growth.