The hotel chain saw improvements in the third quarter but still has a ways to go,

Few, if any, industries have been hit harder by the pandemic than the hotel industry. Travel restrictions and consumer concerns, as well as social distancing protocols, have kept people from vacationing and traveling, which severely hurt hotel earnings over the typically strong summer months. But now, with COVID-19 cases not only continuing but spiking to all-time highs as we move through the fall into the winter, there is not yet a light at the end of the tunnel.

This leaves hotel chains like Wyndham Hotels and Resorts (WH -1.09%) in a very uncertain spot not only now but for future bookings next spring and summer. People are hesitant to book summer vacations until they see the pandemic abating and the advent of a safe and effective vaccine. Until then, it will be tough going for hotels, including Wyndham.

Wyndham had a decent third quarter, beating earnings estimates. The bar was set pretty low, but the company did show positive net income in the quarter, which is an improvement on last quarter when Wyndham had a $174 million net loss. 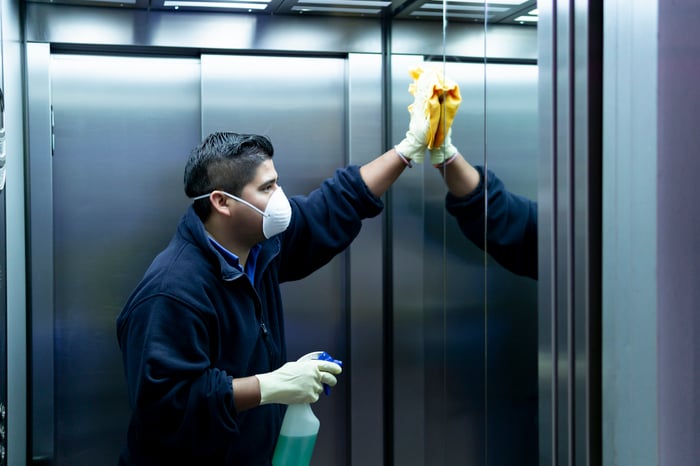 Net income in the third quarter was $27 million, which was still down 40% year over year, but it was the most profitable quarter of the year. Earnings per share were down about 38% year over year to $0.29. But for the first nine months, Wyndham has suffered a $125 million net loss.

Revenue was also solid in the quarter, as the company generated $337 million in revenue, down 66% from the third quarter of 2019. Still, it was a far better number than Q2. Through the first nine months, revenue is down 50% to $1 billion. Most of the revenue, about $236 million, came from franchise fees, while $101 million were from hotel management.

A more relevant metric that hotels use is revenue per available room (RevPAR). The RevPAR in the third quarter for its franchised properties was $28.83, which was down 36% year over year. In the hotel management segment, RevPAR was down 48% to $34.44. In the economy segment in the U.S., RevPAR was down 25% to $33.86. These numbers are below the average RevPAR for the quarter, which was $48.58, according to Smith Travel Research.

Through the pandemic, the company has managed to keep open 99% of its hotel rooms in the U.S. and 97% globally. Wyndham President and CEO Geoffrey Ballotti said the following in a press release:

Third quarter room openings also improved sequentially both in the U.S. and internationally and we grew our pipeline by 3% to 185,000 rooms globally. Importantly, we executed 152 hotel agreements, including 23% more domestic conversion signings than the third quarter of 2019.

Also, Wyndham's cash position has increased by $71 million to $735 million in the quarter due to strong cost containment and expense management. The hotel company was able to reduce expenses by 43% in the quarter to $266 million due to significant reductions in marketing and loyalty program costs and cost reimbursements. At the end of the quarter, the company had $1.2 billion in total liquidity, including $501 million in a revolving credit facility.

However, the stock looks overvalued with a price-to-earnings ratio of 28 and a price-to-book ratio of 4.5. Given the uncertainty that remains in the industry, out through next summer, this stock is not a buy right now. The valuation should continue to drop and might be worth a look in the next few quarters, but right now, there are better places for your investment dollar.