Please ensure Javascript is enabled for purposes of website accessibility
Log In Help Join The Motley Fool
Free Article Join Over 1 Million Premium Members And Get More In-Depth Stock Guidance and Research
By Royston Yang – Jun 11, 2020 at 8:35AM

The hotel chain is hastening conversion rate even as it navigates nimbly through this pandemic.

The COVID-19 pandemic has dealt a heavy blow to the hospitality industry. Throughout the world, many hotels and inns have suffered precipitous drops in occupancy and room rates. Wyndham Hotels & Resorts (WH -1.10%) is no exception, as revenue per available room (RevPAR) declined 23% globally due to travel restrictions. Occupancy rates, at their lowest point in the week of April 11, averaged around 22% across the company's hotel portfolio.

As the U.S. suffers record numbers of job losses, more people are also putting off discretionary travel as they tighten their belts. It may take a while before consumer spending habits revert to prepandemic levels, and consumers' propensity to spend may remain suppressed unless employment levels improve. Many hotel chains may, therefore, suffer extended bouts of low occupancy, putting further pressure on their financial performance.

With such a bleak outlook, does Wyndham's stock still qualify as a buy? 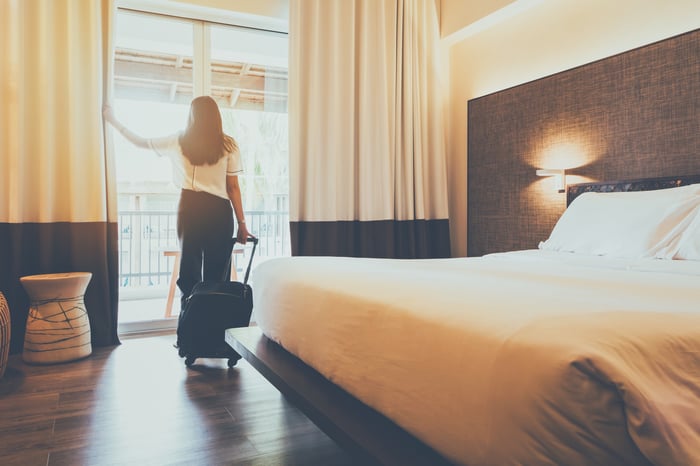 Wyndham's hotel portfolio caters mainly to leisure travelers, at around 69% of total stays. This means that, as business travel has been severely curtailed due to air travel bans, the company's hotels are insulated against the fallout resulting from a dearth of business travelers. Moreover, 87% of the company's U.S. hotels are located in "drive-to" locations in suburban areas and close to interstate highways. As a result, 96% of U.S. guests originate domestically, and with 99% of hotels being select-service ones, Wyndham also needs a lower occupancy rate of just 30% to break even. Note that U.S. hotel rooms make up around 61% of total system rooms.

The statistics above mean that the company is less impacted by the pandemic than more upscale hotel chains, as it has an overall lower cost structure. That said, the ill effects from the pandemic did push RevPAR down significantly and impacted new construction openings and conversion volumes, though we believe this is only for the short term.

The company reported weaker performance during its first-quarter earnings, with revenue in the hotel franchising division down 10% year over year and revenue in hotel management down 15% year over year.  Liquidity remained healthy, though, as the company had renegotiated its debt covenants with its borrowers and obtained waivers until June 30, 2021.

Wyndham has also eliminated 440 positions in total, reduced capital spending to focus only on high-priority projects, eliminated nonessential spending, and indefinitely suspended CEO Geoffrey Ballotti's salary and the board of director's cash compensation. These moves should save the company up to $255 million and allow the business to soldier on despite the headwinds.

Ballotti has remarked about how important conversions are as part of Wyndham's strategy through up and down cycles. "Conversion" refers to the process of converting independent hotels to join Wyndham brands, thereby boosting the number of franchised rooms within the system and adding to the company's asset-light operating model.

Note that during the global financial crisis in 2007-2009 the company posted 3% annual global system growth by increasing its number of franchised rooms from 550,600 in 2007 to 568,000 in 2009. "Conversion" made up 86% of total room openings for the company during this period, underscoring the strength of the conversion model during crises.

Wyndham is the world's largest hotel franchisor brand, with 9,280 hotels worldwide as of Dec 31, 2019. There is still a large addressable market in both the economy and midscale segments in the U.S. of up to two and a half times the number of franchised hotels in the company's system, opening up vast opportunities for growth in the years ahead. Being asset-light is a boon for the business as limited capital expenditure is required, and the company can also scale up faster than other asset-heavy hotel chains through conversions.

A unique and resilient business model

Wyndham offers an interesting investment proposition for investors. The company runs a unique and resilient business model that can not only withstand severe crises but also allows it to thrive and steadily grow its franchised hotel portfolio.

Although quarterly dividend has been cut from $0.32 to $0.08 per quarter as the company seeks to conserve cash in the near term, the goal is to gradually raise the dividend when visibility improves for the industry and travel demand recovers. Investors may need to stomach some short-term pain, but the long-term prognosis for the company looks decidedly sanguine.

3 Stocks I Bought Last Week, and 1 Stock I Sold