Large-cap stocks have historically grown slower than those in the mid-cap and small-cap categories. But the rise of new technologies and distribution channels and an obsession with acquisitions and finding new efficiencies have changed that somewhat. Established companies still tend to be more stable than younger, smaller ones. But whether investors are looking for conservatively valued dividend generators or businesses with high-powered growth potential, there's no shortage of options in the large-cap space.

With that in mind, we asked three Motley Fool contributors to spotlight one of their top large-cap picks for February. Read on to see why they think Procter & Gamble (NYSE:PG), Twitter (NYSE:TWTR), and Take-Two Interactive (NASDAQ:TTWO) have what it takes to outperform the market and reward shareholders.

Check out the latest earnings call transcripts for P&G, Twitter, and Take-Two. 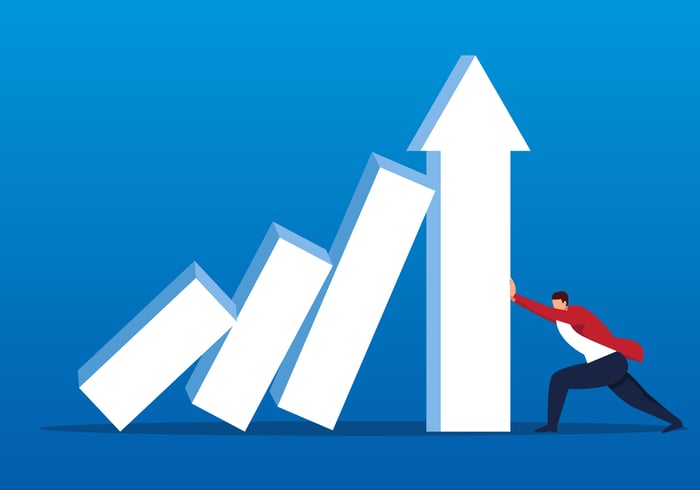 Demitri Kalogeropoulos (Procter & Gamble): It can take lots of time and effort to shift the direction of a business as massive as Procter & Gamble, but the payoff is likely worth the wait. The consumer products giant just turned in its best back-to-back quarterly earnings performances in years, with sales gains of 4% in the fiscal first and second quarters. These boosts came courtesy of a healthy balance of higher volume and increased prices, too, which means P&G is soaking up market share while also passing along rising costs to consumers.

There are weak spots in the portfolio, to be sure, including the Gillette shaving franchise. Investors should also brace for volatility around earnings and sales growth in the coming quarters as P&G continues tweaking its prices to protect both profits and market share.

Yet the business wins seem to be more than offsetting those challenges for now, which is why management recently lifted its growth outlook for only the second time in the last three years. Its prior upgrade, in 2017, was lowered back down in the quarter after it was issued. But P&G's strengthening operating metrics mean there's more reason to have confidence that this latest hike will stand.

After the sell-off comes the rebound

Rich Smith (Twitter): A lot of folks weren't happy with Twitter's Q4 earnings report last week. I'm not one of those people.

Twitter stock is still up slightly since the year began, but has fallen 12% since reporting earnings last week. Mostly, this is because Twitter announced weaker-than-expected sales guidance, and a smaller-than-expected number of monetizable daily active users (mDAU) for its service. But from my perspective, the fact that Twitter is purging fake and bot Twitter accounts from its rolls, and zeroing in on tracking the growth of its most active customers, does two good things.

First, it focuses the company's (and investors') attention on Twitter's most profitable accounts. And second, it resets growth expectations to focus on a much smaller base -- that subset of total accounts, which can now presumably grow at a faster pace.

Now, analysts haven't yet had a chance to reset their expectations for Twitter's growth, and are still calling for Twitter to grow earnings at about 19%. This suggests that Twitter stock at 19 times earnings is only fairly valued at present. If the company ends up growing faster than 19%, however (as I think possible), then the stock could arguably be cheaper than it looks.

That makes right now -- early February and right after the post-earnings sell-off -- a great time to buy Twitter stock.

This winner has been dragged down by other players

Keith Noonan (Take-Two Interactive): Take-Two has been on an impressive run over the last five years, and its stellar business performance continued with its recently published third-quarter report. However, its stock has been punished as the market has taken a more cautious outlook on the video game industry -- a dynamic that gives investors a chance to pour into a company that's putting up great results and has a sagging share price because of challenges that are primarily afflicting its competition.

Publishers like Activision Blizzard and Electronic Arts have been dealing with the fallout from high-profile titles underperforming, but Take-Two's software lineup has actually been putting up laudable performance. A year ago, if you would have told investors that the company's recently released Red Dead Redemption 2 would have shipped 23 million copies roughly 100 days after its release, most would have been elated. To put that in perspective, it wasn't uncommon among industry sales trackers and analysts to project that the game would sell somewhere between 15 million and 20 million copies across its entire lifetime.

The Red Dead sequel now looks to be on track to become one of the most successful games of all time, and it could put up somewhere around half of the business of the company's own Grand Theft Auto V -- the most successful game ever, by many metrics. Take-Two's three core franchises (Grand Theft Auto, Red Dead Redemption, and NBA 2K) are as strong as they've ever been, and the company has another big, triple-A game due for release before April 2020 that could further power the company's earnings growth.

Factor in the company's opportunities in mobile, expansion in international markets, and potential to benefit from trends like esports and mixed reality content over the next decade, and Take-Two stock could be a steal trading at 19 times this year's expected earnings.