With little fanfare, Chipotle Mexican Grill (NYSE:CMG) has quietly become one of the best stocks on the market. The one-time market darling has surged 136% over the past year, making it one of the best performers on the S&P 500 in that time.

Investors have returned to the burrito roller now that it's put the 2015 E. coli crisis behind it, delivered steady growth, and come up with a promising turnaround plan under new CEO Brian Niccol.

While Niccol and company deserve credit for the stock's astronomical rise, it doesn't seem quite right that the stock is already testing levels last seen before the E. coli crisis even though the company is still in the early stages of its recovery. Let's take a closer look. 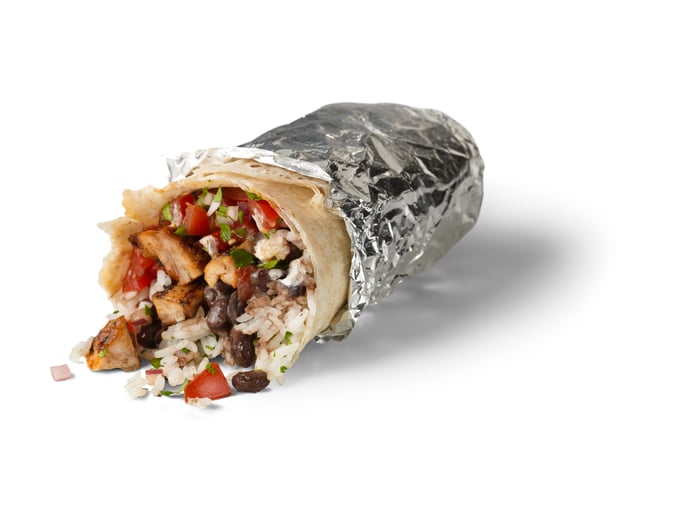 Something doesn't add up

Following the stock's jump after its fourth-quarter earnings report, shares are now trading at a P/E ratio of 66. That's more expensive than the stock was at any point between 2008 and 2015, before the E. coli outbreak sank earnings, which temporarily lifted its P/E.

That compares unfavorably with other restaurant stocks, including McDonald's (NYSE: MCD) at 22 and Starbucks (NASDAQ: SBUX) at 27.8. Investors have given Chipotle such a high valuation because they still believe that its earnings are suppressed from the aftermath of the foodborne illness situations. However, even if Chipotle's profits were as high as they were at its peak, at $16.77 in the last four quarters before the E. coli crisis began, the stock would still be overvalued next to its peers, trading at a P/E of 35.8.

In other words, investors are still treating Chipotle like a growth stock, even though it more closely resembles a mature restaurant company like McDonald's, Starbucks, or any other legacy fast-food chain.

Investors cheered as Chipotle posted 6.1% comparable sales growth in its fourth quarter, its fastest clip in several quarters, and comparable transactions returned to growth, increasing 2%. However, a 2% rise in customer visits is not the stuff that growth stocks are made of, and the majority of its comps growth last quarter was driven by price increases. For 2019, the company sees price increases contributing 1.7% to comparable sales growth.

The market has also been enthused by recent initiatives such as drive-through pick-up points called "Chipotlanes," and a new ad campaign called "Behind the Foil," a series of documentary-style ads from filmmaker Errol Morris that highlights Chipotle's made-from-scratch food prep.

While Chipotle Founder Steve Ells' expertise was in cooking, Niccol, who was the driving force behind Taco Bell sensations such as the Doritos Locos Taco and nacho fries, brings a knack for marketing to the table. So investors should expect more investments in digital sales, experiments like the Chipotlane, and more visible advertising.

However, at this point it seems the stock has gotten ahead of itself, with its valuation well ahead of its peers. Investors are assuming the company will return to its former profitability levels, but Chipotle still has a long way to go. Average restaurant volumes, now at $2 million, are still down more than 20% from their peak in 2015. Even if Chipotle does eventually get back there, costs will be significantly higher, meaning restaurant-level operating margin will probably never return to its heights at 27.2% in 2014. In 2018, restaurant-level operating margin was just 18.7%.  In addition, competitors including upstart fast-casual chain Sweetgreen and legacy brands such as McDonald's have stepped up their game, so it won't be so easy for Chipotle to win back those lost competitors.

Niccol may be the savior Chipotle investors have been waiting for, but that doesn't mean he can walk on queso.