After more than a year of steady declines in transactions, this important metric turned positive in a big way in the fourth quarter.

In recent years, Chipotle Mexican Grill (CMG 3.06%) has done a lot to move beyond the health and public-relations nightmare that followed multiple food-borne-illness events. Furthermore, the burrito and bowl seller had established enough credibility and goodwill with its most loyal customers that it has been able to increase prices substantially, helping drive its comps -- sales at restaurants open at least 12 months -- and profit margins higher over the past year.

However, higher prices have had to do a lot of heavy lifting for Chipotle, since its transactions comps -- a solid proxy for customer traffic -- were negative in the first three quarters of 2018. In other words, Chipotle has had a persistent problem attracting more customers. 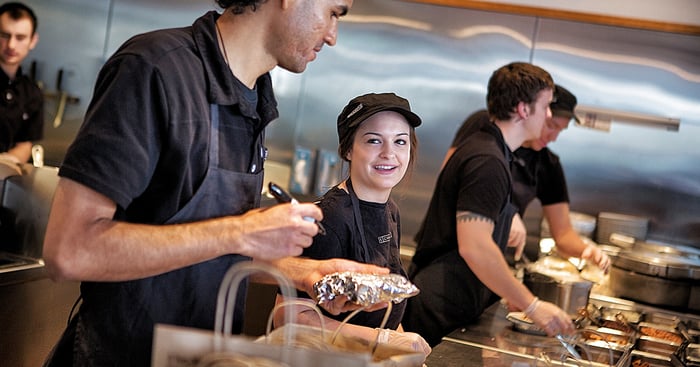 A busy Chipotle is a profitable Chipotle. Image source: Chipotle.

However, it appears that trend has finally been broken. Chipotle's fourth-quarter earnings report, released on Feb. 6, included a fantastic 6.1% comps growth, with 2.2% of that number being -- finally -- increased transactions. Let's take a closer look at Chipotle's full earnings report.

On the basis of generally accepted accounting principles, or GAAP, Chipotle's earnings fell from the year-ago quarter. However, the company also provided non-GAAP adjusted earnings per share, which exclude $6.7 million in non-recurring expenses related to planned restaurant closings and the ongoing restructuring and relocation of its corporate headquarters. When adjusting for these one-off items, essentially all of the benefits of higher prices and traffic, along with improved costs, reached the bottom line.

This really shows in the restaurant-level operating margin, which surged from 14.9% to 17% in the quarter. However, this metric was substantially lower than the 18.7% in the third quarter, 19.7% in the second quarter, or 19.5% in the first quarter of the year.

Drilling down into the details, we see the sequential reduction in restaurant-level margins is entirely due to a big increase in what Chipotle classifies as "other operating costs." These made up 15.5% of sales in the fourth quarter, versus 13.8% or less every other quarter in 2018. Historically, Chipotle has seen this bucket of operating expenses increase in the fourth quarter of the year, so investors probably shouldn't fret about this too much.

A closer look at the increase in comps and traffic

There's no beating around the bush here: The 6.1% increase in fourth-quarter comps was a blowout result. It also marked the company's best comps result in nearly two years, going all the way back to the second quarter of 2017, when Chipotle delivered 8.1% comps growth.

But just as the second quarter of 2017 result came with the caveat that it was "lapping" the horrible 23.6% decline from the 2016 quarter, the just-reported fourth quarter's big 2% traffic improvement and 6.1% total comps improvement had a pretty low hurdle to clear. Last year, comps were up less than 1%, while transactions had declined.

But even with the bar being low, it's a positive for Chipotle that more people ordered more food, and paid higher prices, this quarter than in the year-ago period. Here's why that matters.

In short, growing the transaction count in existing restaurants is one of the best pathways to earnings growth. At a certain level of sales, Chipotle covers its expenses, while still having room to add more sales without increasing certain expenses, including labor, occupancy, and marketing. In other words, higher traffic results in strong incremental margins, where each sale contributes more to the bottom line than the one before.

In other words, it's all about operating leverage, or wringing every ounce of productive capacity out of its existing operating costs.

Management still won't offer concrete guidance on revenue, profits, or cash flows -- not even a loose range. But there's a hint of optimism in what little guidance it does offer. The outlook for comps for 2019 is for "mid-single-digit growth," an improvement from 2018, when the expectation was for "low- to mid-single-digit growth." With much of last year's price increases already surpassed in the comps result, reading the tea leaves indicates that management expects last quarter's traffic bump to continue. Considering traffic went negative the first three quarters of 2018, investors are probably feeling some relief right now.

The company also plans to open between 140 and 155 new restaurants this year, which would be a significant improvement from 2018. The company opened 137 new locations in 2018, but the impact of closures resulted in a net 83 new restaurants added last year.

Put it all together, and Chipotle seems to be hitting a decent stride, at long last. Since Brian Niccol took over as CEO almost one year ago, the company has made a number of operational changes, revamped its marketing strategy, doubled down on food innovation, and undergone some major corporate restructuring.

And this quarter, we finally saw those things bear fruit with the first quarterly traffic increase in well over a year. If Chipotle continues to deliver growth in this key metric, the future should be incredibly bright.