Please ensure Javascript is enabled for purposes of website accessibility
Log In Help Join The Motley Fool
Free Article Join Over 1 Million Premium Members And Get More In-Depth Stock Guidance and Research
By Jason Hall – Updated May 8, 2018 at 11:50AM

Despite a surge in earnings and solid comps growth, the company still has fewer customers coming to its restaurants. New CEO Brian Niccol aims to change that.

April 26 was a great day to be a Chipotle Mexican Grill, Inc. (CMG -0.84%) shareholder. Following the release of the company's first-quarter earnings after market close the day before, Chipotle's stock price surged an incredible 24%, capping a remarkable 69% run since Brian Niccol was named CEO on February 13.

Did the company deliver? In short, yes and no. Sales were up 7.4%, same-store sales (also called comps) increased 2.2%, and earnings per share jumped 33%. But even as profits and sales improved, Chipotle continues to struggle to bring back customers: Comps growth was entirely due to a 4.9% average price increase, and fewer customers ate at Chipotle than in the year-ago quarter.

But Niccol aims to change that, and it looks like Mr. Market is buying into Niccol's vision and expectations that he will deliver the kind of growth results he did as CEO of YUM Brands' Taco Bell unit. Let's take a closer look at Chipotle's quarterly results, as well as what Niccol had to say about his plans to continue turning the company around. 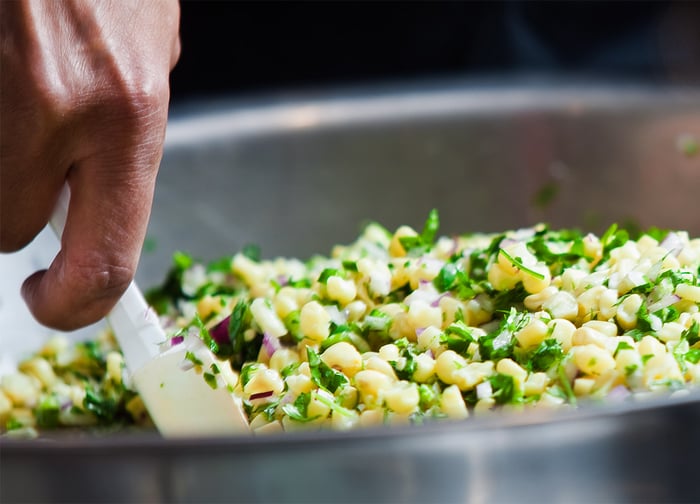 The numbers: Weak traffic still a concern, but some positive trends

Here's a closer look at some key metrics for Chipotle's first quarter:

Labor costs increased from 26.9% of sales last year to 27.8% in the quarter, largely based on higher wages, up about 5% on average. A decrease in food and paper goods costs, timing of some other operating costs, and an average 4.9% price increase more than offset higher labor costs. The end result was Chipotle's restaurant-level operating margins increasing sharply to 19.5%, one of its best quarterly results in the past several years.

Furthermore, the comp result may have been a little bit better than advertised. The "underlying" comp result was actually 2.7%, with a 50 basis point impact from redemptions related to last year's "Chiptopia" promotion. While one could argue that those redemptions were customers who wouldn't have come in without their free burrito coupon, the fact that they did come in is still a positive sign for Chipotle's brand health. The company also continues to get incremental sales from queso; on the earnings call, CFO Jack Hartung said the average check was boosted about 200 basis points by queso orders. Any way you slice it, Chipotle's comp result was an improvement from the two prior quarters, where it didn't manage to get past 1% growth.

The next step? Increasing customer traffic. With a 4.9% price increase and 2.2% comp growth, Chipotle once again served fewer customers than in the year-ago quarter.

Niccol's plans to turn Chipotle around

On the earnings call, Chipotle's new CEO said he viewed Chipotle first as a turnaround opportunity, with longer-term growth goals beyond that. He also identified five things he thinks will lead to success at Chipotle and announced plans to hold a call with investors to provide more detail in the near future:

I plan to share more details with you on a special call before our next earnings announcement with more details around how we will do these five things:

In the coming months, you will see us piloting various tests across key innovation-focus areas such as consumer access, the digital experience, our menu, and restaurant experience in realigning the organization to support the go-forward strategy.

One of Niccol's first major moves was to hire Chris Brandt as Chief Marketing Officer on March 20, taking him from Bloomin' Brands,where he was in a similar position. Niccol and Brant had worked together at Taco Bell on many of that company's successful product and marketing campaigns, so many investors have high hopes that those past successes will carry over to Chipotle.

Looking ahead: Holding firm on expectations, setting aside more for stock buybacks

Niccol and team held firm on their expectations for 2018 new store openings and comp sales, reaffirming the same guidance for 130 to 150 new locations and low-single-digit comps growth for the full year.

However, they did have to revise the expected full-year effective tax rate up to 32.5% to 33.5%, due to expectations based on stock-based compensation that won't be awarded. The company treats the issued equity as an expense and carries this future write-off on the balance sheet as a deferred tax asset, but since it likely won't award all of the equity grants thanks to the company's poor stock price performance in recent quarters, it will be forced to write off some of those deferred tax assets, and its effective tax rate will increase as a result. This is why its effective tax rate was 36.9% in the first quarter.

However, the second-quarter and third-quarter tax rates should be around 29%, before increasing to as high as 38.5% in the fourth quarter, when its next round of stock-based compensation awards are issued. Of course, the equity awards and related deferred tax assets are non-cash, so Chipotle's balance sheet will not be materially harmed by this.

With over $500 million in cash and investments and no debt, the company has a lot of liquidity to deploy, so the board approved an additional $100 million toward share buybacks. That gives the company about $150 million it can deploy to repurchase shares if it so chooses. Over the past three years, Chipotle has bought back almost 11% of its shares.

Now, Niccol and Co. are tasked with accomplishing what founder and former CEO -- now executive chairman -- Steve Ells couldn't: get customers to return in the kinds of numbers as before the food-borne illness events of 2015. If they can pull it off, Chipotle's unit economics should deliver enormous profit growth from here. It won't happen overnight, and it's going to take even more patience from investors to give him a chance.