Amarin and Aphria could both be bought out soon.

The healthcare sector has a well-earned reputation for ultra-pricey acquisitions. In 2017, for example, Gilead Sciences paid nearly $12 billion for Kite Pharma and its commercially unproven cell therapy platform. Kicking off this year, Bristol-Myers Squibb struck a $74 billion deal to acquire biotech heavyweight Celgene. As both of these deals came at sky-high premiums, many shareholders walked away with sizable windfalls in an exceedingly short period of time, underscoring the widespread interest among investors in healthcare merger-and-acquisition activity.

That said, a buyout scenario should never be a primary reason to buy any healthcare stock, as there are far too many things that can go wrong before a deal is consummated. Buyout rumors, though, are often fueled by a company's improving fundamentals -- and that is a solid reason to consider buying a stock. 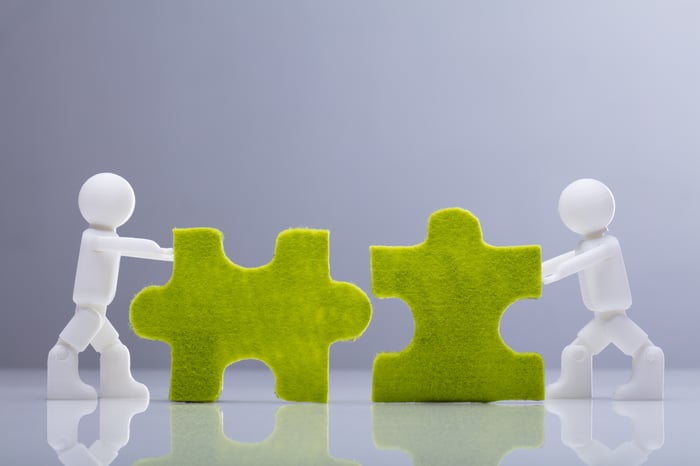 For instance, cardiovascular-care company Amarin (AMRN 2.75%)and the Canadian marijuana titan Aphria (APHA)have both been percolating to the top of the buyout rumor mill this year because of their outstanding long-term growth prospects. Armed with this insight, let's consider whether investors should take a flier on these two red-hot buyout candidates.

A major advancement in cardiovascular care

Irish biopharma Amarin has repeatedly been linked to buyout speculation ever since the company's prescription fish-oil pill, Vascepa, hit the mark in the Reduce-It cardiovascular outcomes trial late last year. The underlying reason is that these unprecedented trial results for an omega-3 treatment could open up a far larger commercial opportunity for the drug.

What does this proposed label expansion mean from a dollars-and-cents standpoint? Given that a whopping 38 million Americans take statins, Vascepa could achieve blockbuster sales status -- in excess of $1 billion per year -- by capturing only a small fraction of this vast patient population.

Going one step further, Vascepa may even be able to generate somewhere between $20 billion and $30 billion over the course of its life cycle with this high-value label expansion in hand. This prescription omega-3 treatment could thus end up breaking into the top 50 best-selling drugs in the world in the next decade.

All that said, Vascepa still needs to pass its upcoming regulatory review with the FDA to unlock its full commercial potential. Amarin, therefore, may have to wait until this key regulatory risk is off the table before any suitor is willing to pay top dollar. As such, potential investors should arguably view a takeover as only icing on the cake, and not as a primary reason to buy this promising biopharma stock this year.

Speaking of buyouts, Aphria has already fetched one hostile takeover bid from Green Growth Brands this year. While the Canadian pot magnate deemed Green Growth's offer "inadequate" and said it "significantly undervalues the company," the bigger point is that Aphria clearly has a target on its back now.

Why? Aphria is an attractive buyout candidate for three reasons:

The bottom line is that Aphria has the economy of scale necessary to compete with the top dogs in the industry, as well as a rock-bottom valuation that may prove too tempting to blue-chip companies looking for an entry point into the high-flying cannabis space.

In fact, Aphria now has strong ties to distilled-spirit and beer giant Diageo through the addition of Tom Looney and Jakob Ripshtein to its management team. That's not to say these key executive hires will definitely lead to a partnership or a tender offer from the beverage maker, but Diageo has openly admitted that it is considering a joint venture involving cannabis. And Aphria, in many ways, would make a nice addition to the beverage giant's portfolio.

Regardless of how this takeover speculation pans out, however, Aphria's shares should keep bounding higher now that its Latin American scandal and Green Growth's lowball offer are squarely in the rearview mirror. Growth investors, in kind, may want to buy some shares of the red-hot pot stock before the company's valuation begins to track closer to the industry's sky-high average.