Loan losses are near historical lows, but how much longer can the good days continue?

When the largest U.S. banks -- Bank of America, Wells Fargo, and JPMorgan Chase -- reported fourth-quarter earnings, all of them had one thing in common: They had smaller reserves set aside for bad loans at the end of 2018 than at the end of 2017.

Having gutted their loan books of bad risks following the financial crisis, banks of all sizes have enjoyed a multiyear period in which very few loans have gone bad. That's allowed the industry to slowly walk down the amounts they set aside for problematic loans, boosting their earnings in the present. That trend could soon reverse course, weighing on profits as loan losses tick up and provisions take a bite out of bank earnings. 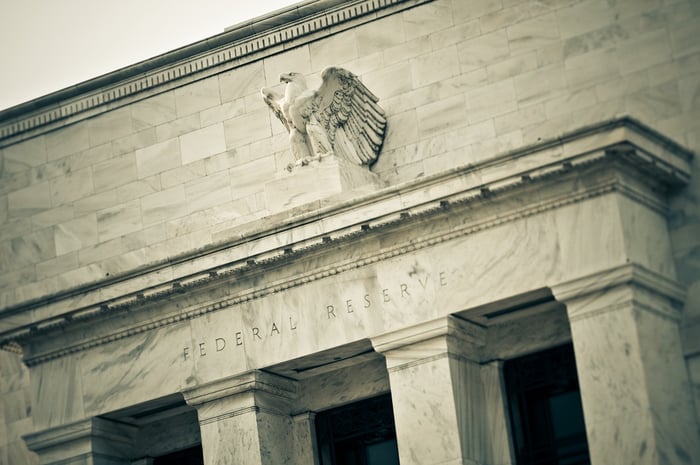 Big banks are setting aside less for bad loans

Banks set aside money for loan losses by taking provisions every quarter. The provision on the income statement flows into the "allowance for loan losses" on the balance sheet. When a bank incurs a bad loan, the resulting losses are charged against the allowance.

Think of this as a bathtub. Provisions are the faucet. Allowances for loan losses are the water in the tub. Net charge-offs are the drain. In recent years, the drain (loan losses) is taking more water from the tub (allowances) than the faucet (provisions) is adding to it. That's helping banks report higher profits, as their provisions aren't keeping pace with charge-offs.

At the margin, lower allowances for loan losses have been a boon to bank stocks because they are relying on past provisions to cover current losses. Across the industry, allowances have declined to near-historical lows, falling to 1.22% of all loans outstanding in the third quarter of 2018, the last quarter for which data is available from the Federal Reserve. 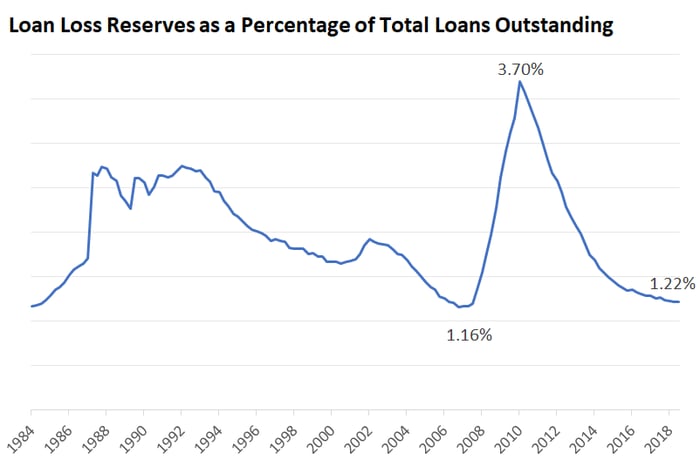 I'm not here to argue that bank loan books are toxic. If anything, banks have become boring. Gone are the days of high-risk mortgages, never-ending home equity loans, and credit cards for anyone with a pulse. Loans to commercial businesses are about as safe as they have ever been, too. 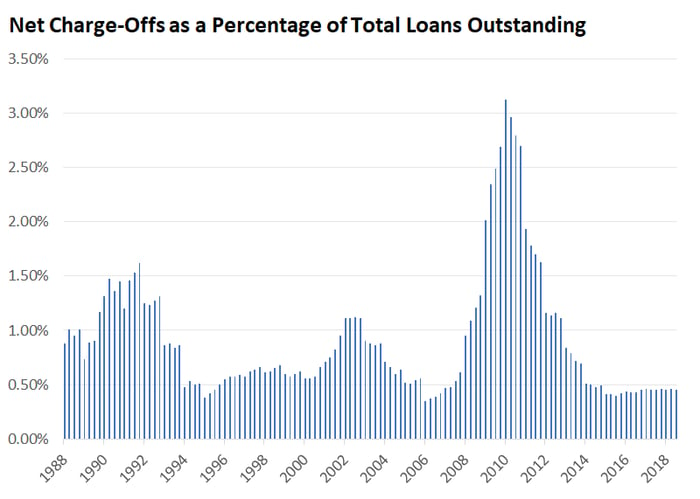 You don't need to forecast a truly dismal economic outlook for credit costs to rise. Even the most minor of economic recessions would be enough to send loan losses rising. Note that during the "forgotten" recession of the early 2000s, net charge-offs doubled from years earlier.

Reversion to the mean

At some point, credit performance will change for the worse. Unemployment will rise, business investment will slow, and loan losses will tick up again. At that point, banks will have to provision more, not less, than they're charging off each quarter to build up reserves against losses. This shift from shrinking allowances to increasing allowances will weigh on the earnings power of the industry.

For what it's worth, Bank of America has recently seen net charge-offs tally to about 0.4% of its loan book, though its CEO, Brian Moynihan, has indicated that he thinks a "normalized" loss rate throughout a full cycle should be around 0.9% of loans at his institution. Bank of America, by that measure, is doing far better today than Moynihan's view of its performance over a full economic cycle.

These small differences are not trivial. Given that a "good enough" result for the banking industry is a pre-tax return on assets of 1.25%, there are no rounding errors in the banking industry. It's not a reason to dump your bank stocks, but you should understand that the industry's performance in 2018 was likely better than the average result you should expect over the next five years.