Shares of Clean Energy Fuels Corp. (NASDAQ:CLNE) are up 11.5% at 12:50 p.m. EST on Feb. 20 on very heavy trading volume. More shares of the company have already traded hands today than in an average full trading day over the past few months.

If there's one thing behind today's surge, it's likely the company's early-morning press release, touting nearly a dozen new agreements and extensions to supply natural gas to transportation companies. In total, these agreements represent more than 6 million gallon-equivalents of natural gas that Clean Energy will sell to these companies each year.

Over the past year, the public narrative around natural gas as a viable transportation fuel has shifted, along with expectations that electric and hydrogen-powered vehicles would be the future. While there's some truth to that over the long term, the reality is that neither technology is nearly as viable today -- or likely will be for a number of years to come -- for many applications, including heavy trucking, waste hauling, and many public-transit needs. 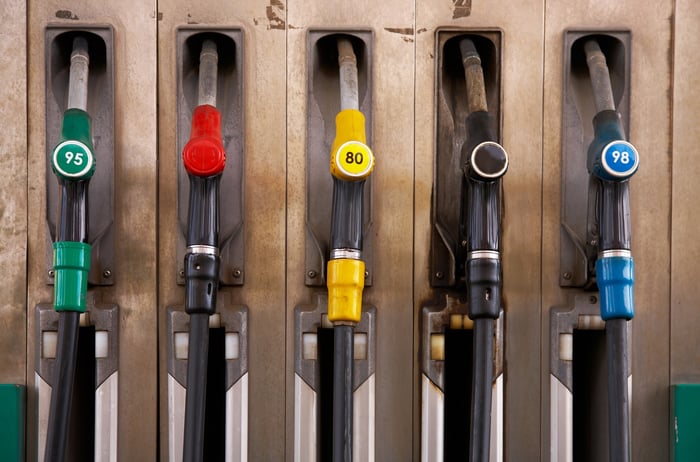 Also highlighted in the announcement was continued growth in sales of Redeem, Clean Energy's brand of renewable natural gas. Sales of Redeem represent about half of the 6 million gallon-equivalents of fuel sales that the company announced in the release. Renewable natural gas offers a very attractive emissions profile for shippers, since it recaptures harmful methane from landfills and farming activities, and can actually result in fewer net emissions than an electric vehicle charging from a utility generating power with coal.

While today's big jump is nice, it's also a painful reminder of how far Clean Energy's stock price has fallen since peaking last summer. Since the peak, its share price is still down more than 40%, and frankly, looks like an excellent risk-reward profile today.

The company is now cash flow positive after steadily cutting operating costs in recent years, while also paying off a substantial amount of debt. At the end of last quarter it held more cash than debt on its balance sheet, and management committed to paying off a substantial amount of its remaining debt before the end of 2019, further reducing its expenses.

And as today's press release demonstrates, the company is still growing fuel sales to transportation customers, so it's not just cost-cutting that's helping the company improve its results. But today's release was just a teaser: Tune back in for a deep dive into the company's fourth-quarter results in mid-March.