The adhesive-dispensing systems company started fiscal 2019 on a slow note. Here's what investors need to know.

Nordson ( NDSN 1.54% ) announced fiscal first-quarter 2019 results on Wednesday after the market closed, detailing an expected revenue decline -- and a more pronounced drop in earnings -- against a tough comparison to the exceptional organic growth it achieved in the same year-ago period.

With shares down around 2.7% on Thursday in response, let's dig deeper into how the adhesive-dispensing systems company kicked off its new year. 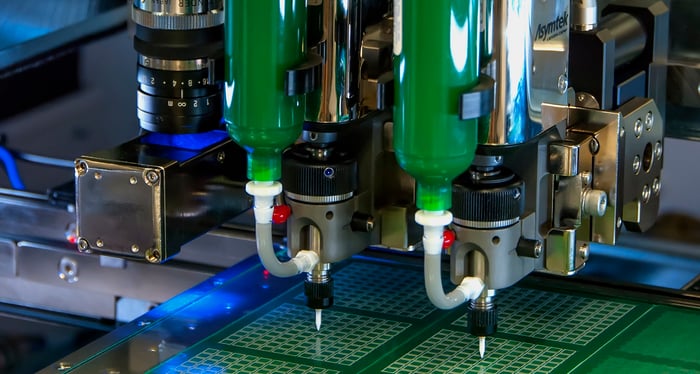 "Given the difficult comparisons to the strong first quarter of fiscal 2018, where total company organic sales growth was 19 percent, this quarter's performance was in line with our expectations for a more typical seasonal pattern of sequential quarterly sales growth," stated Nordson CEO Michael Hilton. "As our spending is generally consistent throughout the year, segment operating margins in the quarter were impacted by the decline in sales."

For the full fiscal-year 2019 -- and with the caveat that Nordson is continuing to "monitor macroeconomic challenges, as well as the resolution of the international tariff legislation" -- the company reiterated its guidance for organic sales volume growth of 3% to 5%. Nordson further reaffirmed its targets for fiscal 2019 adjusted operating margin and adjusted EBITDA margin to expand by 100 to 150 basis points year over year.

In the end, however unimpressive Nordson's headline numbers appeared, this marked an uneventful performance against a difficult comparison for the company. But given its bottom-line shortfall relative to expectations as its sales decline translated to lost operating leverage, it's no surprise to see Nordson stock down modestly today in response.