The idea of a subscription-based version of Facebook (META -1.19%) isn't new. Various hoaxes have gone viral over the years, and the company has clearly thought about offering such a service, particularly over the past couple of years as the social networking giant has found itself embroiled in an endless string of controversies and scandals around data privacy. CEO Mark Zuckerberg told Congress last April that there "will always be a version of Facebook that is free," implying that one day perhaps there would be a version that isn't. COO Sheryl Sandberg had said just days prior to Zuckerberg's testimony that allowing users to opt out of targeted advertising would be "a paid product."

Implementing an ad-free version of Facebook sounds like it should be a simple task for a company as large as Facebook, but the reality is much more complex. 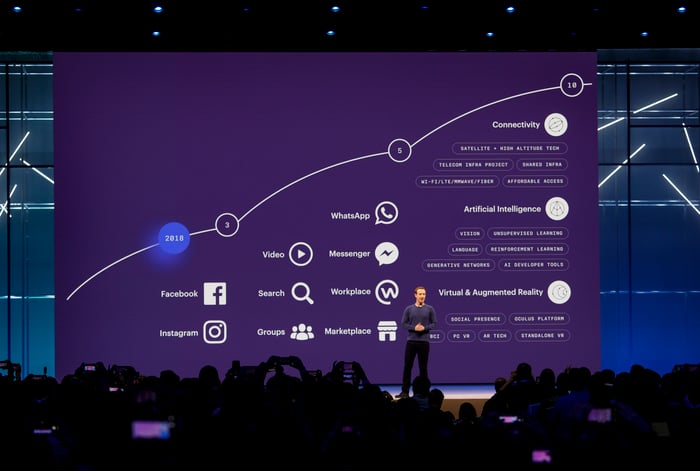 A conversation with Zuck

Zuckerberg sat down with Harvard professor Jonathan Zittrain for a nearly two-hour conversation earlier this week to discuss a wide range of topics. The notion of a subscription-based ad-free tier came up yet again, but this time His Zuckness gave the most detailed explanation to date of why Facebook hasn't introduced such a service. The most important aspect to acknowledge is the difference between ads and the data that Facebook collects to target those ads. Getting rid of one doesn't necessarily mean getting rid of the other.

When people have questions about the ad model on Facebook, I don't think the questions are just about the ad model. I think they're about both seeing ads and data use around ads. So when I think about this, I don't just think you want to let people pay to not see ads, because I actually think then the question is -- the questions are around ads and data use and I don't think people are going to be that psyched about not seeing ads but then not having different controls over how their data is used. OK, but now you start getting into a principle question, which is are we going to let people pay to have different controls on data use than other people? And my answer to that is a hard no.

The chief executive then brought up the "Clear History" feature that Facebook is working on, which has been delayed quite a bit, as the project has been more technically challenging than the company initially thought it would be. Clear History allows users to dissociate browsing data and Facebook history from their profiles by anonymizing the data. The privacy tool gives users a bit more control over their data, which Zuckerberg considers a "prerequisite" for any type of subscription product.

"As a principled matter, we are not going to just offer a control like that to people who can pay," Zuck said. "If we're going to give controls over data use, we're going to do that for everyone in the community."

Still, Zuckerberg doesn't rule out the possibility of an ad-free subscription service in the future, at least once those controls are in place:

The philosophical downstream question of whether you also let people pay to not have ads... there are a bunch of questions around whether that's actually a good thing, but I personally don't believe that very many people would like to pay to not have ads. All of the research that we have -- it may still end up being the right thing to offer that as a choice down the line -- but all the data that I've seen suggests that the vast, vast, vast majority of people want a free service.

Zuck then rightly points out that many ads do provide value to users, such as when a local business offers a promotion. More than ever before, people are increasingly aware of the privacy costs associated with free online services. Facebook generated roughly $110 in advertising revenue per North American user last year, so the company would have to charge them around $9.15 per month to offset that monetization. (Other geographies generate much less.)

While some fraction of users would happily pay to remove ads, Facebook's data collection engine would keep chugging along. For now, until more robust data controls are put in place, the only way to keep Facebook from vacuuming up all your data is to stop using its services.