Please ensure Javascript is enabled for purposes of website accessibility
Log In Help Join The Motley Fool
Free Article Join Over 1 Million Premium Members And Get More In-Depth Stock Guidance and Research
By Matthew Cochrane – Updated Apr 11, 2019 at 9:48AM

MercadoLibre and Alibaba Holdings operate worlds apart from each other, yet both face enormous opportunities -- and risks.

American investors are often accused of ignoring global opportunities while limiting their investment horizons to the East and West coasts of the United States. While most people should probably have the majority of their portfolios in domestic companies, that doesn't mean investors should categorically exclude international companies, especially when they exhibit the same characteristics that investors look for in equities closer to home.

Two such companies investors might want to consider for their own portfolios are Alibaba Group Holding (BABA -2.37%) and MercadoLibre (MELI -4.12%). What makes this comparison particularly interesting is that both companies face similar risks and opportunities. For instance, both companies operate in growing geographic markets featuring a quickly-expanding middle class, and both have branched out from e-commerce into payments, fintech, and other areas to substantially boost their total addressable markets and revenue. Both companies also face a number of questions centered on legitimate geopolitical concerns.

Let's take a closer look at each to see which might make for a better investment today. 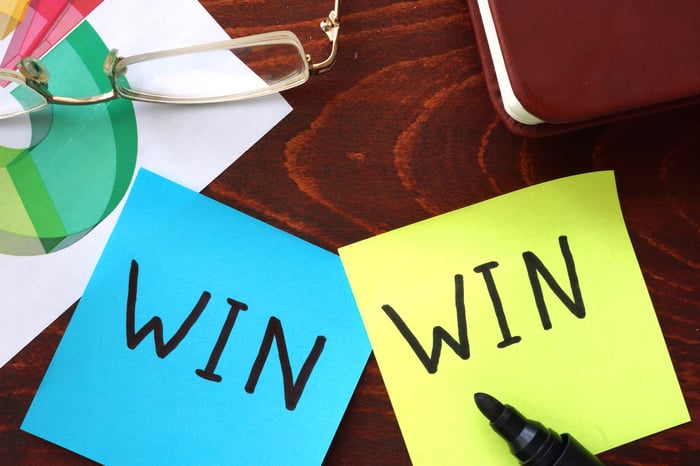 Both Alibaba and MercadoLibre have enormous market opportunities ahead of them, yet face tremendous geopolitical pressures. Image source: Getty Images.

The case for MercadoLibre

MercadoLibre is a South American e-commerce powerhouse that "hosts the largest online commerce and payments ecosystem in Latin America." The ecosystem is growing, and now includes an online marketplace where third-party sellers can list items for sale, a digital payments platform, online classified ads, a growing advertising platform, and a logistics and delivery platform finding increasing traction among its merchant base. In Argentina, one of the many Latin American markets in which it operates, it has even started an asset management business.

Nearly all of Mercado's many business segments are showing tremendous growth. (Note: all numbers on a foreign currency neutral basis) In the company's 2018 third quarter, revenue rose to $355.3 million, a 58.3% increase year-over-year. Gross merchandise volume, the value of the items sold across its platform, grew to $3 billion, a 27.9% increase over 2017's third quarter. The number of products it sold increased 12.5% to 83.5 million.

MercadoPago, its digital payments platform, grew total payment volume to $4.6 billion, a 69.5% year-over-year increase, while the number of transactions rose to 103.9 million, 66.7% above the prior-year period.

While MercadoLibre is having no problem growing, its profits have taken a hit the past year as a number of factors have weighed on margins. Chief among these were heavy shipping subsidies so buyers are able to pay less for shipping.

The company is also seeing increased competition, including an increased interest from Amazon.com (NASDAQ: AMZN) in Brazil. Mercado is also still stinging from deconsolidating its operations in Venezuela due to the political turmoil in the country.

Alibaba controls 58.2% of the e-commerce market in China, more than three times the market share of second-place JD.com, according to eMarketer. This dominance perfectly positions the company to take advantage of two huge macro trends. First, consumption by China's middle-class is expected to increase from $4.2 trillion in 2015 to $14.3 trillion by 2030, according to the Brookings Institution, a public policy organization.

Second, much of this middle-class spending growth will occur in online transactions. In 2017, across 34 consumer goods categories, China's e-commerce sales grew by 27%, compared to just 6% growth across the same categories in offline sales, according to Nielsen.

Alibaba's growth comes with the numbers you would expect from such a well-positioned company, and in 2015, the company ended the fiscal year with about $12.3 billion in revenue. When the company reported its results for the full 2018 fiscal year, that number grew to almost $40 billion, a 225% increase in three years. Over the same time period, the company's annual active buyers grew from 350 million to 552 million, a 58% increase.

The numbers paint the picture accurately: Alibaba is the perfect company (the largest e-commerce company) in the perfect country (the world's most populous country) at the perfect time (as middle-class spending and e-commerce are set to take off). It's hard to imagine a better setup than this. Nevertheless, trade war fears and a slowing Chinese economy have weighed on the stock price in the past year, as shares have declined more than 11%.

Both of these companies face risks, largely due to the geopolitical climates of the markets in which they operate. That said, they both have enormous opportunities in front of them, and savvy investors could disagree about the risk-reward each offers. MercadoLibre, with a market cap of "only" $16.4 billion, is small in comparison with Alibaba, which sports a market cap of $431 billion -- more than 25 times Mercado's size. The Chinese market is also much larger than the collective markets Mercado serves.

Check out the latest Alibaba and MercadoLibre earnings call transcripts.

Yet, while Mercado probably has more upside, simply due to its much smaller size, I would choose -- and have -- Alibaba for my portfolio. China's stricter trade regulations, even if a trade agreement is reached soon, has allowed Alibaba to gain a huge head start over foreign rivals that might enter the country someday, such as Amazon. Meanwhile, Amazon is already moving into many of MercadoLibre's markets. When in doubt, it's probably best to choose the company that doesn't have to compete against Amazon head-to-head.