Storm clouds are forming, and UBS just did a U-turn on Caterpillar stock.

Up until yesterday, UBS was Caterpillar (CAT 0.30%) stock's biggest fan -- but no longer. This morning, the Swiss megabanker announced it is reversing course on the heavy equipment maker and cutting its rating on the stock all the way from buy to sell.

Caterpillar shares are down more than 2% in response. Here's what you need to know. 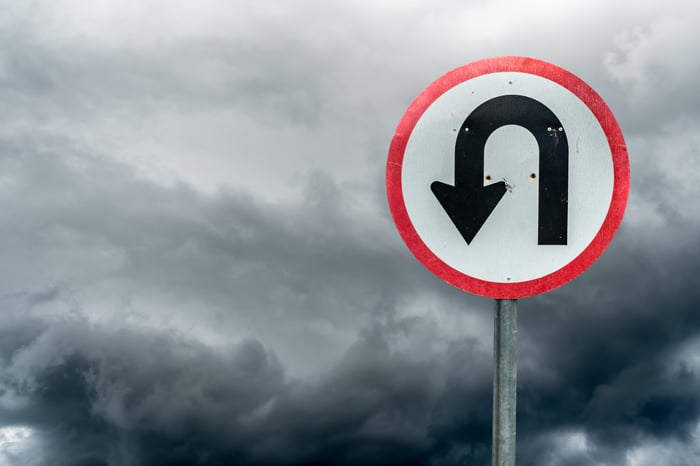 UBS was for Caterpillar...

UBS' support for Caterpillar stock dates to September 2017, when the analyst cited the company's massive free cash flow (what the analyst called Caterpillar's "underappreciated" "cash story") as its reason for rating the stock a buy and assigning it a $140 price target. Updates from StreetInsider.com (subscription required) show that over the following 18 months, UBS raised this price target twice -- first to $155 in December 2017, citing strength in construction and oil and gas, and later to $185 in June 2018, when UBS predicted Caterpillar's mining business would soon ramp up.

...before UBS was against it

But UBS doesn't seem so sure about that anymore. In fact, with Caterpillar stock costing $137 on the open market, but UBS valuing the shares at just $125 today, it kind of sounds like the analyst thinks Caterpillar's run is done.

In this morning's note, UBS observes that the mining story for Caterpillar is still going strong, but warns that the company is experiencing "headwinds in construction and oil & gas." The analyst believes sales in more than half of Caterpillar's end markets will "peak" this year, and begin declining as early as 2020, squeezing Caterpillar's profit margins and drying up its revenue. As a result, UBS now predicts that earnings per share will decline 8% year over year in 2020 -- despite the company buying back stock in an attempt to stabilize earnings per share.

This is a huge turnaround in sentiment for UBS, which previously had believed Caterpillar would continue growing profits into 2020 and 2021. Reworking its math to incorporate its new pessimism on revenue and margins, the analyst is cutting its earnings estimates for the company by 18% in 2020 and 22% in 2021.

Let's look at the valuation. At a market capitalization of $79.5 billion currently, Caterpillar sells for a bit less than 13 times trailing earnings, which doesn't seem a particularly high valuation -- especially not with the company paying a 2.4% dividend yield, and with most analysts arguing it will grow earnings 15.5% a year over the next five years (according to S&P Global Market Intelligence).

But here's the thing: The U.S. Commerce Department just reported that the number of new homes under construction declined in December to its lowest level since 2016, which certainly doesn't bode well for Caterpillar's construction business. Nor does the fact that the S&P CoreLogic Case-Shiller U.S. National Home Price Index is showing home price growth slowed in December, to 4.7% over the past year -- the slowest rate we've seen since August 2015.

Taken together, those two data points suggest that UBS may be on the right track in predicting a decline for Caterpillar next year.

And here's another: According to S&P Global data, Caterpillar generated only $3.6 billion in positive free cash flow last year. That was just 6% better than it did in 2017. Moreover, Caterpillar's FCF number was more than 40% weaker than the $6.1 billion the company claimed in GAAP earnings for 2018, which suggests the company's quality of earnings may be deteriorating as well.

Valued on its free cash flow rather than its GAAP earnings, Caterpillar stock now sells for a multiple of 22, which looks expensive to me even if analysts (other than UBS) are right about the company's ability to grow profits at 15.5%. And if it's UBS that is right, and everybody else is wrong?