Tupperware's stock fell over 20% after its recent earnings miss. The company has announced a turnaround plan, but will it succeed?

Tupperware (TUP -3.36%) reported its fourth-quarter 2018 earnings on Jan. 30, and surprised investors with weak financial performance and a 60% dividend cut. The company's stock price dived over 27% in the day following the announcement and is down nearly 40% in the past year. 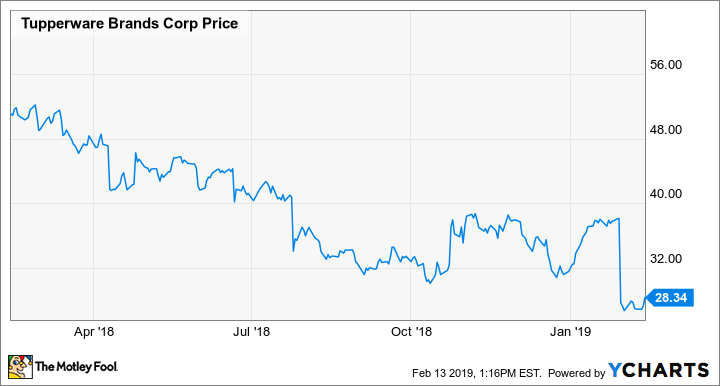 Could Tupperware's depressed stock price be a buying opportunity? Or is the dividend cut a signal that management sees more pain ahead? Perhaps both statements are true.

What drove the recent earnings miss?

A strong US dollar hurts Tupperware's earnings because over 90% of the company's sales are generated outside of the United States, and Tupperware reports its financials in terms of US dollars. The reported dollar amount of revenue and earnings are worth less in US dollar terms if the foreign exchange rate in places where Tupperware operates becomes relatively weaker vs. the US dollar. This negative impact from currency exchange rates explains half of the recent quarter's revenue decline.

Another headwind for Tupperware has been weakness in emerging market economies. 67% of Tupperware's sales are generated in emerging market countries such as India, China, Mexico, and Brazil. Historically these countries have spurred growth for the company, but today these markets are suffering due to a whole host of issues. In the recent quarter, Tupperware saw its sales in Asia decline 16% and its sales in South America decline 22%.

However, not all of Tupperware's problems can be blamed on external economic forces. The company saw its salesforce decline 5% last year. Tupperware has a direct-to-consumer business model whereby an independent salesforce distributes the company's products directly to retailers and consumers. Tupperware is dependent on its direct salesforce to sell its products and a decline in the number of sales people translates to lower product sales.

There is no doubt that the Q4 earnings report was disappointing, but much of the negative drivers were due to economic factors that are out of the company's control. These economic headwinds could abate or even reverse in the future. Also, shareholders may be happy to hear that the company has a plan to address the company specific issues.

Tupperware's turnaround plan is propelled by the dividend cut. Tupperware cut its dividend from $0.68 per share to $0.27 per share, a 60% reduction. This reduction saves the company $80 million per year in cash which it plans to invest back into the business.

On the Q4 2018 earnings call, management announced a plan to invest $100 million over the next 3 years in efforts to grow sales and reduce costs. Specifically, the company wants to deploy technology that will help improve the productivity of its salesforce by spending less time on logistical and administrative duties and more time focused on speaking to customers. Furthermore, Tupperware is streamlining its organizational structure and compensation so that there are fewer layers of management and salespeople are better incentivized. The company noted that a reduction in management headcount would result in $50 million in annual cost savings beginning in 2020.

Tupperware has suffered a decline in its salesforce headcount over the past year which has translated into a decline in revenue. Because Tupperware uses a direct-to-customer salesforce, the company must constantly work toward recruiting and retaining productive salespeople for the business to thrive. The company believes that the investments it plans to make over the next 3 years will improve the size and the productivity of the salesforce, helping to drive revenue growth.

Tupperware's turnaround plan appears very sensible. The big question mark is execution. If the changes being made do not result in a better salesforce headcount and improved productivity, then the company may need to explore a deeper rethink of the brand or business model.

In addition to the cost cuts and growth investments announced, Tupperware will be allocating the remaining savings from its reduced dividend payments to paying down debt and opportunistically repurchasing shares.

Tupperware carries $888.9 million in total debt and reported 2018 adjusted EBITDA of $351.6 million. EBITDA is a measure of earnings before interest expense, taxes, depreciation, and amortization. EBITDA is the measure of earnings most commonly used for assessing leverage because it shows a company's capacity to service interest payments. Taking the ratio of debt to EBITDA shows the company has a leverage ratio of 2.53x.

While Tupperware does not have an unsustainable level of indebtedness, leverage could become a more serious problem if earnings continue to decline. The company is targeting a leverage ratio below 2.0x over the next couple years. With $149 million in cash on its balance sheet and over $125 million in cash flow expected for 2019, reducing leverage likely won't be a Herculean task.

Sacrificing dividends for a stronger balance sheet is a bitter pill to swallow for shareholders. However, shoring up the balance sheeting and shifting to a more flexible capital return policy will protect the company ahead of the next economic downturn.

The depressed stock price and dividend cut have rattled Tupperware's shareholders. However, there is a silver lining to the story.

Much of the weak financial performance over the past quarter and year can be attributed to macroeconomic forces which may abate or even reverse in the future. The company specific issues are fixable, and Tupperware has taken major steps to address the problems.

The dividend cut is a red flag to the market, but it provides the company with the flexibility it needs to turnaround the company and improve its balance sheet. Despite the dividend cut, the stock still yields nearly 4%, which could be attractive to prospective investors.

The deciding factor in the fate of Tupperware's stock will be execution. The company has reset expectations and laid out a viable recovery plan. It will be important to see how the company executes against that plan over the next year to determine if the turnaround will be successful or if greater changes will need to be made.