Investors have struggled to get a handle on what to expect from regional department store chain Dillard's (DDS -1.51%) in recent years. The family-managed business is infamously secretive: It doesn't hold earnings calls, and it doesn't provide guidance for sales and earnings.

Meanwhile, the disruption sweeping across the U.S. retail industry has led to volatile earnings results. As a result, the stock has swung between huge gains and huge losses. For example, Dillard's stock plunged after the company's earnings reports for the second and third quarters of fiscal 2018 due to reporting a loss and missing analysts' earnings estimates by more than 50%, respectively.

This week, Dillard's stock is on the rise again. In fact, shares jumped as much as 23% in morning trading on Tuesday after the company reported better-than-expected fourth-quarter results. 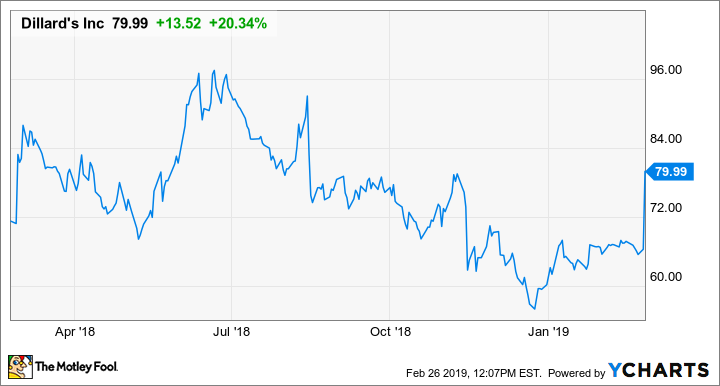 A solid end to the year

Dillard's stock plunged to a 52-week low during the December 2018 market sell-off after the company reported disappointing third-quarter results a month earlier. Subpar holiday sales updates at Macy's (M -1.66%) and other department stores limited the stock's January rebound. (Of course, Dillard's didn't provide a sales update, so investors just assumed that it faced trends similar to those affecting Macy's and other peers.)

However, on Monday afternoon, Dillard's revealed that it outperformed its rivals during the final quarter of fiscal 2018. Comparable-store sales rose about 2%, outpacing the analyst consensus of 0.5% growth. That also exceeded Macy's 0.7% comp sales gain by a wide margin. Dillard's noted that the home and furniture categories had the strongest sales trends, with cosmetics and men's clothing and accessories also outperforming the company average.

There were still some flaws in Dillard's performance. Retail gross margin slipped to 30.3% last quarter from 31% a year earlier. This was partially offset by good expense control. Retail operating expenses improved to 23.2% of sales in Q4 from 23.6% of sales in the prior-year period. The net result was that Dillard's pre-tax income declined a little more than 10% to $103.8 million last quarter. However, adjusted net income grew 6% to $85.1 million, thanks to the impact of federal tax reform. Adjusted earnings per share rose 14% to $3.22, buoyed by share repurchases. Analysts had expected adjusted EPS of just $2.76.

While Dillard's fourth-quarter earnings results came in ahead of expectations, its pre-tax income still declined on a year-over-year basis, both for the fourth quarter and for the full year. Thus, the earnings report hardly proved that Dillard's is completely healthy.

Nevertheless, Dillard's stock skyrocketed more than 20% on Tuesday. This points to a short squeeze. Members of the founding family hold a significant proportion of the company's shares, and of the remaining shares -- the "float" in investor parlance -- nearly 60% had been borrowed and sold by short-sellers as of the end of January. With the stock price flying higher, many of these short-sellers are now racing to buy Dillard's stock so they can cover their short positions and cut their losses.

As of 2 p.m. EST on Tuesday, about 2.5 million shares of Dillard's stock had changed hands. For comparison, the average full-day trading volume over the past three months has been around 400,000 shares. There were nearly 7 million shares sold short as of the end of January, so the ongoing short squeeze could continue for the rest of this week.

Dillard's stock now trades for about 13 times trailing earnings, a substantial premium to Macy's shares. That can be explained partly by the company's superior balance sheet. Still, investors appear to be counting on EPS growth from Dillard's going forward.

However, Dillard's ended fiscal 2018 with inventory up 4% year over year. That could lead to even greater gross margin pressure in the first half of fiscal 2019, as the company will need to clear out this inventory to make room for fresh merchandise.

Additionally, while operating cash flow improved to $367 million in fiscal 2018 from $274 million a year earlier, it remains far below the highs reached a few years ago. (Annual operating cash flow averaged $526 million between fiscal 2014 and fiscal 2016.) The decline in cash flow has forced Dillard's to cut back on share repurchases, which have been a key EPS growth driver for the company over the past decade.

Since Dillard's doesn't provide sales and earnings forecasts, investors can only guess at how these factors may impact the company's results in 2019. Given this uncertainty, investors should probably stay on the sidelines unless the stock falls back to a cheaper valuation.