Here's an overlooked reason why a Wabco takeover by ZF Friedrichshafen could make sense.

Shares of WABCO Holdings (WBC), a leading global supplier of braking control systems and other technology solutions for improving efficiency and safety in commercial vehicles, jumped as high as 15% Wednesday afternoon, after takeover rumors swirled.

German car-parts manufacturer ZF Friedrichshafen was reportedly considering a takeover of U.S. competitor WABCO, according to German business newspaper Handelsblatt. A ZF Friedrichshafen spokesperson, however, responded that "ZF regularly reviews strategic options for action, including acquisitions, but there is no decision in this direction," according to Reuters.

A buyout would follow a rough 2018, when WABCO shed a quarter of its value amid fears that the global commercial vehicle cycle had peaked. The near-term business outlook remains gloomy. 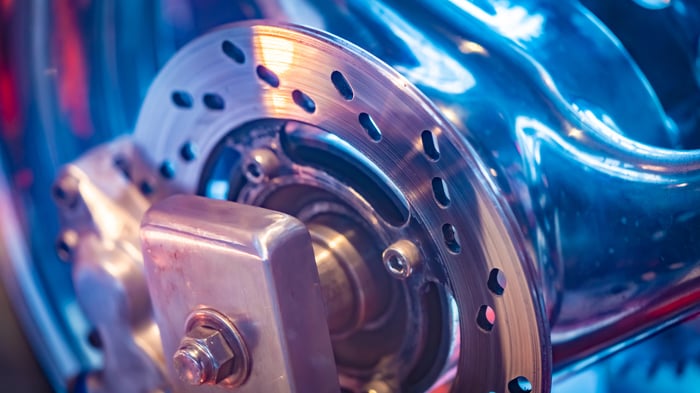 This move would come as a surprise to some, considering that in June, ZF's CEO, Wolf-Henning Scheider, noted that brakes weren't a priority for the company when asked whether WABCO was of interest. But there could be a potential overlooked connection between the two. Recall that ZF plans to invest more than 12 billion euros into autonomous driving and smart mobility, and that WABCO recently signed a $950 million, eight-year agreement to provide driver assistance systems and solutions to an unnamed manufacturer. If both companies are indeed building toward a driverless-vehicle future, there's reason to believe this development has some meat to it. For investors, there's not much action to take, and if you're on the sideline, it's advisable not to make any reactions based on speculation.

Here's Why Shares of Wabco Fell on Thursday

Why Wabco Holdings Lost 11.6% in December

Why WABCO Should Be on Your Watchlist
415%