The model for creating profitable video games -- especially for consoles and PCs -- has gotten squeezed.

There's no question that Activision Blizzard (ATVI 1.34%) is the gold standard among video game developers today. The company dominates PC, console, and mobile games, and has adeptly navigated the evolving environment over the past decade to maintain its lead.

In the last six months, however, Activison Blizzard's stock is down 43%, and if guidance for 2019 is any indication, the company may actually shrink next year. And it's not just Fortnite that's eating into the company's business -- the landscape of the video game industry has changed. 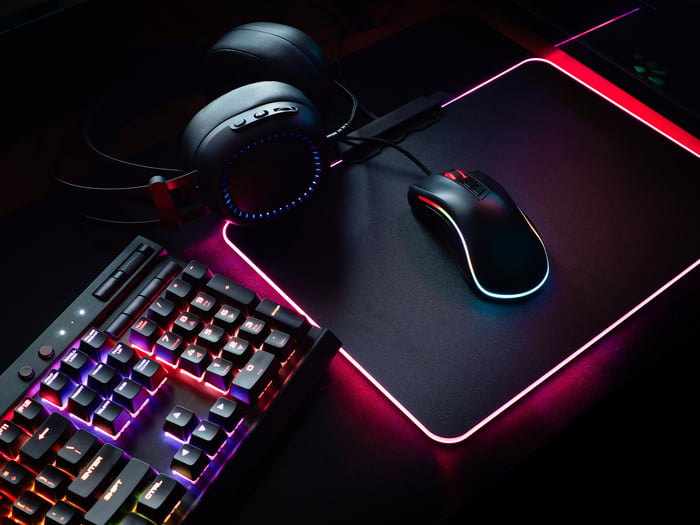 The cost to play is rising

The cold reality in this business is that the cost of video game development is almost always rising. The games get more complicated, and users demand larger and larger worlds, particularly in titles like World of Warcraft and Call of Duty where Activision Blizzard thrives. You can see below that at Activision Blizzard and Take-Two Interactive (TTWO 2.14%), operating expenses have surged as the spend heavily to produce new games. At Electronic Arts (EA -0.21%), expenses are growing more slowly, but that company has been relying more on its classic games to help hold costs down. 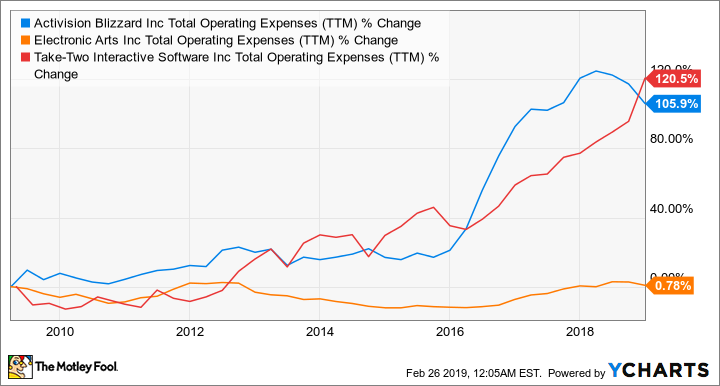 The upside of spending billions of dollars on video game development is that the returns can be enormous if your user base is big enough. It doesn't cost much to add an incremental user, so video game companies can generate high margins if they have scale.

As profitable as the video game business can potentially be, it has been rough over the past year, and the changes coming down the pike may make it harder to make money over the long term.

There are, of course, a number of hardware platforms that customers play games on. The difficulty Activision and other game makers face now is that they need to their games to reach profitable scale with the available users in each of those sub-markets.

That may sound simple, but the scale a game can reach is constrained by the size of the given market, and they vary widely. According to Statista, there are about 2.5 billion smartphone users in the world today, around 150 million modern gaming consoles, and fewer than 10 million high-end gaming PCs sold each year (although the market is growing quickly). In other words, the market you're serving with a given game determines the kind of game you can make, and how much you need to charge for it.

There have been a number of models that have worked over the years in video games. PC and console games used to regularly sell for over $50 up front, and there were many ways for developers to pick up additional revenue by allowing gamers to buy upgrades after the initial purchase. This model works even if just 1 million people buy a game, because the revenue per user is very high. On the other end of the spectrum, mobile games are often free to download, instead relying for most of their revenue on the sales of often-inexpensive add-ons and upgrades -- a model that can work because of the much larger scale achievable in the mobile market.

Consider this example. Let's estimate it costs $100 million to build a game, and that after it's rolled out, any revenue generated has an 80% gross margin for the developer. If the game has the number of users outlined in the first column below and generates revenue for two years, you can see that breakeven revenue ranges from $62.50 per year for 1 million users to just $0.25 per year if a company can reach 250 million users. For perspective, under Activision Blizzard, the Activision studio had 53 million monthly active users (MAUs), Blizzard had 35 million MAUs, and King had 268 million MAUs.

It's this revenue dynamic that investors should keep in mind when watching what's going on in the video game industry today.

The most concerning trend in video games today is that the high upfront sale price products are dwindling. Unit sales for the Call of Duty franchise have broadly declined over the last decade since peaking in 2011. The new trend gaining traction over the past year has been games like Fortnite and Electronic Art's (EA -0.21%) Apex Legends, which are free to play and generate revenue by selling upgrades, also known as the freemium model.

Freemium games can be great, and titles like Candy Crush and Clash of Clans have been huge hits, but those mobile games have the potential to reach hundreds of millions of people, so if their revenue per user is only a dollar or two, they can still be profitable. New games in the mold of Call of Duty or Apex Legends are PC and console games, trying to turn a profit while operating on a scale that's an order of magnitude smaller than mobile platforms offer. And even the successful games require game makers to quickly reach scale and start squeezing revenue out of customers, or the business model falls apart. 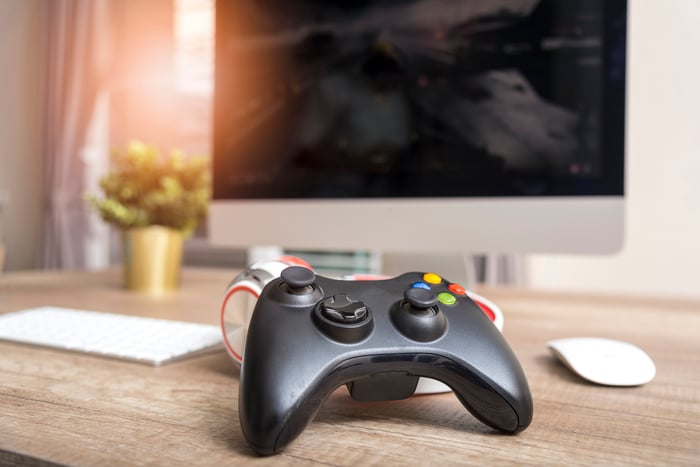 Long term, there are two major problems with freemium in games for PCs and consoles. The first is that such games aren't very sticky. You can try a free title for a day or two, then give it up having spent nothing, which users do all the time on mobile. In its first week, Apex Legends hit 25 million users, but that could just be people trying the game out for free. It'll take months to learn if EA will actually make money off the game.

The freemium model also means game makers need to keep users entertained by frequently adding new content. Fortnite has done this with its "seasons," and World of Warcraft was an early adopter of regular updates. The constant refresh cycle means costs need to be recouped quickly. The result is that a game will either be a smash hit that refreshes regularly, or a huge flop -- there's very little room in the middle.

The video game industry has gone through large changes before, and Activision Blizzard has always navigated them. But it's the big player on the block now, and it must compete with smaller developers experimenting with game concepts and business models that it hasn't yet proven it can build for.

The risk is that companies will be unable to recoup their development costs because users won't be willing to spend as much on in-game purchases as they once laid out for upfront costs plus in-game purchases. Time will tell where the money is, but it could be a bumpy ride as everyone in the industry figures out what the right model is for this environment.