Howard Hughes' (NYSE:HHC) diversified real estate development business delivered solid results in 2018. Not only did the company record the most residential land sales in the history of its master planned community (MPC) division, but its portfolio of operating assets also delivered healthy income growth while condos under construction in Hawaii continued selling at a brisk pace. Meanwhile, the company progressed several strategic developments, which will provide a sizable boost to its bottom line when those assets stabilize in the coming years. 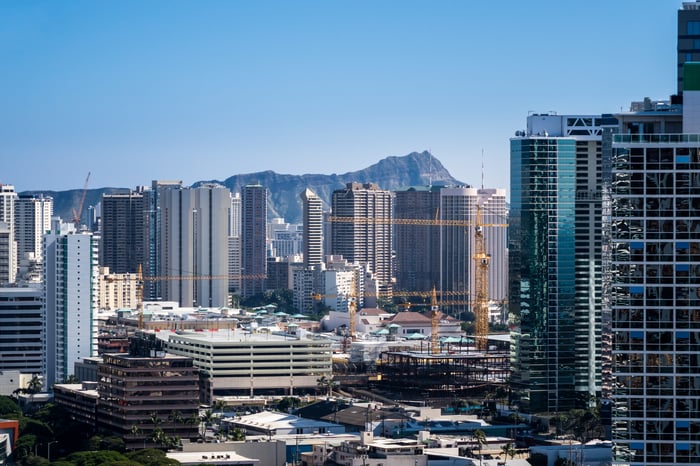 2018 was an outstanding year for HHC across the business as our results demonstrated the ongoing success of our portfolio. Our MPC segment had a record year and generated the highest residential land sales in the Company's history. In Honolulu, we continued our momentum at Ward Village by delivering Ae'o, which is almost entirely sold out, and closing on over half of the homes in the building. We also began construction on 'A'ali'i, which was approximately 80% pre-sold at year end and whose homes will feature innovative design and a turn key living solution that does not exist anywhere in the market. The activity in our Strategic Developments segment was accompanied by continued NOI growth in our Operating Assets segment due to increased occupancy, and we increased our projected annual stabilized NOI target by 25% over the prior year to approximately $318 million.

Howard Hughes made progress on all fronts last year. It continued to generate earnings within its MPCs by selling a record amount of land. Meanwhile, income from its operating assets rose as occupancy increased across the board. Finally, buyers continue to snap up the condos it's building in Hawaii. Last year it pre-sold 80% of the units at 'A'ali'i', which just broke ground in October and has already pre-sold nearly 45% of the units at Ko'ula after launching public sales last month.

Howard Hughes started construction of several properties last year, which along with the continued stabilization of its existing assets, has the company on track to grow NOI by 77% in the coming years. That assumption doesn't include the NOI it eventually expects to generate from the Seaport District upon stabilization in a few years. Add in the likelihood of continued land sales within its MPCs and condos in Hawaii, and Howard Hughes appears poised to grow earnings at a healthy pace in the coming years.