Shares of Fitbit (NYSE:FIT) slumped on Thursday after the wearables specialist reported its fourth-quarter results. While the company beat analyst estimates for both revenue and earnings, it issued disappointing guidance. As of 11:30 a.m. EST, the stock was down about 12.7%.

Fitbit reported fourth-quarter revenue of $571.2 million, up 0.1% year over year and around $2 million above the average analyst estimate. Fitbit sold 5.6 million devices, up from 5.4 million in the prior-year period. Average selling price declined 2% year over year to $100, pushed down by the launch of the Charge 3 fitness tracker. 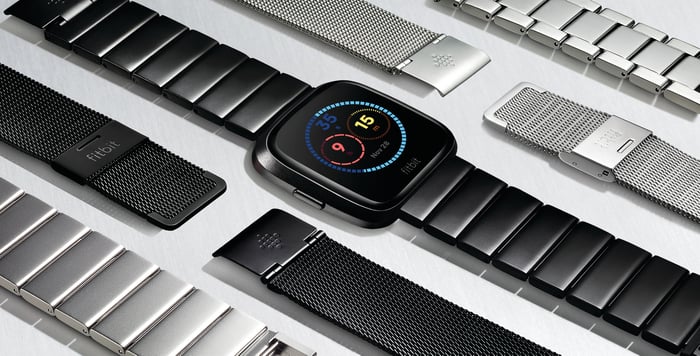 For the full year, 44% of Fitbit's revenue came from smartwatches. That's up from just 8% in 2017. Fitbit launched the affordable Versa smartwatch in 2018, providing a low-cost alternative to the Apple Watch.

Non-GAAP earnings per share came in at $0.14, up from a loss of $0.02 in the prior-year period and $0.07 better than analysts were expecting. Gross margin tumbled due to the shift toward smartwatches, but much lower operating costs pushed up the bottom line.

Fitbit had a decent holiday quarter, but its guidance overshadowed those results. First-quarter revenue is expected between $250 million and $268 million, up 1% to 8% year over year. Devices sold will increase, but average selling price will decrease. Analysts were expecting revenue of $272.3 million.

Fitbit's turnaround is going to take time, as evidenced by its weak guidance. The company managed to produce positive free cash flow in 2018, but that included a substantial benefit from working capital. That won't repeat to the same degree this year.

While Fitbit's Versa smartwatch appears to be a success, slumping tracker sales are still weighing heavily on the company's results.