Please ensure Javascript is enabled for purposes of website accessibility
Log In Help Join The Motley Fool
Free Article Join Over 1 Million Premium Members And Get More In-Depth Stock Guidance and Research
By Maxx Chatsko - Updated Apr 10, 2019 at 10:29AM

Plants aren't always the perfect medium for producing high-value compounds. Turns out, cannabinoids can be brewed with microbes instead.

Investors cheered as brewing companies made moves into the nascent and increasingly deregulated cannabis industry in 2018. Canopy Growth (CGC -5.96%) won a $4 billion investment from beer giant Constellation Brands. Cronos Group (CRON -0.88%) linked up with Anheuser-Busch InBev to research beverages containing cannabinoids including THC and CBD. Other consumer food brands are sure to follow.

While the brewing industry represents an important source of capital for the fledgling cannabis market, brewing science may represent an important source of future production capacity of cannabinoid compounds. Major cannabis producers ranging from Cronos to OrganiGram Holdings (OGI -3.20%) have partnered with analytical biotech labs exploring how to ditch inefficient plants grown in greenhouses in favor of genetically engineered microbes brewed in bioreactors.

It could prove to be an important relationship for both industries if it works, so a pioneering expert weighed in on whether bioreactors might disrupt the cannabis ecosystem. Kevin Chen is the CEO and cofounder of Canadian startup Hyasynth Biologicals, which has been working on microbial cannabinoids for years. 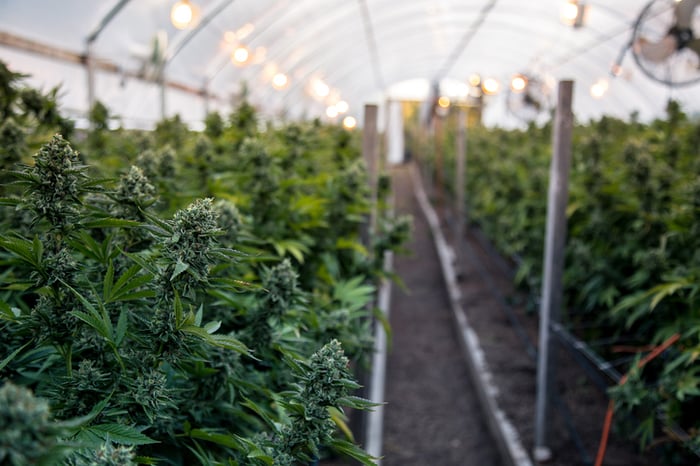 The promise of biotech in cannabinoids

The idea floating around is simple: Take the cannabinoid genes from plants, insert them into a microbe, tweak them to optimize function, and use fermentation to produce large volumes of cannabinoids or cannabis resins with specific ratios of cannabinoids.

On paper, utilizing industrial biotech offers several notable advantages over plant-based production. Indoor cultivation of cannabis may only allow four to six harvests per year, whereas a single bioreactor can provide more than 23 harvests per year. While a 1 million square-foot greenhouse might yield only 16 metric tons of cannabinoids per year, a fermentation facility of the same footprint and investment could generate in the neighborhood of 1,000 metric tons annually, which is why microbial fermentation has been such an attractive technology for food, pharmaceutical, and industrial chemicals for so long.

Just getting cannabinoids and resins from plants requires a costly extraction step. And then the THC content of a product varies wildly from one harvest to the next -- not ideal for patients who rely on specific daily doses. Microbial production could directly produce cannabinoids with less intensive extraction steps and resins with specific cannabinoid content. It would also be much easier for healthcare regulators to ensure quality and safety of products in such a facility. 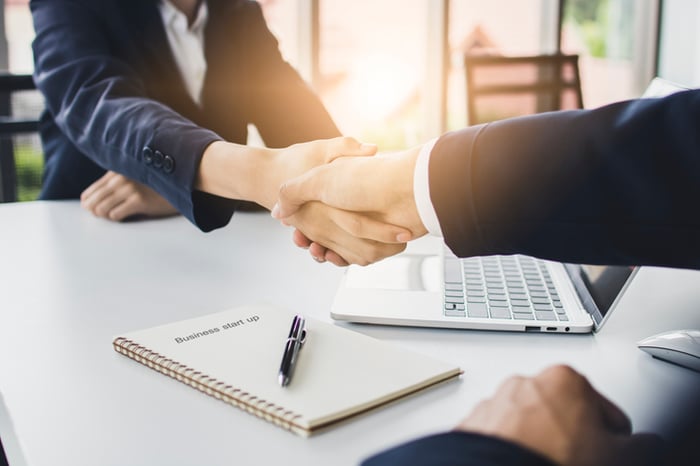 Will these cannabis-biotech partnerships yield success?

Suddenly flush with cash, cannabis growers are intrigued enough by the potential of brewing cannabinoids to fund exploratory R&D projects. That includes a sizable project between unicorn biotech Ginkgo Bioworks and Cronos Group, as well as a partnership between industrial biotech pioneer Amyris (AMRS -4.54%) and an undisclosed cannabis customer. Synthetic biology conglomerate Intrexon (PGEN -0.80%) is also working on microbial cannabinoid projects, although it hasn't yet announced its partners or customers.

While the aforementioned deals and projects started being announced in 2018, Hyasynth Biologicals has been working on microbial cannabinoids for years, and is a licensed dealer under the Narcotic Control Regulations of Health Canada. The Canadian biotech received a $10 million investment from OrganiGram Holdings to begin scaling its process, and it says it could have a commercial process proven in about 12 to 18 months. Hyasynth Biologicals CEO Kevin Chen said:

Plants can be used to produce small quantities of specialty pharmaceutical compounds, but the doses and scales required for cannabinoid medicinal products are an order of magnitude larger. The cannabis production process requires a huge footprint, has low yields, and results in inconsistent chemical composition -- an especially important consideration for global brands in medicine and food that need consistent product quality worldwide. Traditional fermentation represents a more scalable, efficient, and higher quality production process for the industry.

Here's a breakdown of the publicly announced biotech projects in cannabis:

While the above companies made headlines and enjoyed incredible one-day stock price movements by announcing cannabis deals, each has struggled to deliver.

Most projects at Ginkgo Bioworks have yet to move beyond lab-scale development, and the company has struggled to follow through on partnerships, including one with Amyris.

Meanwhile, Intrexon has struggled to commercialize its robust portfolio of biology-based products on initial timelines, and a vague press release on microbial cannabinoids doesn't give investors much information.

Put another way, biology is difficult to engineer -- period -- no matter the amount of capital at a company's disposal. Will investing in dozens of projects allow these companies to finally deliver a profitable commercial product to the cannabis market? Or will smaller teams with a deep understanding of the science prove more successful?

Microbial cannabinoids could be big, but it's early days

Biology and cannabis are tightly linked for obvious and less apparent reasons. There are more than 100 known cannabinoid compounds produced by plants. The human brain contains dedicated cannabinoid receptors -- and your body even produces its own cannabinoid compounds called endocannabinoids. In other words, there are plenty of genetic components available to explore, and any new processes that result could be better suited for industrial production than plants in greenhouses.

However, engineering biological systems with reproducible and predictable function remains difficult. Despite the potential of industrial biotech on paper, the reality is that this sector of the bioeconomy has generally failed to deliver on its lofty promises when relying on highly engineered microbes. That said, the opportunity is too significant to overlook for cannabis growers. It will take time to see which, if any, microbial cannabinoid approaches work, but if they do, it could be a huge differentiator for investors looking for a cannabis play with an edge.