Gold has been a store of value for millennia, and even now, many investors see gold as the ultimate safe haven asset. Yet recently, another precious metal became more valuable than gold -- and it's not the one you might expect.

For a long time, gold and platinum have battled it out for supremacy atop the precious metals markets. Since the 1970s, platinum has usually been worth more than gold, only occasionally dropping beneath the yellow metal's price for short periods of time. Yet over the past few years, gold prices have surpassed platinum's, and recently, the price disparity widened to more than $500 before narrowing slightly in the past couple of weeks.

Now, though, a new player has taken over the top spot. Palladium prices have more than doubled since the end of 2016 and are up almost 25% in just the first two months of 2019. That's sent the rare metal's price above gold's for the first time ever. 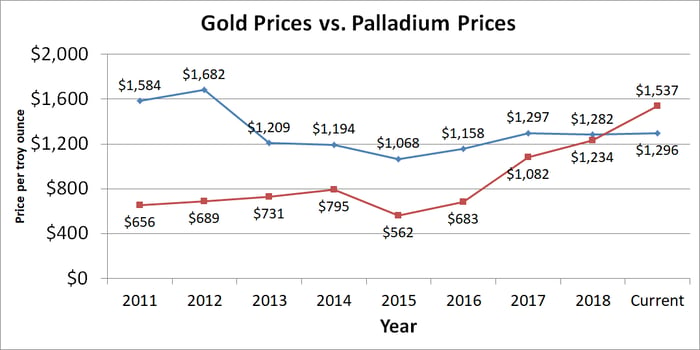 Most people have never even heard of palladium, but it's climbed from prices of just $200 per ounce a decade ago. The reason: Palladium is used heavily in catalytic converters for gasoline-powered engines. Platinum also has similar industrial uses, but it's needed in similar pollution control measures for diesel engines. With several scandals in recent years surrounding diesel car manufacturers that misrepresented fuel efficiency and emissions claims, many customers have soured on diesel automobiles in favor of gas-powered vehicles. That's driven up demand for palladium, but supplies of the metal are quite limited.

Eventually, it's possible that auto manufacturers will work toward adjusting gasoline-based catalytic converters to accept platinum as an input -- if it stays cheaper. However, it takes effort to make that shift, so automakers are likely to be slow in doing so.

Precious metals can be volatile, and as gold investors saw in the 2000s, when prices are low, they can vault higher fairly quickly over time. It's uncertain whether palladium can sustain its current surge, but its rising prices make both gold and platinum look cheap by comparison.